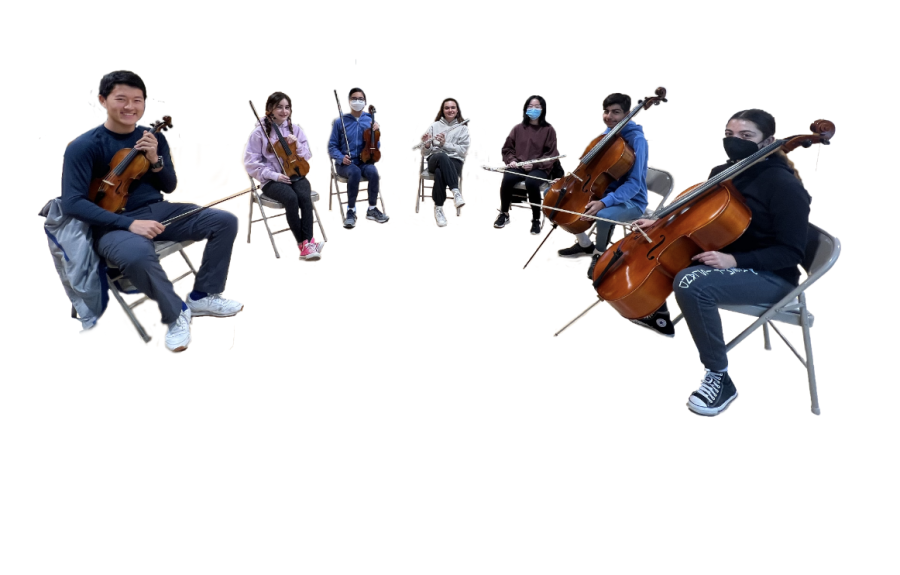 For chamber musicians Leo Wang, Enrica Parmigiani, Ava Elliot, Caroline Jiang (all ’24), Susanna Barouch, Presley Jacobson, and Rohan Jayaraman (all ’25), rehearsals and concerts are finally returning to normalcy after the pandemic. The Vanguard sat down with the musicians to listen in on students sharing their passion for music.

How long have you been playing your instruments?
Leo: Should we just go around in a circle? Ava, you go first.
Ava: Four years.
Rohan: Nine years.
Caroline: Six years.
Enrica: Five years.
Susanna: I think around nine? Yeah, I think nine.

What piece are you all currently working on, and how would you describe it?
Leo: Um, who knows it really well?
Ava: It’s called Bachianas Brasileiras, [it’s] a tribute to Bach, but it’s more modern. There are still some aspects of Bach’s music in there, so it kind of takes his style and adds more to it.
Leo: It was composed by Heitor Villa-Lobos, who is… Argentinian?
Dr. Cless (from the hallway): No, he was Brazilian.
Leo: Brazilian, Brazilian. My bad.
Presley: In the piece, there’s a lot of back and forth. We do a lot of call and response with one another. This makes the piece dynamic to play with a group.
Ava: It was also originally written for a group of cellos [called] a cello choir. It makes sense that this was a tribute to Bach, who is famous for his cello suites. The music was then adapted and arranged for our group.
Rohan: It has quite a unique rhythm as well. There are a lot of polyrhythms, which makes the piece stand out. It also makes it pretty hard [to learn].

Do you all have a favorite memory as a member of this group?
Presley: I enjoyed the opportunity we got to play with the chorus during the Valentine’s Day Concert in February. I really liked that we got to play one of our orchestra pieces along with singers.
Leo: Yeah, that was really fun. I enjoyed playing with musicians who didn’t play classical instruments as it was a new experience for me. The event itself was also cool and we got to hear the other pieces performed by the choir.

How did COVID affect your dynamic as a chamber group?
Leo: With chamber music, you really need to be expressive and give visual cues to other people through body movement. Most of that body movement was limited as we had to sit further apart and we couldn’t use facial features as cues. This helps to tell other people when to hop into the piece and start playing and stuff, as there isn’t a conductor in chamber music. This nonverbal communication is my favorite part of chamber music, so it sucked to see it limited.
Presley: For the wind instruments, it must have been extra difficult. They had to wear special masks to cover their mouths while they practiced during our school rehearsals, which seemed hard to play with. They also had to wear bags over their instruments.
Rohan: I can’t imagine how difficult it was for them.
Caroline: Thankfully, we didn’t need to wear masks during the winter concert. That was really nice.

What important qualities has working in this chamber group taught you?
Leo: …Patience. [They laugh]
Rohan: Patience is definitely one. Especially since [this] chamber group is on the larger side compared to others. It’s important for us to always be attentive and listening.
Leo: People have all sorts of ideas on how to interpret the music. Finding a middle ground of agreement despite having some conflicting views is something that we’ve become accustomed to.
Presley: Compromise, trust, and listening are all a big part of this.
Ava: Our chamber group has such a weird arrangement too. Three violins, two flutes, and two cellos isn’t a typical group whatsoever. Learning how to get used to that and the different sounds coming.