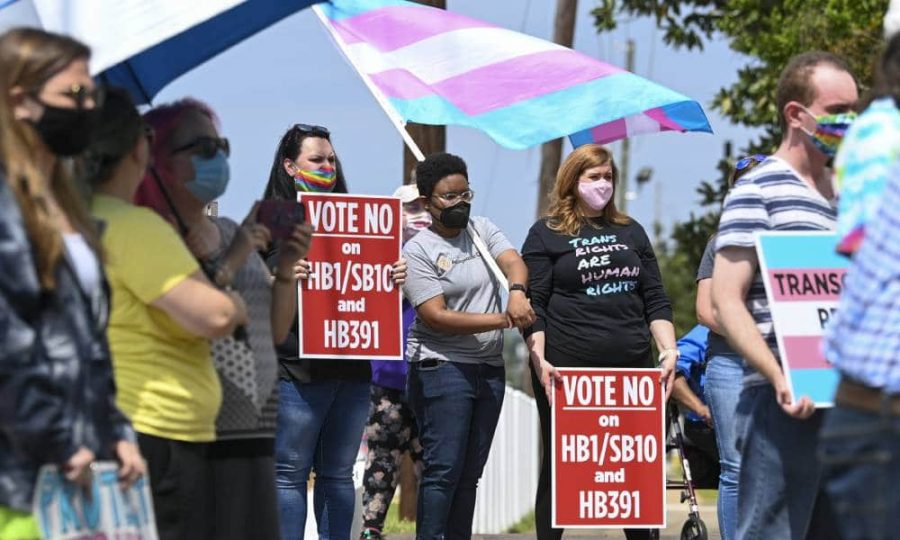 Since February, two companion bills known as HB1/SB10 have been edging closer to implementation by the Alabama Senate. While the bills’ name may look like a jumble of numbers and letters to some, they are a nauseating threat to the transgender community. HB1/SB10 ban gender-affirming care for those under 19. According to CBS News, not only are trans youth now unable to seek medical help, but doctors in Alabama face prison time for offering them care. These bills, along with over 40 other transphobic laws going through state legislatures, demonstrate lawmakers’ pitiful understanding of transgender issues. Despite the essential place gender-affirming care has in the transgender community, many state governments attack this life-saving field. This misunderstanding, as Alabama state senators demonstrated, primarily stems from misconceptions about transgender people, a perverted perception of gender-affirming care, and bigotry shown towards LGBTQ+ people.

The American medical community has started progressing from systematic transphobia, but local legislators continue to resist scientific advancement. One key aspect contributing to this resistance is a misinformed understanding of gender dysphoria, a feeling of significant distress that many transgender people experience from the incongruence between their gender and the physical characteristics of their assigned sex. For example, a trans man may experience discomfort regarding the appearance of wide hips or a higher voice. Some non-trans individuals, like those in the Alabama Senate, assume that this discomfort is the result of a mental illness. gender dysphoria isn’t an illness at all. It’s a reaction to a biological mistake.

In 2013, the American Psychiatric Association’s Diagnostic and Statistical Manual (DSM-5) removed gender dysphoria from a list of mental disorders, recognizing the legitimate experience of transgender people. As the DSM-5 notes, dysphoria doesn’t cause discomfort, but the inability to receive gender-affirming care does. Unlike many Alabamian politicians, the physician community shares an educated view that transgender people are healthy individuals. Why does Alabama resist the recommendations of medical experts?

Let’s look at what the legislators say. In an interview with the Associated Press, Alabama Republican Sen. Shay Shelnutt claimed that “children aren’t mature enough to make these decisions on surgeries and drugs,” a careless and misinformed belief. HB1/SB10 ban care not just for children, but for all trans young adults under 19.

Shelnutt and other senators also demonize gender-affirming care, creating conspiracies about spurting needles and invasive surgeries. But these claims are far from the truth. Gender-affirming youth care is a mix of therapy, general medicine, and closely monitored puberty blockers and/or hormones. The “drugs” Shelnutt detests are nothing radical. In fact, the same puberty blockers used for transgender youth were approved by the Food and Drug Administration in 1993 and have been safely prescribed for nearly 30 years for other health conditions in children. The sexual reassignment surgeries Shelnutt imagines are never performed on minors. He and other politicians are just fear-mongering.

Shelnutt also misleadingly assumes that transgender youth make these decisions alone. Gender-affirming care, however, isn’t an unregulated field. Nowhere in the U.S. can a minor begin puberty blockers or hormones without parental consent. Alabamian pediatrician Terrance Weeden expressed his and other physicians’ “grave concern” about the proposed bills, criticizing state senators for restricting doctors’ ability to treat patients. Despite the clearly inaccurate and dangerous contentions held by supporters of HB1/SB10, the bills were still approved and passed, respectively, within state legislature.

For all the concern Alabama legislatures claim to have for children, they don’t give a damn about transgender youth. As the Campaign for Southern Equality stated, “[HB1/SB10 are] effectively endangering many possible lifelines for a transgender child.” To whom can a struggling trans teen in Alabama go for help? Their medical and education systems are not even allowed to help them now; God forbid their parents aren’t supportive. A 2016 LGBT Health study found that social rejection increases the odds of substance misuse and suicide attempts for transgender adolescents by 50%. How can the Alabama Senate claim to care about their young constituents when their laws could lead to more deaths?

Horrifyingly, the bills have faced little opposition. SB10, in fact, passed through the Alabama Senate by a vote of 23-4. This means 85% of senate votes were cast in favor of SB10; 85% of votes were cast against the rights of transgender youth. We see these narratives travel outside of Alabama, too, to other states and even the capital. HB1/SB10 are localized demonstrations of a far more toxic threat to civil rights across America. If these bills alarm you, contact your representatives or support organizations protesting Alabama’s decision: the American Civil Liberties Union of Alabama or Southern Poverty Law Center. These bills aren’t just a misunderstanding. They’re discrimination. They’re transphobic. They’re an attack not just on transgender youth themselves, but on the right we all have to seek the best for trans friends, siblings, and children.