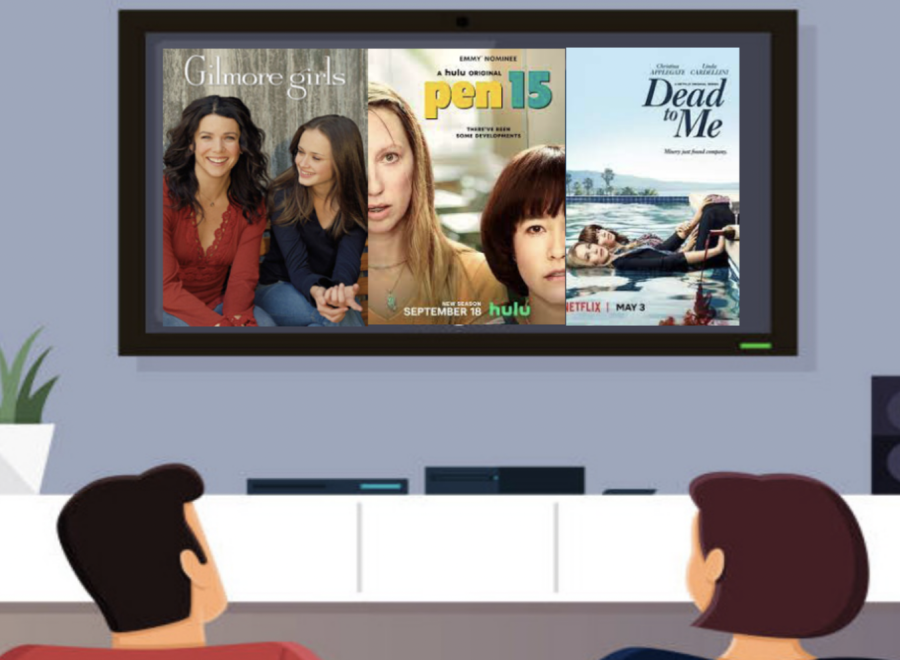 Tina and Amy, Thelma and Louise, Ann and Leslie: what do they have in common? Welcome to Episode Two of “Are You Still Watching?”, where we will be discussing female duos! Girl power, am I right? Today I’ll introduce a few shows you may not have heard about. This is my favorite category of TV shows, and I have more suggestions I can’t fit into these 800 words, no matter how hard I try, but if you stick with me, hopefully, you’ll have a good start.

“Gilmore Girls” is, and always will be, a classic. It has maintained its popularity since the early 2000s and continues to be a staple in American TV culture. Though you would have to be living under a rock to be unfamiliar with this show, I’ll gift you with a summary anyway: the story follows Lorelai Gilmore and her teen daughter, Rory, as they adventure through life, accompanied by the kooky characters in the small town of Stars Hollow, Connecticut.

I hopped on the bandwagon for this show pretty late and only started watching after consistent pressure from two adamant friends. I haven’t even finished the show yet, and although I try to maintain my reputation as a committed binge- watcher, I am taking my sweet time with “Gilmore Girls.” If you are a new watcher, be in the mood for the fast-paced dialogue and the characters’ quick wit. But if you’ve already seen the show and are looking for something new, here are some of my other favorite shows with two strong female leads who share complex relationships!

If you liked “Gilmore Girls”… might I recommend “Pen15.” This show is criminally underrated and incredibly funny. Actors Maya Erskine and Anna Konkle play their 13-year-old selves as they navigate the rough waters of middle school and puberty together.

I first came across this show through Instagram, where I saw at least four separate people post about it in one day. It felt like the universe was sending me a sign, and it felt imperative that I begin watching immediately. Its weirdness was compelling, and I was unable to remove myself from the couch as the show unfolded. The concept of two adult women playing teen girls is odd, but the acting is so spot-on that you end up forgetting about the age difference soon after it starts.

“Pen15” has an awkward style of humor that often inflicts cringey second-hand embarrassment on the watcher. It will bring you back to times of bad teeth and bad haircuts (we’ve all been through it), as well as classic Y2K vibes (you’ll never go an episode without mention of Britney Spears or low-waisted jeans). It may not be for everyone, but I recommend giving it a try, especially if you are a comedy fan in the mood for a quick watch—with only one-and-a-half seasons released so far, this is the show for you.

I’m not one for blood and violence in TV shows, but I make an exception for “Killing Eve.” For fans of the enemies-to-lovers trope, this is a great show to consider. Created by the brilliant Phoebe Waller-Bridge, the show is dark, genius, and captivating. Eve Polastri, played by the fantastic Sandra Oh, is a British intelligence agent who is after a European assassin, Villanelle, played by Jodie Comer, and will stop at nothing to find her. You may even become invested in their unlikely romance.

“Killing Eve” is not for the faint of heart! It can be quite intense, so I would not advise watching if you know you don’t do well with violence. I can only deal with it in small doses. Villanelle’s tactics are gory, but the cinematography and writing are clever and captivating, and I find the show alluring. My strategy is to pair it with something lighthearted and hope I’ll be able to sleep at night.

I have saved the best for last; I cannot stop gushing about “Dead To Me.” Christina Applegate and Linda Cardellini star in this dark comedy about a woman who, mourning the loss of her husband, makes an unlikely friend at her grief group. The show is full of twists and turns, and I guarantee you’ll find yourself wanting more the second it’s over. I cannot even begin to describe how much I love this show, but to give you an idea: I watched the whole show two times in less than a week and watched it a third time a month later. I never hear as much buzz around “Dead To Me” as it deserves, and I wish more people would appreciate it as much as I do.

That’s it for now! Feel free to email me (dsarkis@bbns.org). I am more than happy to chat about your favorite TV shows at any time. Keep on watching! *Roll Credits*