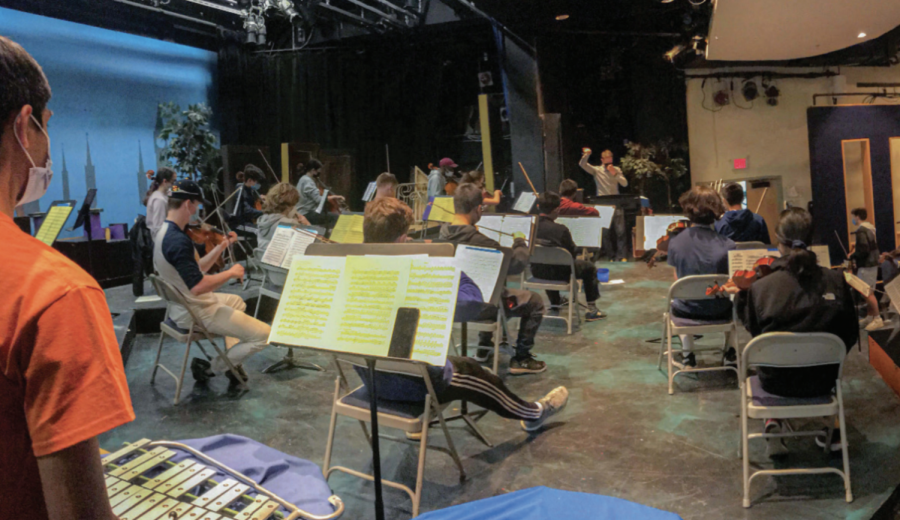 At the beginning of every Tuesday night acapella rehearsal this spring, the group warmed up with “jam and toast,” a game where singers layer their voices into an improvised song.

“It’s really fun to start out rehearsals, to get energy going, and to just enjoy music with people who also find a lot of passion in singing and music,” Chorale and Acapella Singer Bea Scanlon ’21 said.

In fact, all of the school’s singing groups and the school orchestra have had to improvise this school year, their efforts culminating with in-person performances in the courtyard on June 4 at 4:30 p.m. and at 197 Coolidge Hill Rd. on June 8 at 4:00 p.m., respectively.

With the exception of an outdoor concert this fall (see “Musicians sync up for contemporary courtyard performance,” Vol. 49, No. 5), school singers and orchestra members spent 2020-1 relying on video recordings and webinars to share music traditionally performed in the Upper School (US) auditorium or the US Chorale room.

“Rehearsals were very much individual and on your own rather than as a group,” Bea said. “Now that we’re together, we’ve been super productive, making up for lost time.”

The singers’ last in-person concert was in January 2020, Bea added, and they have worked hard to maintain vibrant energy since then.

“It’s been such a long time since we performed together on stage, and I’m just really excited that we get to sing together again because I love the group so much.”

Chorale and Acapella Singer Alexandra Fabbri ’23 said singing this year has been an act of perseverance.

“It was harder to get that sense of community when we were online. Subsequently, it was more difficult to muster up motivation for anything when we were on Zoom,” Alexandra said.

Looking ahead to the June concert, Alexandra said she is excited for Chorale to perform “One Day,” by Matisyahu.

“It’s about having hope that things will get better,” she explained.

In addition to “One Day,” Chorale will sing “Varadi,” an oral folk tradition song from the former Soviet Republic of Georgia, and “Quiet,” by MILCK. Acapella will sing “715 Creeks” by Bon Iver, “Because” by The Beatles, and “We Shall Be Known By The Company We Keep” by MaMuse.

Chorale Teacher Joel Sindelar misses the simplicity of pre- pandemic choral groups, he said, and he looks forward to singing at the school after the pandemic.

“One thing I loved about choruses, when I first sang in one, was how minimalist it could be,” Mr. Sindelar said. “People could show up with nothing and sing beautiful music together. With COVID, it’s tremendously challenging to make the experience as satisfying.”

While gathering remotely presented the opportunity to bring in local and distant speakers such as Boston-based singer and voice teacher Zoë Knight and Bongani Magatyana from Cape Town, South Africa, Mr. Sindelar said, he was excited to lead the group in person again after returning from Spring Break.

“It was a little chilly but much preferred by most Chorale members to the Zoom alternative,” Mr. Sindelar said. “The joyful experience of singing in community does not translate in a remote session.”

The US Orchestra, meanwhile, began the year practicing outside and moved inside once in possession of special masks and instrument covers that would protect the performers (see “School creatives work with presence and absence,” Vol. 49, No. 4). Oboist David Min ’22 recalled the group’s first in-person practice with all four grades as one of his favorite moments early this spring and said he is excited for the ensemble’s live performance of “Banner” by Jessie Montgomery and of Ludwig van Beethoven’s 6th Symphony.

“Recording and editing different students’ audios into a master recording of a piece worked last spring,” David said, “but the excitement and joy of playing and performing in real time, together, cannot truly be replicated.”

Though the Orchestra concert traditionally takes place earlier in the year, the pandemic challenges pushed the concert to the last weeks of school, Dr. Cless said.

“Given the outdoor setting, the challenging rehearsal schedule, and an ambitious goal to perform a full concert of challenging repertoire, the concert will tie a bow on the school year instead.”