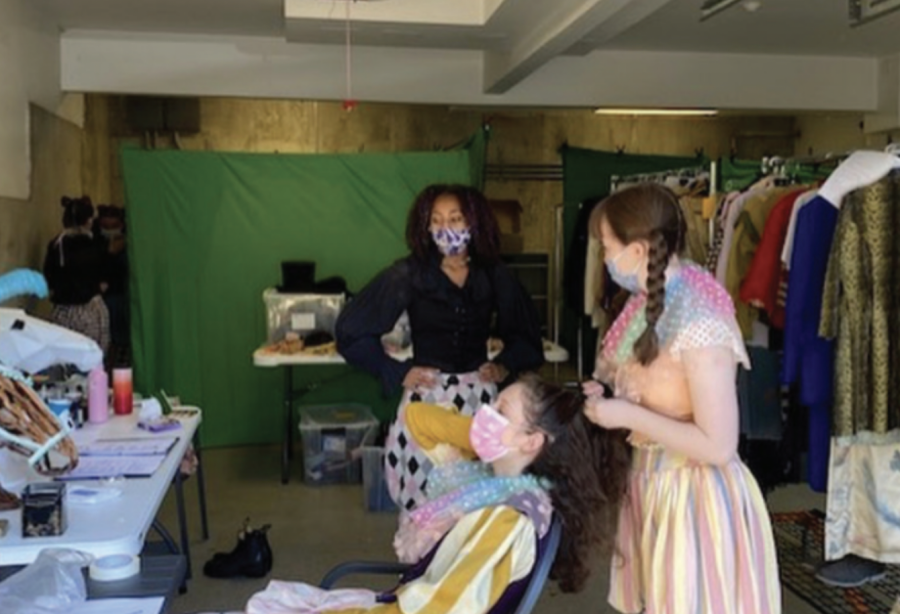 In this spring’s rendition of “A Midsummer Night’s Dream,” Hermia and Lysandra must profess their love for one another mask-clad and six feet apart. COVID restrictions and gender switches were only a few of Upper School (US) Theater Director Ross MacDonald’s adaptations to Shakespeare’s original play, which he renamed “Dream” and, with the help of US Music Teacher Elliot Cless ’02 and US Chorale Teacher Joel Sindelar, made into a musical.

“It doesn’t fit the traditional idea of ‘A Midsummer Night’s Dream,’ but it’s an engaging version,” Mr. MacDonald said. “We’re trying to encourage everyone to bring their own stories to this multilayered production.”

The school’s rendition of the traditional play includes myths, carnival, and folklore, Mr. MacDonald said, and explores identity and relationships against the backdrop of the country’s current social landscape.

The adaptation also incorporates musical and design elements from a variety of cultures ranging from Commedia dell’arte, an Italian style from the 1600s, to the Mediterranean culture of the late 1970s.

“This musical, as all musicals should do, takes one on a journey into a new world so that the audience members come out on the other side with a sense of joy and hope,” Mr. MacDonald said. “We have been through such a trauma, not just this nation, but across the world, and if the fall play, ‘OR21,’ looked into the elements of darkness, this production takes us out of the shadows into resolution.”

Dr. Cless, Mr. Sindelar, and Mr. MacDonald together composed 23 songs inspired by the text. Mr. Sindelar transformed monologues into lyrics and created accompanying music with Dr. Cless, while Mr. MacDonald contributed lyrics to the song, “Seven Leagues Away,” sung by Dalia Dainora Cohen ’21 and Dunia Sarkis ’22 as Hermia and Lysandra, respectively, and helped produce the songs. Nicky Tao ’21 also penned a musical number for Oberon called “This Is Thy Negligence.”

“‘A Midsummer Night’s Dream’ provided fun, zany, and quite poignant material to migrate into song form,” he said.

In composing its music, Dr. Cless said, he sought to emphasize the parts of the text that relate to current events.

“In Act II, Titania, played by Sophie Chadha ’21, gives a powerful plea to Oberon, asking him to stop meddling with the natural world and causing human suffering,” Dr. Cless said. “I read this text from the standpoint of human ego and greed causing or worsening global crises such as climate change and the global pandemic. Therefore, I set Titania’s speech as a fiery and hopefully moving song.”

Dalia said she was excited to sing songs never performed before.

“It’s cool because the music was written for our characters, and Mr. MacDonald, Dr. Cless, and Mr. Sindelar could very easily fine-tune it to our singing abilities,” Dalia said.

Costume Designer Louise Brown, who researched 1970s “hipsters,” 19th-century carnivals, and the Mediterranean in preparation for the production, said she saw the show as an opportunity to reinterpret the original through new musical and aesthetic elements—a contrast with the school’s last production of the show in 2006, which she said was a more traditional interpretation.

The costume team was able to get creative, Ms. Brown said, when designing a donkey mask for Bottom, played by Charlie Druker ’22. So that it seemed magically sculpted, she explained, the headpiece was constructed from driftwood and an intricate origami template.

“We really wanted to do something a bit different with the carnival theme, and it made sense to me that under Oberon’s spell, Titania would see a beautiful circus horse and fall in love with it, as beauty is a weakness of hers,” Ms. Brown said.

US Theater Designer and Production Coordinator Eugene Warner said while the pandemic made indoor theater space unavailable, the outdoor setting at 197 Coolidge Hill Rd., a property the school owns just behind the US, proved a worthy consolation. Mr. Warner also noted the careful consideration of the crew in creating a set that would make the fairy world palpable.

“The set design makes use of theatrical illusion in the Faerie world to contrast with the ‘real’ world trappings of the courtiers,” Mr. Warner said. “For example, in the Faeries’ locations we set enlarged, painted flowers among the natural foliage on the grounds, but we used real drapery in the Courtier’s location. The film was shot in daylight, so the ancient ruins we created for the Faeries were flat panels painted blue to make it look as if it were nighttime.”

Sophie said some of her fondest memories from rehearsals included the comical interactions between characters.

“I love some of the lovers’ insults for one another,” Sophie said. “Two of my friends, Dalia and Christian [Trodden ’21], have this one scene where they’re just chasing each other around, literally across the lawn, and shouting things like, ‘Oh, you acorn, you mollusk, you dwarf!’ Especially because we’re such good friends, it’s a very funny scene that I love to watch.”

US Film and Video Teacher Christopher Gaines and some of his students filmed the performance, and Mr. MacDonald plans to release the production in video form on the school’s website on June 7.