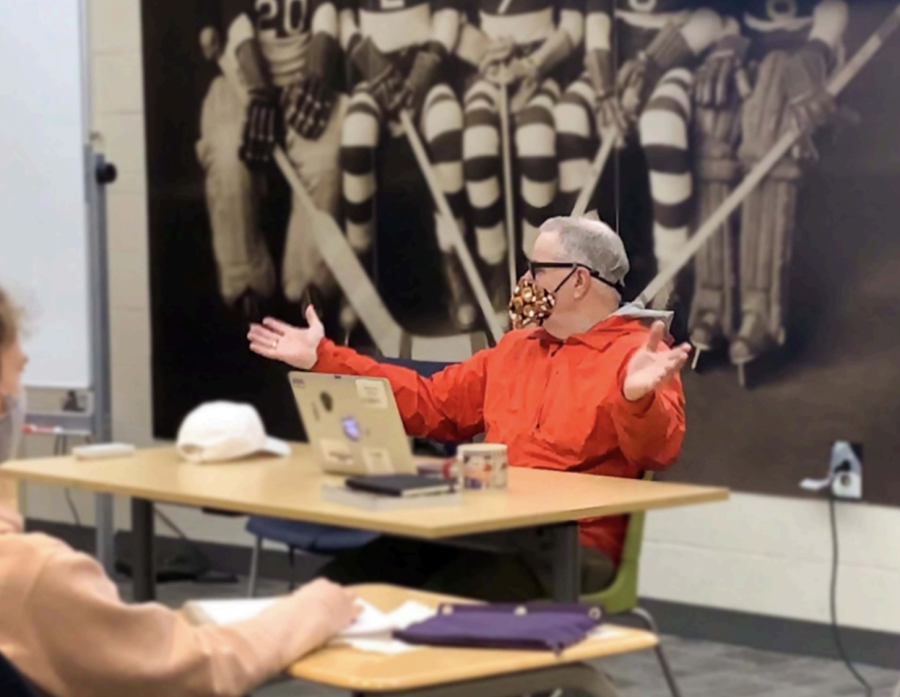 According to History and Social Sciences Teacher Leigh Hogan, the word “plan” is no longer in his vocabulary after 37 years at the Upper School (US).

“I prepare for my classes, but I have a joke with my seniors: ‘I hope I can stay with my class plan’… I never can stay with a class plan,” he said. “Sometimes I really try to plan out the class, and then I get to the end of the class and I say, ‘I shouldn’t do that again.’”

Mr. Hogan said he’ll bring this philosophy with him as he takes a year off, splitting his time between Oregon, where his three sons reside, and Massachusetts.

“I’m getting in my Prius after graduation, and I’m going west,” he said. “I’m going to spend a month or two out there, and I don’t have a ticket coming home. I’m very content to take life a day or two, or a week or two, at a time.”

From 1983 to 1990 Mr. Hogan was an assistant coach of football and hockey and the head coach of varsity baseball, and before the pandemic, he was in charge of organizing Monday morning assemblies. He has spent most of his tenure teaching a variety of history courses, including Global I and Global II History, US History, World Religions, and Advanced Placement (AP) Comparative Government.

One highlight for him was between 2003 and 2005, Mr. Hogan said, when the history and social sciences department globalized their curriculum, which involved more learning on teachers’ parts.

“A lot of us teachers were taking classes on Africa and Asia. That was the greatest. That was like getting an injection of adrenaline for the rest of your career. It was like, ‘Oh, this is fabulous.’ The more I got to know, the more I enjoyed teaching.”

Mr. Hogan also said he feels as though he’s learning as much as the kids in his classes.

“The conversations and the exchanges with students so often helped me think about the material,” he said. “The good thing about our school is people really are trying to learn.”

Jack Theobald ’22 said he views Mr. Hogan as a father figure and admires his compassion. During quarantine last spring, Jack said, he wanted to use his time to write about the US government’s failure to prevent the attacks on 9/11, and knew he’d need help getting started.

“When I brought the idea up to Mr. Hogan, he immediately agreed to help guide me through the process,” Jack said. “We had weekly meetings over Zoom, and he was a huge reason why I was able to complete this really cool project.”

Chinese Teacher Yinong Yang described Mr. Hogan as among the more genuine people he has ever met and the colleague with whom he’s conversed the most during his tenure.

“We’ve talked about many things at lunch in the Commons and over coffee breaks in the faculty lounge,” Mr. Yang said. “Early on we were bonded with a common interest in Boston professional sports teams, politics, and US-China relations. I was fortunate to have had him as my unofficial mentor when I just started teaching at BB&N and even luckier to call him a friend years later.”

Advisee Eli Jensen ’21 said he sees Mr. Hogan as more of a friend than a mentor, citing their golfing trips and Mr. Hogan’s advice during an advisory this February on how to make a killer breakfast.

“There was no rhyme or reason to it,” Eli said, “but we sat through his lesson about the importance of breakfast at 8:30 in the morning.”

“He’ll go off topic if it means his students are enriched with information that they are passionate about or curious about. He values the life lessons above the traditional learning path, and it makes us better students,” she said.

Michael Skocpol ’06, once a law clerk at the Supreme Court and now a lawyer in Washington, D.C., said that while following the course textbook was necessary to do well on the AP Comparative Government test, Mr. Hogan was not interested in sticking to its pages.

“Mr. Hogan trusted us to absorb the textbook parts of the class very quickly in order to create a lot of space to go beyond the AP curriculum and challenge us in different ways,” Mr. Skocpol said.

More recently, the course material, specifically Taoism in his World Religions class, inspired Mr. Hogan to learn the practice of tai chi, a form of moving meditation, he said. After attending tai chi workouts over a decade ago, Mr. Hogan said, he got the brilliant idea to share the practice with his students. Before the pandemic, he practiced regularly with his freshmen.

“It’s a way to actually experience something Taoist,” he explained.

Clio Quilter-Vagts ’21 said she’ll never forget when he started getting her freshman year Global History class out of their seats to follow along with a tai chi video. Though it was difficult to find space for the activity in the cramped classroom, Clio said, she remembers the activity fondly and always left feeling happier than she had gone in.

Mr. Hogan also taught Clio the importance of being curious and asking questions, she said.

“He makes a point of embracing questions of all kinds and celebrating curiosity. I love that he never shuts anyone down or cuts anyone off, but rather deeply engages with us,” Clio said. “His approach to teaching is so refreshing and truly made me love learning. His kindness, curiosity, and passion for life and learning have set me on the path that I am following today.”