Siegel to go down in school history books 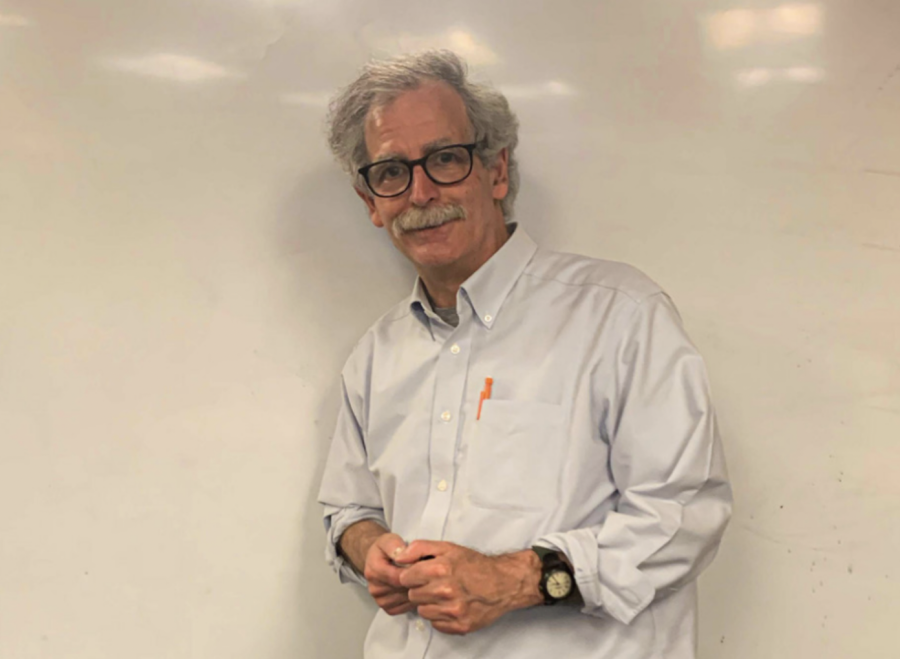 During the job interview of Upper School History and Social Sciences Teacher Tom Siegel P’17, then History Department Head Leigh Hogan said, he could see that Mr. Siegel just loved the experience of sitting in an office with a colleague and talking about history.

“I wasn’t in that office,” Mr. Hogan said, “but I know that one of his favorite parts of the job was having conversations about what we were teaching.”

“That office” would be Room 172, a space renowned in the history department for the jokes, lessons, and knowledge shared by the history faculty working within it. In September, for the first time since arriving at the school in 2005, Mr. Siegel will not reign over 172, as this month marks his retirement from teaching.

History and Social Sciences Department Head Susan Glazer points to Room 172, which she shared with Mr. Siegel from 2015 to 2018, as a place of collegial harmony with Mr. Siegel at its center.

“I loved when students would come into the office, and I’d be talking to them about their [research] project, and I’d just be like, ‘Hey, Tom! If someone’s interested in this thing, what’s something they could do?’ And he would rattle off 10 topics or an angle at something I hadn’t thought about,” Ms. Glazer said. “I learned a lot from him just asking questions, talking about documents, and doing nerdy history stuff.”

Dr. Glazer said she benefited from Mr. Siegel’s impressive knowledge of colonial history—not only the facts, but his understanding of themes that shaped the early days of America. In fact, Mr. Siegel wrote his doctoral thesis on 18th century American colonial history at Harvard. Following his PhD work and before arriving at the school, Mr. Siegel spent three years as a lecturer at Harvard and 12 years working with Boston-area nonprofits such as The Boston Foundation and, The Associated Grantmakers.

A favorite part of teaching has been the annual opportunity to revise his curriculum, Mr. Siegel said.

“It takes a lot of work to make sure that you’re teaching fresh material every year, and that you’re teach[ing] it to every student,” he said. “I have to work really hard to learn the material so well so that I [create] an environment where [any student] can thrive.”

With US in the Modern World, a two-year class offered in the middle grades from 2007 to 2017, Mr. Siegel, working with former History and Social Sciences Department Head Gustavo Carrera, rethought the way US history was taught, putting together both an American history and world history course for students.

“The theory of that course was US in the Modern World, not US and the Modern World,” he said. “I started with the Mongols and the black death, and we didn’t get to the American colonies until the winter, until we were ready to see the colonies and America as part of Europe’s slow movement to being dominant compared with China, India, Africa, and the Middle East.”

Deven Catalano ’15 said studying with Mr. Siegel during that course was sometimes difficult but always fruitful.

“Mr. Siegel was demanding,” Deven said. “He had high expectations, but he never left you feeling unsupported, and he delighted in seeing his students achieve a breakthrough in their knowledge. We shared many laughs and many ‘Aha!’ moments during his office hours, and for those I am deeply grateful.”

In 2012, alongside Mr. Carrera and former History and Social Sciences Teacher Susannah Walker, Mr. Siegel helped develop the school’s own US history textbook, which the department still uses.

“Writing the narrative [allowed me] to understand how to make [American history] a bigger story than just one damn thing happen[ing] after another in the US,” Mr. Siegel said. “I’ve thought that my goal as a teacher is taking students who are not used to studying abstractions and easing them into understanding abstractions.”

Zach Lang ’19, who took US History and the Senior Research Seminar (Honors) with Mr. Siegel, said the courses helped him appreciate history in a new way. Now a history major in college, Zach identified Mr. Siegel’s method of “making green,” or recalling past information to understand a newly introduced topic or event, as impactful teaching.

“He really encouraged engaging with the interconnections between historical events and understanding how those events bear on what we know today,” Zach said. “Being able to see that historical trajectory was really helpful, and he always made sure to emphasize that.”

In addition to teaching history courses ranging from Medieval History to Politics in the Global Age during his tenure, Mr. Siegel has advised students for 15 of his 16 years at the school.

Menelik Epee-Bounya ’17, a former student and advisee, said they had a very special connection.

“He always believed in me and helped me grow,” Menelik said. “I think I grew a lot with him; he made me much more confident. As an underclassman I was more reserved, and he understood that, but he also knew that I had more potential.”

One of just two in Mr. Siegel’s current advisory, Ilsa Weinert ’21 also spoke to the “ton of self-confidence” Mr. Siegel has encouraged in her and said their group’s regular meetings have felt special, both this spring and throughout the pandemic.

“He had this refrain of checking in to see if we had been eating, sleeping, and exercising, basically just making sure we were staying sane,” Ilsa said. “It also felt like we were looking out for him, too. We were all looking out for each other. I’ll really miss him, and I’m so glad that I was lucky enough to have him as part of my high school experience.”

During his retirement, Mr. Siegel said, he plans to work with the Thompson Island Foundation and enjoy a slightly more relaxed schedule.