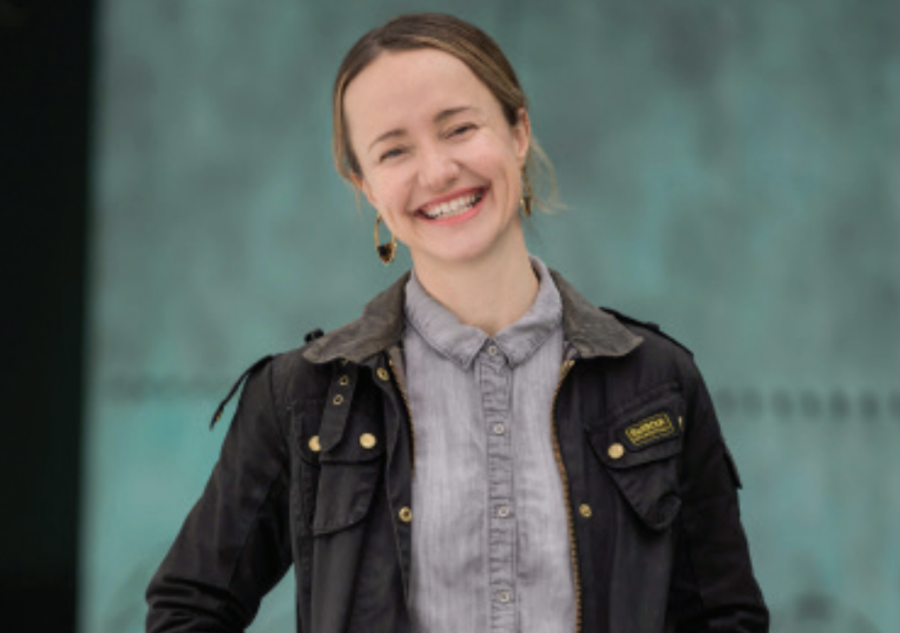 Past 11 p.m. on the night before a debate tournament, Upper School (US) English Teacher and Speech and Debate Coach Sarah Getchell guided several members of the speech and debate team on a Zoom call to hone their arguments and prepared speeches, co-captain Julia Shephard ’22 recalled.

“You don’t usually have that type of relationship with a teacher who is willing to stay up even later than that,” Julia said. “We have a really great team atmosphere, and I think a lot of that is due to the unconventional way she runs things.”

When Ms. Getchell arrived at the school to teach English in 2015, she also took over the speech and debate team, newly rekindled at the time of her arrival, and brought it along to many victories. It became the first American school to win the International Independent Schools Public Speaking Competition (IISPSC) this year, Co-Captain Alexi Melki ’21 became the first American to take first place as an individual competitor at IISPSC this year, and several debaters qualified for World Individual Debating and Public Speaking Championships (WIDPSC) to represent the American team.

The team wins are merely extensions of the process Ms. Getchell has encouraged, Julia said.

“It’s not all about taking x, y, z steps to get to some sort of debate victory. It’s also about engaging with people around you and seeking feedback in different ways. The goal is to become really good at thinking and speaking, and the side effect of that: you win debate tournaments.”

Under her tutelage, the debate team has become a more collaborative environment, Ms. Getchell said.

“We have moved toward being less combative in our approach to debate,” she said. “Our culture has evolved to be less cutthroat but still competitive.”

The debate team now nurtures debaters of all expertise with varying goals, she added.

“We try to focus on the whole range: from brand new debaters who want to get more comfortable with public speaking all the way through to people who want to win [WIDPSC],” Ms. Getchell said. “We want to have fun and help people on the team to achieve a huge range of goals.”

In the final stages of her interviewing process, former Speech and Debate Co-Captain Michael Goldfine ’16 was among a group of only students to interview Ms. Getchell for the role of the speech and debate team coach. Having gone through three coaches in two years, the debate team was falling apart, Michael said.

“I remember everybody in the room really liked her immediately,” Michael said. “She’s really quick to connect with students, and she talks to students like they’re adults, like she is interested in hearing about them.”

Elise Hawkins ’21—another team co-captain, who had Ms. Getchell as an English teacher freshman year and who his year, took Ms. Getchell’s senior elective, Law, Literature, and Social Justice—said Ms. Getchell has emphasized the importance of connection.

“On the first day of her class, you’re not delving right into the coursework,” Elise said. “There is a time of getting to know each other. It makes what you end up learning a lot more valuable because you trust what the other person is saying.”

Avik Sarkar ’19, who took Law, Literature, and Social Justice during the 2018-19 school year, said Ms. Getchell’s advice to think critically about controversial topics has influenced his studies at Yale University, where he now majors in women’s, gender, and sexuality studies with a focus on literary and critical theory.

“Ms. Getchell taught me to look for the spaces that are intellectually challenging, the conversations that will stir the pot, because those will be the most interesting and exciting places to be.”

Aurash Vatan ’19, co-captain of speech and debate during his junior and senior years, said he has considered going to law school because of how Ms. Getchell presented tort law in a mini course he took during his Senior Spring Project.

“The reason it was so exciting for me is because it was the rigor of mathematical type thinking and logic in an arena that is not math,” Aurash said. “That kind of thinking really appeals to me. She made sure that we were thinking in a mathematical and logical way, and she stressed the concrete stakes of the problems and hypotheticals we were talking about.”

“A lot of people would say, ‘Well, I have all these sunk costs,’” Mr. Walker said. “Ms. Getchell decided to go after what she was passionate about even if it meant completely changing her trajectory.”

English Department Head Ariel Duddy, who began teaching at the school at the same time as Ms. Getchell and shared an office with her for six years, said she has benefited from Ms. Getchell’s brand of critical thinking.

“She’ll raise questions about school and the world, and I’m like, ‘You’re totally right, but I hadn’t thought about it that way before.’ I feel like she has pushed me to be a bit more critical about the why of what we do and how we exist in the world.”

This month marks Ms. Getchell’s last at the school, as she and her family are planning a move to Portland, Maine, where she has accepted a teaching position at the Waynflete School.