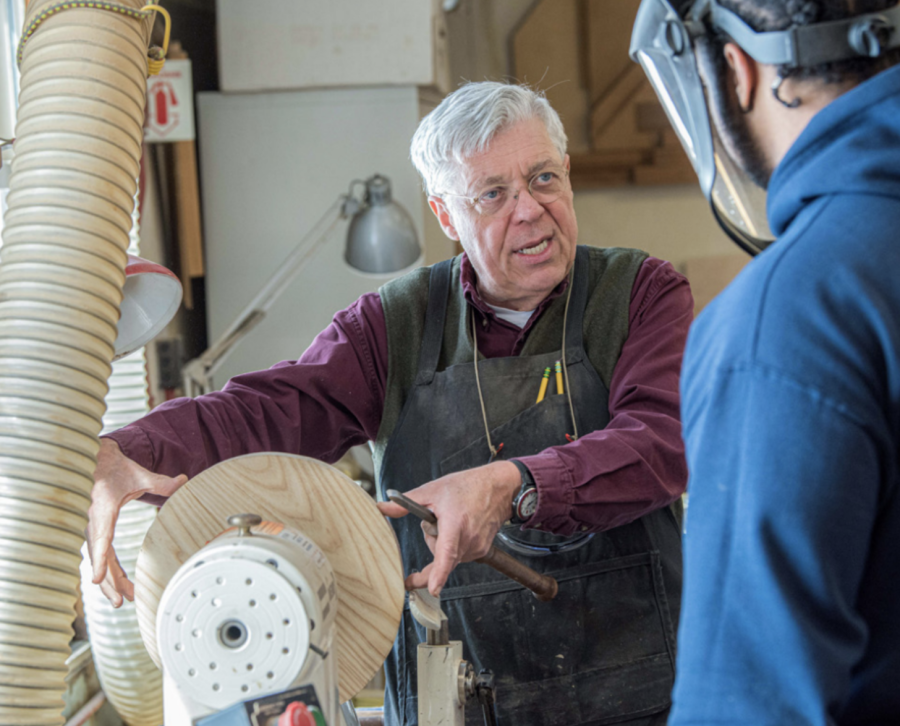 Away from the bustling hive of the main Upper School (US) building sits the woodshed, the oldest continually used woodshed in the nation. There, one can find US Woodworking Teacher Paul Ruhlmann among buzzing power tools and towering piles of wood. Every year, students from all four grades have entered this world of sawdust and—every Friday—popcorn, and with Mr. Ruhlmann’s help, they have learned about creation and problem solving.

“Woodworking can be something much more than making things. It can be about just challenging yourself, and struggling with finding solutions to what appears to be a really, really complex problem at the beginning, and finding some success and satisfaction and pride in what you make,” Mr. Ruhlmann said.

Mr. Ruhlmann is retiring after 43 years at the school, a career that began after false starts pursuing marine biology and clinical psychology and a life-changing encounter with woodworker Jon Brooks, whom he met at a Christmas party in 1976. When Mr. Brooks later invited Mr. Ruhlmann to his house to see his artwork, Mr. Ruhlmann said, he realized what his next step should be.

“It was like Saint Paul on the trip to Damascus,” he said. “He had a religious experience, and it was like that. I can say exactly the moment in time that I decided to become a woodworker.”

Three months learning from Mr. Brooks was all Mr. Ruhlmann needed to decide woodworking was what he wanted to do forever, he said, and he began displaying bowls and small carvings for purchase at The Society of Arts and Crafts in Boston until Former Lower School Arts Teacher Peggy Porter saw his work and asked him to be the school’s woodworking teacher. And so Mr. Ruhlmann brought his philosophy of taking risks and giving your all to the school and to his students, he said.

During his decades at the school, Mr. Ruhlmann has crafted many different unique projects for students and adapted the curriculum to suit the students. He used to teach chip carving, a technique using a chisel to texture wood by removing small chips from its surface, until he realized the tremendous amount of patience required and the students’ desire to experience a quicker payoff, he said. Over the years these new projects have ranged from sculpture related to sustainability, self, and even imagined alien life.

Part of the magic of woodworking, Howie Brown ’22 said, is Mr. Ruhlmann’s willingness to make ideas come to life.

“Mr. Ruhlmann is kind of a genius when it comes to woodworking,” Howie said. “You could say the most outrageous thing in the world to him, and he’d be like, ‘OK, we can do that!’”

Mr. Ruhlmann’s interactions with students also inspired him to design a new tool. While mentoring students making rustic furniture, one of his favorite projects, he said, he saw that students often struggled at carving branches into dowels and made them end in points instead. To help them out, Mr. Ruhlmann invented a mechanism that attaches to a drill and carves the shape for them. The tool became a prototype that he then got patented. Soon afterward, Lee Valley Tools began manufacturing them as Veritas Tenon Cutters; Mr. Ruhlmann receives royalties for the tools. Later, his love of rustic furniture led him to write an article about it for Fine Woodworking, for which photographers visited the woodworking studio so it could be featured in the article and in an instructional video, “Making Rustic Furniture.”

Math and Computer Science Teacher Mark Fidler said he admired Mr. Ruhlmann’s ability to make woodworking an art, not only a craft.

“He’s a master at what he does with work, but he has a love of it and just a total passion for it,” he said. “A skill and passion combined is exactly what you want in an art teacher.”

Mr. Ruhlmann appreciates all the flexibility and freedom that the school has given him in regards to woodworking and his curriculum, he said.

“I really appreciate that the school has faith in my talent and that they offer me a tremendous amount of latitude,” he said. “I teach what I feel is important and valuable to the students.”

Working with current students and reconnecting with graduates is another treasured part of his career, Mr. Ruhlmann said.

“I’ve kept in touch with a lot of past students, and those seem to be my fondest memories: when I see people a little bit removed from graduating here, and they just talk about how wonderful it was working here, and they always say they have the same pieces they made many years ago.”

Zark Strasburger ’89, who has been employed full time making furniture, said Mr. Ruhlmann showed him the opportunities possible as an adult.

“There’s a lot of stuff about BB&N that teaches people to be doctors and lawyers and teachers and investment bankers, but what Mr. Ruhlmann does opens up another avenue and says there’s a little more out there,” he said.

In his retirement, Mr. Ruhlmann plans to help his son with his hot sauce business, Craic Sauce, and once it is safe, travel more to places like Ireland. 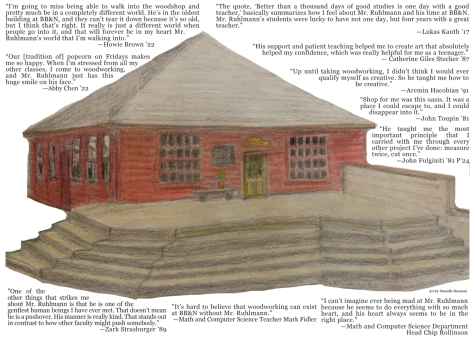