The Academy Award goes to… not the 2021 Oscars 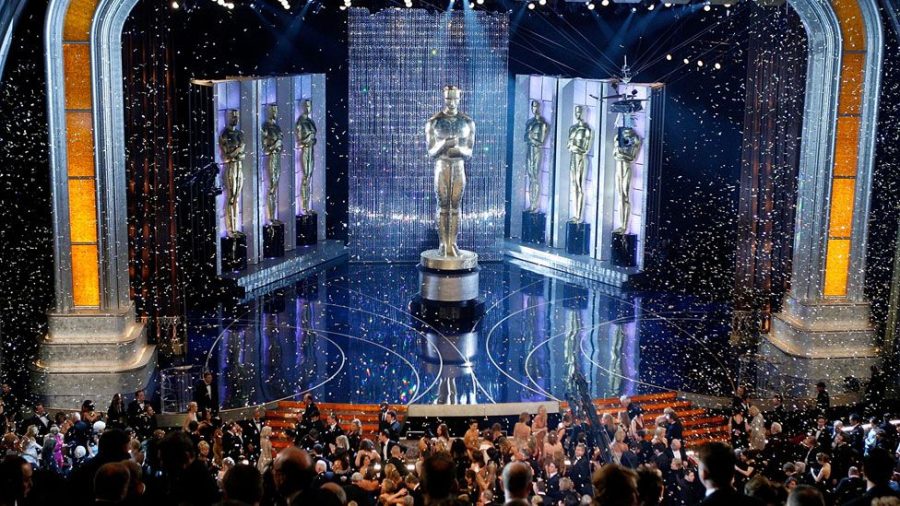 Following last year’s extravagant Oscars, filled with dazzling red-carpet appearances and a groundbreaking win for “Parasite,” film and fashion fanatics were excited to see how The Academy would adapt to 2021’s restrictions. However, without a reliable host to guide viewers through the ceremony’s new look and approach, this esteemed award show, delayed until late April from its usual slot on the calendar two months earlier, felt as though it lost its luster.

The regal elegance of the Oscars devolved into the vibe of an underground jazz club after David Rockwell, this year’s interior designer, decided to steer away from the Oscar’s typical glamorous Hollywood design and start fully from scratch. Mr. Rockwell and his team’s vision for the interior’s new look clashed with the long history of the Oscars. The famous, massive red curtains that framed the large stage were swapped out for blue curtains that engulfed a small semi-circle stage. Instead of rows of cushioned movie theater seats, booths confined the nominees to their own cliques, and although the booths created a more COVID-friendly layout, the element of celebrity banter and sense of community were lost.

In an interview with Town & Country Magazine, Mr. Rockwell said he hoped to emphasize the nominees and their artwork by choosing a smaller venue that created a more intimate environment with fewer distractions. This, however, robbed the viewer from laughing along with their favorite A-list celebrities. The viewer felt like a third wheel, and the date was overrated.

In the same interview, Mr. Rockwell said he tried to “invite the TV audience into a chance to celebrate this very creative, vital world of telling stories.” But the show itself left me wondering, “Did my invitation get lost in the mail?” As a filmmaker, I do acknowledge his effort to highlight the craft by focusing on the nominees through his more intimate set design, especially since Hollywood’s highly business-driven nature can sometimes overshadow the art and creative work done by those involved in the industry. That said, this award show itself is a part of the larger entertainment business, and they’re here to entertain us, the viewers.

The elements of the ceremony that are supposed to scream “Hollywood glam!” were also painfully absent in this year’s Oscars. For example, with a limited number of actors on the red carpet, what normally builds excitement for the show provided little lead-in power and fashion gossip. In addition, the award show’s the most-anticipated award, Best Picture, wasn’t even the climax. With the final award slot instead going to Best Actor—awarded to Anthony Hopkins instead of the Golden Globe winner and recently departed Chadwick Boseman, at that—the end of the show felt incomplete. For years, the awards would end with the camera fading away from the final scene of a team celebrating its collective win of Best Picture. This shot evoked a sense of community; we could feel their excitement, smiles, and hugs through the screen. Losing that was disappointing.

Over the years, I have religiously watched the Oscars as the actors stumble through their acceptance speeches until the symphony cuts them off (don’t worry—I have plenty of time to finish this review before the symphony sneaks in). And for 93 years, the Oscars have hooked viewers by giving them V.I.P. access to favorite actors playing the role of themselves. We finally got to see the real, seal-clapping Nicole Kidman rather than her Big Little Lies character. We got to see Leo DiCaprio talk about climate change rather than Jack Dawson on a sinking ship or the over-the-top Jay Gatsby. As a viewer in 2021, I missed watching the meme-able interactions, like Ellen DeGeneres’ selfie that included some of our favorite celebrities all in one picture.

For decades, The Oscars have occupied three hours of ABC’s Sunday lineup as a televised event reaching more than just movie lovers. After a year of isolation, we viewers were hungry to become immersed in the celebrity world, but were ultimately excluded. 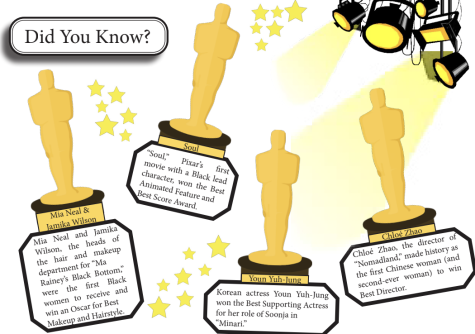