Live music makes a comeback in the courtyard 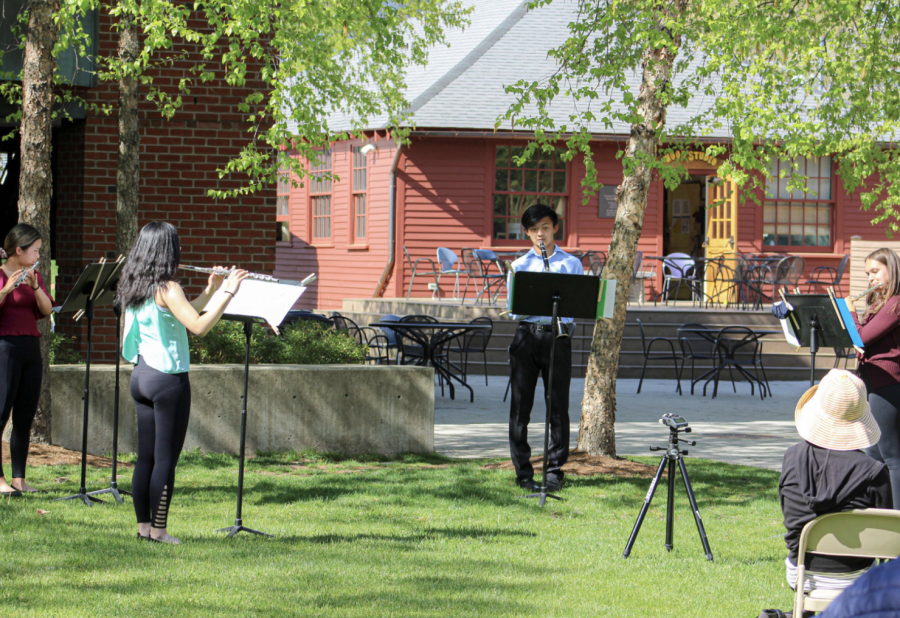 Finally congregated in the courtyard under sunshine— rather than in a grid of virtual seats—performers, students, and faculty enjoyed chamber and jazz music on May 13 and May 14, respectively, for the first in-person concerts those groups have hosted in over a year.

Upper School (US) Chamber and Orchestra Teacher Elliot Cless ’02 noted how the performance days happened to be some of the nicest of the year, leaving the 50 socially distanced audience members hoping for more.

“I keep hearing, ‘Will you have another courtyard concert next year?’ and my answer is yes, as long as the weather is just as beautiful. But if not, it will be nice to retreat into one of the music rooms as a backup!” Dr. Cless said.

Students prepared for the musical outings for months, managing constantly changing practice schedules and restrictions. Practices for the four jazz ensembles went from all-remote to outdoors in tents to indoors without wind players to indoors with wind players using masks and instrument covers. Despite these changing conditions, chamber’s instrumentalists practiced for 90 minutes a week—40 minutes more than in years past.

Chamber featured two string quartets, one string quintet, a piano-harp duo, a trio of pianists, and a quartet of woodwinds.

Jayden, a cellist, said the acoustics outdoors were difficult yet still a huge improvement over online recitals.

“I enjoyed playing outdoors,” he said, “although at times it was hard to hear my fellow musicians in my chamber ensemble and effectively project the music to the audience on unamplified instruments.”

Viola player Abigail Rabieh ’21 said the chamber program has provided comfort this year by giving students a place to collaborate in a volatile time.

“Even though there were some differences [between this year and last], the main goal of playing chamber music—working together, as one team, to figure out how to make music sound beautiful—stayed the same,” she said. “It was one of the few spaces this year where I felt connected to my classmates and friends, and we’ve been able to accomplish some special things.”

Abigail, who played String Quartet in F Major by Maurice Ravel alongside Catherine Bertolini, Sam Rabieh, and Sam Whitney (all ’21), said she was proud of the work they had done.

Jazz musicians performed in four groups: an 11-person ninth grade ensemble; two eight-person ensembles consisting of sophomores and seniors; and a six-person, all- junior ensemble. Each played two to four pieces, including “Red Clay” by Freddie Hubbard, “Footprints” by Wayne Shorter, “Stars over Marrakesh” by Elmo Hope, and “The Cape Verdean Blues” by Horace Silver. The four jazz ensembles combined for a final performance of Sun Ra’s “Outer Spaceways Incorporated,” featuring 18 wind players, guest vocals from Dahlia Roberts ’24, and an all-seniors rhythm section—the largest jazz ensemble US Jazz Teacher Pandelis Karayorgis has ever put together and a moment he identified as among the most special this year. The chart began with collective improvisation and segued into what Mr. Karayorgis described as a musical peroration to end a year of COVID.

“Sun Ra’s escapist lyrics about joining a space alliance made a great analogy to the desire to leave all of our woes behind and move forward,” he said.

At the end of the concert, senior performers delivered remarks about their time in the group, which Saxophonist Thaddeus Foote ’22 said he appreciated.

“It was a great to end the concert on a high note and hear their reflections about their experience as it drew to a close,” he said.

To some, the concert invited reflection for more than just the seniors. Bassist Daniel Wang ’22 said the performance revived a sense of past regularity and encouraging emotions.

“Hearing all four jazz groups’ pieces echo throughout the courtyard definitely brought me the same old excitement and a new hope,” he said. “The optimist inside me says this is a sign that things are turning for the better, for our return to normalcy.”