Collaboration stars in ‘Mother Courage and Her Children’ 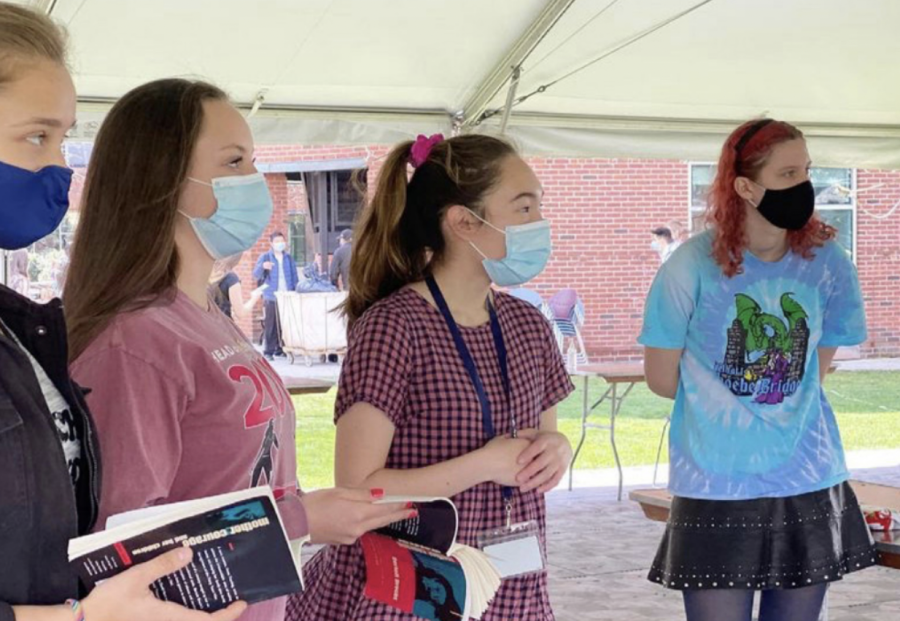 In its first official use in over a year, the Lindberg- Serries Theater housed the Senior Show, Bertolt Brecht’s “Mother Courage and Her Children,” for 12 seniors’ final Upper School (US) production.

Director Ilsa Weinert, producer Eli Jensen, and stage manager Julian Parker-Sartori (all ’21) have been leading the cast of nine four days a week since the start of April as the class prepares to perform in the live location Ilsa has called “essential.”

“One of the best parts of theater is seeing the audience file through the door and hearing that quiet rumbling,” Ilsa said. “An actor can also tell if the audience enjoyed the show, and there comes a sense of pride with being able to see the audience’s reactions, and I wanted everyone to experience that.”

The play follows the titular character and her three adopted children through the 17th century as they try to survive the Thirty Years’ War, which occurred in Central Europe from 1618 to 1648 and stemmed from conflict within the Habsburg dynasty for European control.

At the start of the play, the family directly profits from the war as they sell goods to traveling soldiers, but Mother Courage later finds herself conflicted as she continues to profit from the war that is gradually killing her children.

When Upper School (US) Theater Director Ross MacDonald shared play ideas in February, Ilsa and Eli both felt “Mother Courage” was the best choice: its themes felt relevant, Ilsa said, and it was also the first production former US Theater Director Mark Lindberg, who worked closely with Ilsa during her time as stage manager, put on.

“Soldiers in the Thirty Years’ War and in ‘Mother Courage’ were mercenaries, meaning soldiers were in it for the money more than for their country,” Ilsa said. “This is in stark contrast to the strong and passionate views about nationalism and serving in the military today.”

The all-senior cast has both intimidated and encouraged her, Ilsa said.

“It has been an incredibly new experience—and terrifying,” Ilsa said. “I’ve mostly interacted with theater as a stage manager, not an actor, so initially I felt some of the cast was more qualified to be director than I was, and it was hard to know if I was saying the right thing or when to take charge. However, I’ve gotten a lot more comfortable because all of the cast are seniors.”

Eli said he felt similarly and called his lack of experience incredibly stressful.

“There are so many things I need to think about that I didn’t have to when I was an actor,” he said. “Almost all the logistics run through me, and along with working with the cast, Ilsa and I also talk with [US Theater Designer Eugene Warner] and [US Costume Designer Louise Brown] on the set, props, and costumes, among other things. It’s a lot to keep track of.”

But watching the cast unite has been a bright spot, Eli said, especially since he wasn’t sure how such a big group of classmates would gel.

“Everyone has just come together so well, and we all enjoy rehearsals,” Eli said. “This is one of the last times some of us will see each other, and you can see that everyone wants to make the most of it.”

Marie Quintanar ’21, who plays Mother Courage, said she has appreciated the peer relationship between the cast and directors.

“Since the directors know the cast, they’ve taken a looser directing approach where they encourage us to explore our characters and take them in the direction we want to, something that I’m not used to,” she said.

Marie said she and Isla bounced ideas off each other.

“Once at midnight, we were both awake, and I suddenly had an idea where I would avoid the presence of some soldiers in the scene,” Marie said. “The next day we tried it, and it was great.”

Nanako, a new actor who plays a mute child of Mother Courage, said she knew trying theater would challenge her and be a great learning experience.

“At first I was kind of insulted that I didn’t have lines because I thought that meant I was a bad actor, but I found that I’ve really had to work on my body language, interactions with others, and expressing myself without lines, which I think can definitely be harder for a new actor,” Nanako said. “Especially when the stage directions tell me to make certain noises, it can be really embarrassing hearing the sounds that I make, but other than that it has been great.”

The senior show was performed live in the Lindberg-Serries Theater on May 26 at 4 p.m. and May 27 at 5 p.m., after this paper went to press. Pandemic protocols meant there was limited audience space, as spectators sat in the back half of the theater 6 feet apart.