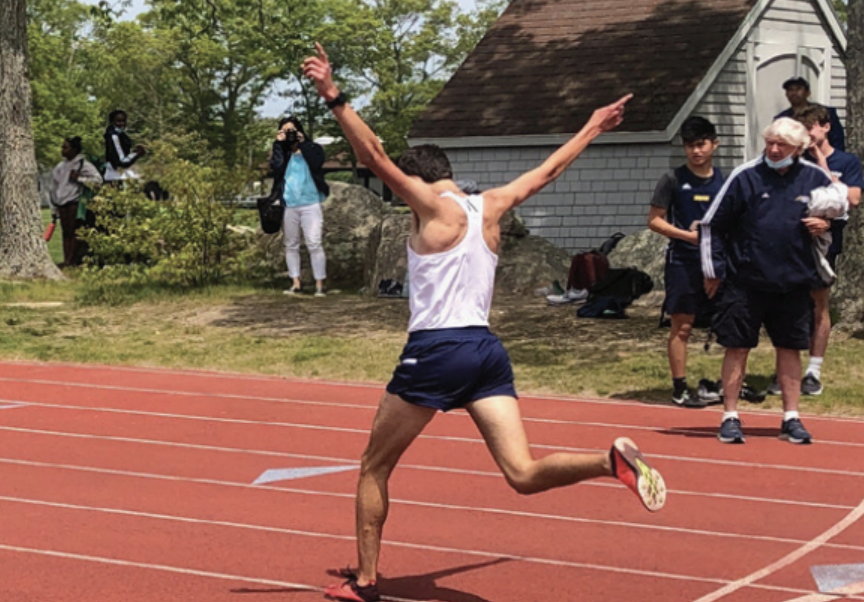 After each meet this season, Track and Field Coach Charlie O’Rourke sent out “Max Effort” emails, detailing the accomplishments of those who had worked hard, trained well, or beaten personal records. Among those, he highlighted Peter Lichtenberger ’23 and Laura Cox ’22 breaking their personal pole-vaulting records at 11- and 9-feet, respectively, with Peter’s breaking the school record; Sam Rabieh ’21 breaking the overall school record and the Independent School League record for the year in the 3000-meter run; Hannah Bernstein ’24 winning the 800-meter run at Thayer Academy on May 1 while her teammates cheered her on; and Nick Matosic ’23 buying his own shotput and discus to practice at home—a first for Coach O’Rourke— which improved his shotput by 2 feet.

While the pandemic certainly disrupted everyone’s lives, everyone on the team still found time to train, compete, and give max effort, Coach O’Rourke said.

The ISL approved competitions but not scoring, so the team did not log a record, and Coach O’Rourke said he modified his goals slightly.

“[My hope has been] for everyone to have a fun experience and stay healthy,” he said.

After last year’s lost season, Co-Captain Alex Wu ’21 said, he was excited to be back on the track.

“I’m so glad that we finally got to compete this year, and I’ve seen everyone improve over the past couple of weeks,” Alex said.

A spate of injuries and inconsistent access to the normal practice track at Danehy Hill posed challenges, but Belmont Hill and Watertown High School lent their tracks regularly, and on days when those were occupied, the runners made do with grass fields.

Co-Captain Samirah Moody ’21 said she was proud of the team for overcoming the practice situation and for being consistently dedicated and excited. This spring, Samirah broke the school record in the 100-meter, 200-meter, and 400-meter events, and at the North Carolina A&T Invitational Twilight Classic in Greensboro on May 16 with her club, she broke two Massachusetts records, running 100 meters in 11.6 seconds and 200 meters in 24.02.