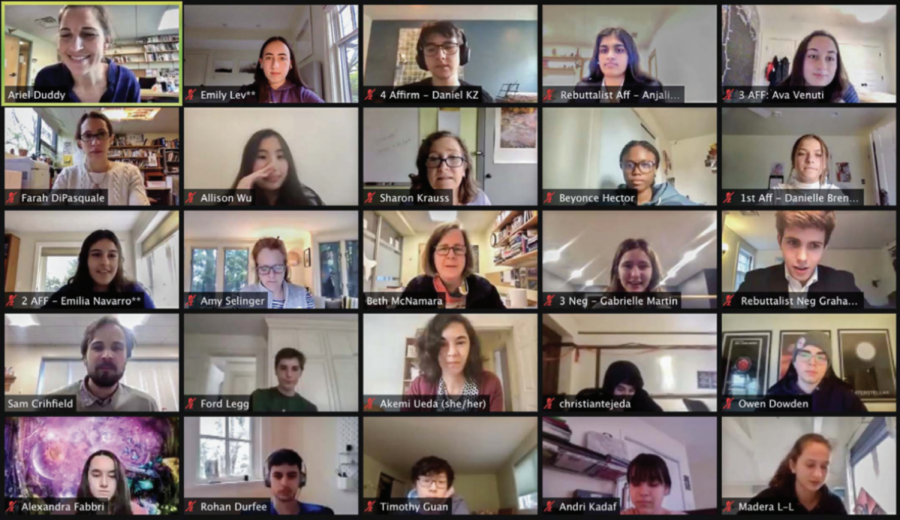 The sophomore class gathered virtually on April 29 for this year’s All-Star Debate, as nine of their peers argued whether colleges should accept SAT and ACT scores in the admissions process—a topic the Upper School (US) English Department chose because of its richness and relevance to high school students, Department Head Ariel Duddy said.

This year’s debate featured five sophomores on the affirmative side and four on the negative, all of whom excelled in the gradewide round of debates. All-Stars received their teams and the resolution two weeks before the debate and met during free blocks and after school to prepare arguments.

“The biggest takeaway—and I know my fellow English teachers would agree—is the impressive effort and dedication of the All-Stars,” Ms. Duddy said. “While it is an honor to be selected by classmates to be an All-Star, we also understand that these students must complete the extra work of scheduling team meetings, researching a topic, and writing speeches—no easy task.”

Though she missed the energy of the entire grade gathering to watch the debate in the theater, she added, she was just as impressed with the debaters’ work.

“I especially enjoyed hearing some All-Stars’ pithy turns of phrase when arguing their side,” she said, citing when Danielle Brennan ’23 characterized financially motivated standardized testing organizations as “wolves in sheep’s clothing” and when Gabi Martin ’23 called personality—which, in the absence of standardized testing, could wrongly skew the selection process—as “easy to fake and hard to judge.”

Among the affirmative side’s main points were the test’s inability to represent the intelligence and potential of students accurately and the relative lack of access to tutoring and preparation afforded some kinds of college applicants.

The negative side argued that keeping the SAT and ACT is essential for creating a standard metric of comparison and that eliminating the SAT and ACT would end up putting lower-income students at a disadvantage in the admission process.

Graham Bateman ’23, the rebuttalist for side negative, said the debate went well and hopefully prompted others to think more deeply about their views, even if it didn’t change his own.

“Obviously, this is a hugely controversial topic, and both sides brought up some very sensitive issues,” Graham said.

“I think both sides would have benefited from bringing in more statistics and more nuanced analysis on the root cause of disparities in SAT scores across different economic backgrounds.”

Danielle Brennan ’23, who opened the debate for side affirmative, said she enjoyed the opportunity to hold multiple perspectives and argue for a side she didn’t personally agree with since she felt standardized tests probably helped her gain admission to BB&N.

“I know the value of standardized testing, and I’ve planned on using that, for as long as I can remember, to get into college,” Danielle said. “My background and my experience led me to side more with the team that I was arguing against.”

Still, her experience with the topic helped connect her to the actual debate, she said.

“I learned so much about the process and the inequities that I had kind of heard about but never really went in depth with, and I think it’s super cool that we had a platform to talk about that and have the whole grade there to hear about it,” Danielle said.

After deliberating, the three judges—2020 Jacobs Prize Winner Julia Shephard ’22, Director of College Counseling Amy Selinger, and US History and Social Sciences Teacher Farah DiPasquale—chose side negative as the winner.

“We thought that on all sides there was some really impressive teamwork, and refutation, and delivery, and different points, so well done to everyone,” Julia told the Zoom participants.

In her deliberations, Ms. Selinger said, she worried about the lack of understanding from both sides on some points, specifically the assumption that there is a direct correlation between socioeconomic status and standardized test scores.

“They didn’t have enough time to delve into the topics enough to understand the nuance,” she said. “It was generalized by most people in the debate, and I hope this doesn’t cause people to draw conclusions and take it as fact when it only represents one drop in the bucket of standardized testing.”

Ms. Selinger recognized that addressing these topics is a difficult task, however, especially with limited time, and she said she was impressed with the debaters’ courage in public speaking and eloquence in other parts of the debate.

“Of course they didn’t reflect the nuance of the actual landscape; there are people who spend their whole careers studying this.”

After the debate, the English department awarded this year’s Jacobs Prize to Gabi Martin ’23, the third speaker for side negative. For more community thoughts on the debate’s resolution, see “SAT and ACT: flawed or functional?”