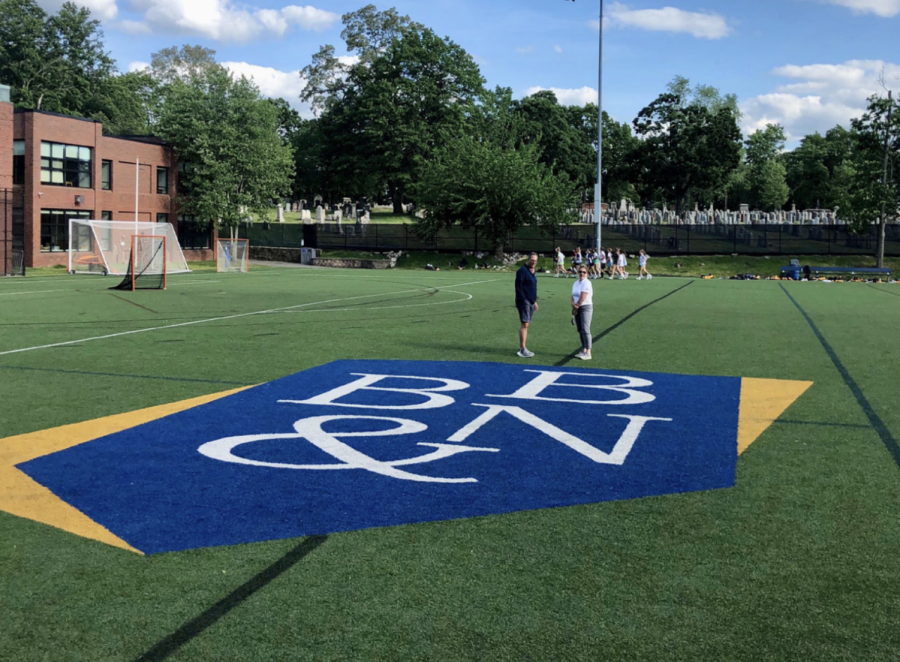 When the school builds two new synthetic turf fields on Grove Street in March 2022, many Watertown residents will be unhappy with it, according to a petition launched in February and an April letter sent to Head of School Jen Price, citing environmental and safety concerns.

The plan for fields on Grove Street comes after a two-year process of raising money and negotiating the purchase of the property from the town of Watertown and from Mount Auburn Cemetery, a move that gives the Upper School (US) space for an athletic complex only four minutes away by bus (see “Future school athletes can get home in time for dinner,” Vol. 49, No. 7).

The petition, open to anyone anywhere, has since gathered 760 signatures.

On April 15, the school hosted a public webinar to address the petition’s concerns and showcase plans for the athletic complex.

The turfs would save water since they are self-sustaining and have a water runoff system to surrounding greenery, the school said, citing overall energy savings corroborated in a 2010 report by the Journal of Applied Meteorology and Climatology, which suggested artificial turf was a “win-win” for urban landscaping.

The school also showed slides that footnoted a 2019 Environmental Protection Agency report characterizing tire crumb rubber as rarely harmful in good-quality turf. “While chemicals are present in the recycled tire crumb rubber,” the report reads, “exposure appears to be limited based on what is released into air or biological fluids.”

At the webinar, Megan Buczynski, a civil engineer from Activas, the organization working with the school on sustainability and safety concerns, addressed personal and environmental health risks. She said the school plans to use encapsulated crumb rubber that employs a light green coating to lower the amount of heat the otherwise black infill would entrap and to block harmful chemicals from escaping. Regarding the turf’s potential heat island effect, Ms. Buczynski said, “With our open- concept plan, everything on this site is designed to let airflow move through easily, which considerably cools down the turf and the players.”

In response to the meeting, Watertown residents revised their petition on April 23 with a new headline, “BB&N handed us fiction,” and penned an April 29 letter to Cambridge residents published in Cambridge Day. The letter detailed some residents’ continued concerns, among them how the school would ultimately dispose of the turf and how it could conscience “ignoring science” by raising temperatures in and around Filippello Park.

Decrying the school’s absence of a plan for disposal of the turf after its estimated 10-year lifespan, the letter said, “When it’s time to say goodbye [to the turf], it ends up in a landfill in somebody else’s community.” It went on to raise concerns about “bad process,” asserting that the town of Watertown had agreed to the partnership without knowing the “green” in green space would only describe its color.

“This is not what we would call principled engagement,” residents wrote in the letter.

Dr. Price, who has been involved in almost every aspect of the project, said she believes putting two turf fields on Grove Street is a great example of principled engagement.

“We could build a turf field anywhere, but we’re partnering with Watertown so that the kids of Watertown can use it when the school is not, and that is totally my idea of principled engagement,” she said. “If we chose grass, Watertown wouldn’t be able to use it when we’re not since it would need to be maintained. But now we have fields for Watertown residents and youth teams to enjoy along with us.”

Chief Financial and Operating Officer Tara Gohlmann, who has spearheaded the project and said she sees both the upside and downside of turf, said in the end turf is the best option for the school.

“A grass field would not represent a viable use for the fields because of the hours of play and the amount of water and maintenance that would be required,” Dr. Gohlmann said. “Overused grass fields can also raise some safety concerns and potential for injuries to our athletes.”

“These turf fields will allow us to rest the grass fields we have on the main campus so that they are more playable,” she added.

She also noted that the area flagged for the turf is now predominantly a paved parking lot and a dirt site yard, so the proposed project will greatly increase the landscaping there, including a variety of new local plant life.

“BB&N and Watertown will likely be using the fields back-to-back most nights, and turf has a high consistency,” he said. “On a day where we get rain or snow, it’s close to impossible to play on a grass field, but on turf you can plow the fields, which allows students to still practice and play games.”

Eric Bookwalter ’23, who plays soccer in and outside of school, said he appreciated the consistency and robustness of turf over grass.

“I know turf will heat up quicker and eventually have to be disposed of,” he said, “but the lower maintenance along with the constant use the turf will receive makes it the best option.”

US Science Teacher and Varsity Football Head Coach Mike Willey said turf is preferable to grass, which is easily damaged and a lot of work for the school grounds crew to maintain.

“When you have multiple teams practicing on a grass surface, you’re tearing it up,” Coach Willey said. “It’s an impossible task to keep it pristine with the amount of teams and the usage that we put on it.”

“Turf makes it safer for the athletes,” he added, “especially with contact sports like lacrosse and football, since you have a consistently flat and resilient surface.”

On behalf of the Eco Reps, outgoing co-president Priya Devavaram ’21 said the club understands the draw of turf but thinks the environmental concerns are more important.

“I hope the school can not only make decisions about this particular property that align with our school motto and community values, but also be thinking about the planet,” Priya said. “This is an opportunity to show to our community that our administration acts against climate change and is thinking further down the road.”

Clio Quilter-Vagts ’21, the other outgoing Eco Reps co-president, also addressed the issue as a Watertown resident who lives near the Grove Street property.

“Watertown has a history of being a wasteland,” Clio said, referring to the Arsenal site’s former use as a US Army ordnance hub and materials technology laboratory. “Some residents believe harmful chemicals still linger from past experiments, and we are worried the school will follow this pattern of dumping waste into Watertown.”

Recognizing the school has already decided on turf, Clio said it can still make the right choice in other aspects of the project.

“BB&N can balance out the negative side effects of turf by redesigning the surrounding area to create a strong local ecosystem and setting forth a plan of turf disposal that is not dumping it into a landfill.”

Cynthia Westerman, the school’s design and construction project manager, said she hopes when the turf’s lifespan is over, the school can recycle it. To that end, she said, she contacted Re-Match, a first-of-its-kind turf recycling plant in Denmark that has received significant funding to develop ways to turn synthetic turf into yarn. Re-Match reportedly replied with news of plans to move to North America sometime in the next decade.

“There’s always the option of putting the old turf in farms or horse stables, which is where most repurposed turf goes, but that option is limited in the amount needed, and we’re hoping to recycle this turf to have the best possible impact on the environment,” Ms. Westerman said.

Residents from Watertown continue to campaign against the school’s plan for turf and ask town members to send emails to Dr. Price. Construction is set to begin in March of 2022.