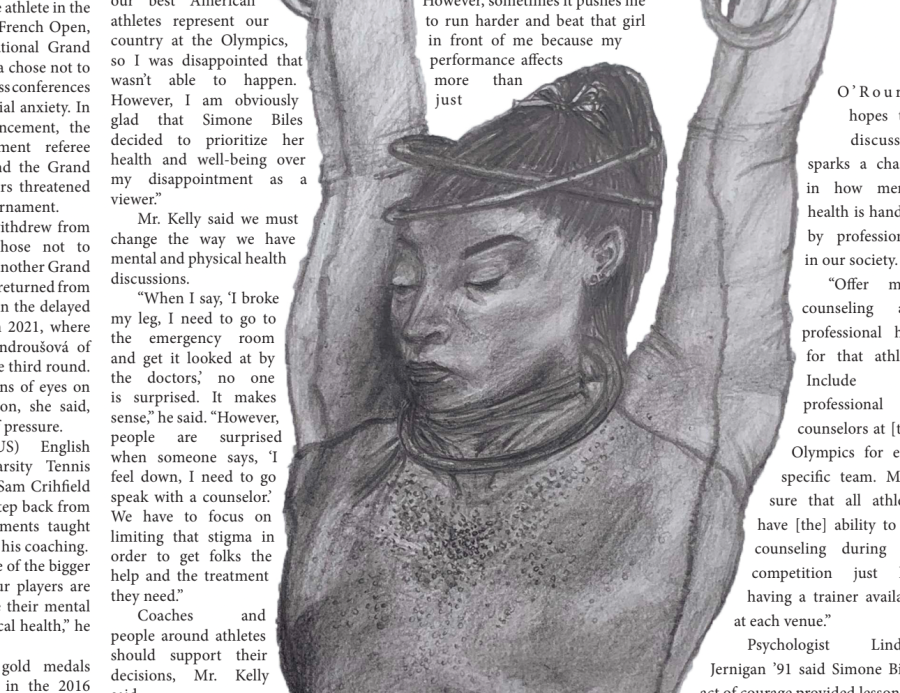 The world is no stranger to athletes pulling out of competitions because of physical injury—this summer, for example, Roger Federer and Rafael Nadal, top-ranked men’s singles tennis players, withdrew from their upcoming tournaments. When Naomi Osaka, ranked second in women’s singles tennis by the Women’s Tennis Association, withdrew from her tournaments, she lit the Olympic torch for a new discussion: mental health.

Representing Japan, Osaka has won four Grand Slam singles titles and is the highest-paid female athlete in the world. During the 2021 French Open, one of the four international Grand Slam tournaments, Osaka chose not to partake in post-match press conferences as they triggered her social anxiety. In response to her announcement, the French Open’s tournament referee fined Osaka $15,000, and the Grand Slam tournament’s leaders threatened to expel her from the tournament.

As a result, Osaka withdrew from the tournament and chose not to compete at Wimbledon, another Grand Slam tournament. Osaka returned from her break to participate in the delayed 2020 Tokyo Olympics in 2021, where she lost to Markéta Vondroušová of the Czech Republic in the third round. The weight of the millions of eyes on her return to competition, she said, resulted in a great deal of pressure.

Upper School (US) English Teacher and Girls’ Varsity Tennis (GVT) Assistant Coach Sam Crihfield said Osaka’s courage to step back from the Grand Slam tournaments taught him a valuable lesson for his coaching.

“We need to be aware of the bigger context of everything our players are going through and value their mental health as highly as physical health,” he said.

Having won four gold medals and one bronze medal in the 2016 Rio Olympics, the world had high expectations for Simone Biles at the Tokyo Olympics. In the vaulting portion of the Women’s Artistic Team All-Around Final, Biles planned on completing an Amanar, a back handspring involving 2.5 twists but instead twisted 1.5 times and stumbled upon landing. Biles had the “twisties,” a gymnastics term referring to the loss of spatial perception, and she withdrew from the rest of the final (See “Physical and mental health must stand on same footing”).

Gymnast Katherine Upton ’24 believes athletes should prioritize their mental health because of the grave implications that could otherwise occur, she said.

“If you’re not in the right headspace, or you lose focus for any reason, there is a really high chance that you could land on your head or neck and get seriously hurt,” she said. “I’m glad that Biles has started a conversation about this and is starting to dismantle the ‘just push through it’ culture that has been the norm in gymnastics for so long.”

“As a viewer, you want to see our best American athletes represent our country at the Olympics, so I was disappointed that wasn’t able to happen. However, I am obviously glad that Simone Biles decided to prioritize her health and well-being over my disappointment as a viewer.”

Mr. Kelly said we must change the way we have mental and physical health discussions.

“When I say, ‘I broke my leg, I need to go to the emergency room and get it looked at by the doctors,’ no one is surprised. It makes sense,” he said. “However, people are surprised when someone says, ‘I feel down, I need to go speak with a counselor.’ We have to focus on limiting that stigma in order to get folks the help and the treatment they need.”

Coaches and people around athletes should support their decisions, Mr. Kelly said.

“[I create] an environment of practice that replicates how they’re going to feel in games and where it’s okay to make mistakes—an environment where there’s a high level of trust [and] respect. It’s a safe place for athletes to articulate things when they aren’t necessarily going the way that they want.”

“During individual sports, my sole focus is how I’m doing and thinking of things that could improve my performance. In basketball, a lot of my actions are focused on what would benefit the team,” she said. “Sometimes, this can mean more pressure to do well, which increases stress. However, sometimes it pushes me to run harder and beat that girl in front of me because my performance affects more than just myself.”

Cross Country Coach Charlie O’Rourke hopes this discussion sparks a change in how mental health is handled by professionals in our society.

“Offer more counseling and professional help for that athlete. Include professional counselors at [the] Olympics for each specific team. Make sure that all athletes have [the] ability to get counseling during the competition just like having a trainer available at each venue.”

“Simone Biles is a powerful teacher for all of us. She modeled that self is part of the whole. She realized she was having an issue, she wasn’t well, and it wasn’t safe for her to compete. That went hand in hand with recognizing what was best for the team. Simone Biles gave us a gift in that regard.”