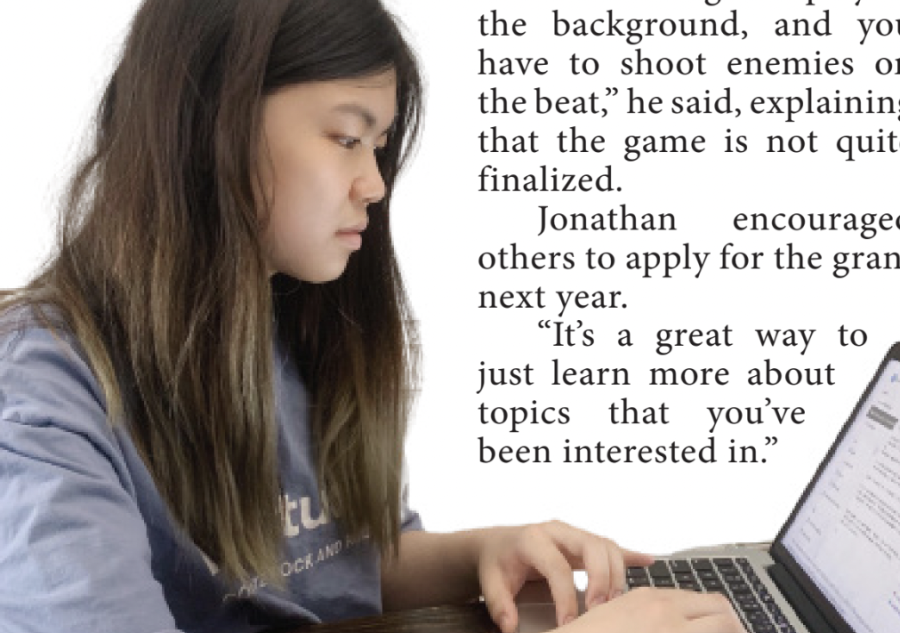 This year, all six candidates for the annual Cabot Grant received some level of funding for their proposed projects. The recipients—Sofia Chen, Kira Tian (both ’22), Nina Khera ’23, Jasmine Xing ’24, Jonathan Andreoli, and David Xiong (both ’26)—outlined and pursued a project in the math or computer science fields this summer.

Thomas and Virginia Cabot first established The Thomas Cabot Math Scholarship Prize Fund in 1990 as a permanent endowed fund. While the official description of the prize states that there should be two recipients, Upper School (US) Math and Computer Science Department Head Chip Rollinson said the committee, consisting of all members of the Middle School (MS) Math Department and US Math and Computer Science Department, decided to “spread the wealth” this year after reviewing the applications. The committee ranks applicants on a numerical scale, Mr. Rollinson said.

“The poll gives us a sense of which ones the Math Department feels most strongly about,” Mr. Rollinson said. He and MS Math Department Head Richard Chang finalized the choices and determined how to allocate the money.

“This year, all six of [the applications] had proposals that seemed worthy of receiving grant funding,” Mr. Rollinson said, adding that all the project proposals fit within the $4,000-5,000 annual budget.

Students don’t have to take the hardest classes to receive the grant, Mr. Chang said.

“The purpose of the grant is to encourage all students to study math and technology,” he said. “It is open to all students who can show a sincere interest in what they would like to pursue with the grant. It is certainly not limited to students in honors or [Advanced Placement] math classes.”

Sofia’s proposal for a coding camp for elementary school girls stood out to him, Mr. Chang said.

“She was creating a way for students who might not see themselves as mathematicians and computer scientists to challenge their self- perceptions,” he said. “[It had] such a strong focus on community service and equity.”

Sofia used her $750 grant to teach two two-week courses for young girls on the intersections of computer science and art. She was inspired by personal experience, Sofia said.

“I remember [in] fourth grade technology classes, I would always be really sad because everyone else seemed to know what they were doing, especially all the boys,” she said. “I felt like it was a club that I wasn’t a part of and I could never be a part of.

Sofia said she combined art and computer science to get her students more excited about the work.

Kira used her $177 grant to take two Coursera courses: “Introduction to Probability and Data with R” and “Game Theory.”

“I feel like math is an important tool, no matter what subject you study,” Kira said. “Even if you do research in social science, it’s always useful to have math to do data analysis.”

Nina received $900 after applying for the grant “on a whim.”

“I did not think that I would get it, but I figured that I’d miss out on that chance if I didn’t,” she said.

“I’ve learned a lot about the fundamentals of artificial intelligence and different neural network types,” she said. “I’ve also been able to apply this to another project I’m working on, which helped us secure funding to build out our idea.”

Jasmine chose to put her math skills to the test with her $275 grant at the American Regions Mathematics League (ARML). The league began in the spring, she said, and the national competition took place on June 5. Jasmine competed on the Eastern Massachusetts team in ARML, and she said she hopes to participate again next year.

“It’s really rewarding to work with other people on challenging problems because everyone brings a different perspective, and everyone solves problems in different ways,” she said. “Being able to work with others to see how they solved a problem gives you a lot of insight on other ways you can think of the problem.”

David used his grant prize of $350 to create a statistical model using Statistical Analysis System (SAS), a programming language, to estimate the death toll of COVID-19 in the United States. He said he was inspired to research this by images of people suffering from the virus.

Jonathan used his grant of $1712 to continue working with a tutor. He made a video game using the C# programming language through a game engine called Unity. “Right now I have a rhythm game, sort of—a song will play in the background, and you have to shoot enemies on the beat,” he said, explaining that the game is not quite finalized.

Jonathan encouraged others to apply for the grant next year.

“It’s a great way to just learn more about topics that you’ve been interested in.”