Alum achieves Olympic dream over a decade in the making 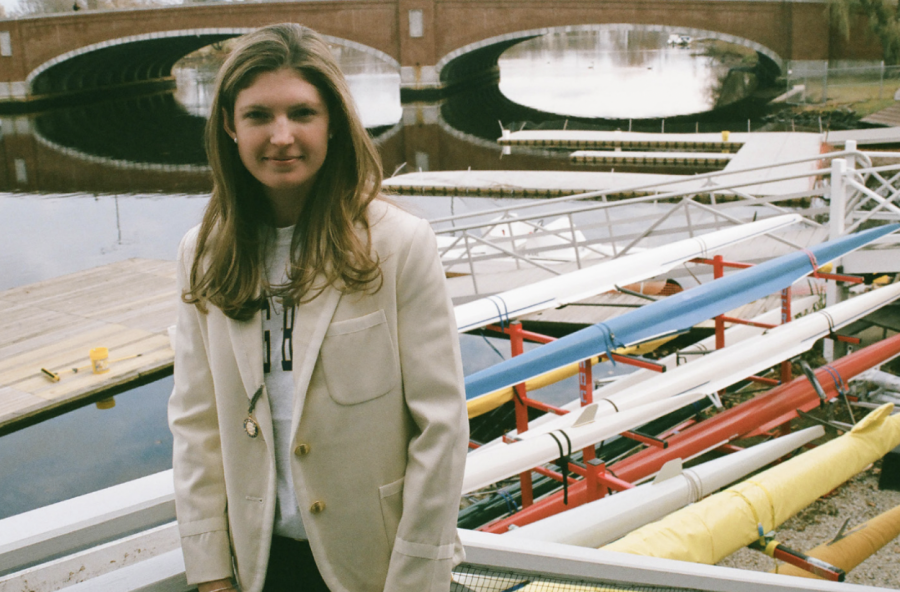 As a middle schooler, Cicely Madden ’14 had a vision: to row in the Olympics. In the delayed 2020 Tokyo Olympics, her dream came true as she rowed alongside Alie Rusher, Meghan O’Leary, and Ellen Marie Tomek in the US Women’s quadruple scull team.

Cicely’s rowing career began when she was 12 at Community Rowing Inc. (CRI) in Brighton, Massachusetts. Paige Madden ’09, Cicely’s sister, was already rowing at CRI and at the school. Cicely was excited about rowing even before she embarked on her rowing journey, Paige said.

“When she was in middle school, she wanted to do winter training with me for rowing,” Paige said. “We, most nights in the winter, would go to the [Watertown] high school and work out together.”

Once she started rowing at CRI, Cicely said, she fell in love with sculling, a type of rowing involving one oar in each hand. Cicely rowed on the school’s girls’ varsity crew team in her freshman year at the US and rowed on CRI’s varsity team all through high school.

From her year on the US team, Cicely’s interactions with the upperclassmen made the season meaningful, she said, especially since the school’s spring season is its shortest.

“Some crews row all year together, so I think our boat really came together that season in a short amount of time with the help of the seniors especially since the school’s spring season is its shortest.”

While at the US and rowing for CRI, Cicely went to USRowing Youth National Championships as a single sculler twice, receiving fifth place in 2011 and winning gold in 2013. After rowing all four years at Brown University, Cicely won the 2019 World Senior Trials II for double sculls with three-time Olympic rower Gevvie Stone, sending her to the 2019 World Rowing Championship.

“During selection camp our boat immediately clicked. We had never officially raced together, but we were excited about the potential and were showing some fast times.”

Rowing is a difficult sport because of the balancing act between its collaboration and independence, Cicely said.

“The special thing about a team boat is that you all come together with one common goal,” Cicely said. “We have our individual goals and experiences, but you have to work together to achieve them. I think when you believe in yourself and focus on how you can contribute to the boat, that’s when you all thrive together.” In the heat, Cicely and her team placed fifth before placing sixth in the repechage, a redemption round that could offer teams a spot in the finals, and fourth in the Final B, a final round without an opportunity for medals. Despite the results, Cicely said, she will learn from this race and continue to look forward.

“I think all you can do is learn from your mistakes, individually and as a boat, and carry that into the next race.”

With her first Olympics behind her, Cicely looks forward to her next steps in rowing.

“I want to keep aiming to see how fast I can be,” she said. “I’m young in the rowing world. I’ve learned a lot, and I have a lot to learn, and I think I can carry these experiences with me to make [myself] a stronger rower.”

In Speechwriting and Public Speaking, a senior elective offered at the time by Allison Kornet, Cicely wrote a speech about her first Junior World Championships in Bulgaria.

“There will always be major obstacles that will get in the way of your goals,” she wrote, “but if you just focus on the result, relax, stick up for yourself, eventually you will achieve them.”

Ms. Kornet worked with Cicely in her freshman and senior years as head coach of girls’ rowing and English teacher, respectively.

“I’m just so proud of her commitment and grace over time,” Ms. Kornet said. “To compete at that level, you have to be willing to put in a whole lot of work and to be doing it for more than just results. She rowed for the joy of it. She loved the chase. She loved the feeling of the water and the team. That’s what makes you an Olympian.”