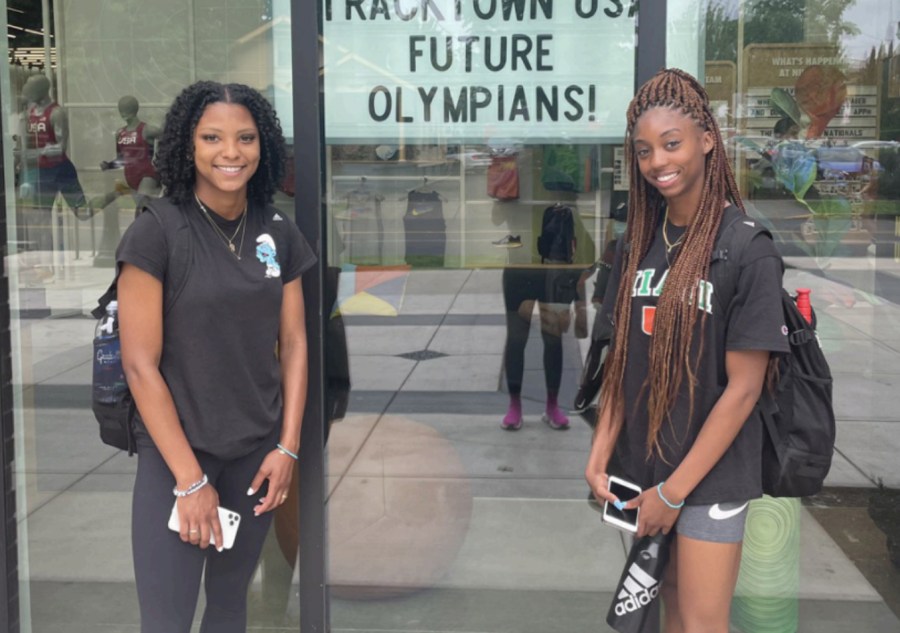 When Samirah Moody ’21 saw Hayward Field, the site of the Nike Outdoor Track Nationals, she was taken aback, she said.

“Being at a school that had a whole stadium dedicated to track was incredible because you often see tracks [that] are built around football fields, [but] there’s never really a space dedicated to the sport of track and field. To see it prioritized and to see such nice facilities was really cool.”

During Nationals, Samirah won the 200-meter dash finals, becoming the best female high schooler in that event in the country. “I was proud of myself and shaking my head in disbelief,” Samirah said, “not because I didn’t believe I could do it, but because now everyone else would believe, too.”

From June 30 to July 3, Samirah and Peyton Rollins ’22 competed at Nationals in the 100- and 200-meter dashes and the 100-meter hurdle, respectively. On the first day of the meet, Samirah placed seventh in the girls’ 100-meter preliminaries, which determined the top nine athletes advancing to the finals, and strained her hamstring with the 100-meter finals and 200-meter preliminaries and finals still ahead. Her leg felt about 70% for the remaining events, she said.

“That was really challenging, physically and mentally, to try to overcome,” she said.

Samirah attributes part of her success at Nationals to her mentality change after losing her junior year track season to COVID-19, she said.

In the girls’ 100-meter hurdle preliminaries, Peyton placed fifth with a personal best of 14.09, which qualified her for the finals. In the finals, she came in ninth at 14.23 with a margin of .65 seconds between her and the first-place hurdler.

The girls found out they qualified for Nationals in June of 2020 with times from the 2019 Independent School League (ISL) Championships. Only 34 athletes qualified for the girls’ 100-meter hurdles, which is 12 fewer than in 2019, to mitigate COVID-19 risk in hotels and training space. Most events followed a similar trend, so the athletes at Nationals were the best of the best—a worry-inducing environment, Peyton said.

“Knowing that you made it and you [were] meant to be there was occasionally challenging because being around all the best people in the country means sometimes you can psych yourself out,” she said. “I’d have to remind myself I have a place there.”

The two first met in 2018 during Peyton’s first and Samirah’s second year at the Metro-Cobras, a Boston based youth track team. Samirah then transferred to the Upper School (US) in the fall of 2019, joining Peyton on the school’s track and field team. They continued training together during the first two trimesters of the 2019-20 school year until COVID-19 canceled the school’s and Metro-Cobra’s in-person track practices and meets in the spring and summer.

ISL track resumed for the 2021 spring season, and Samirah and Peyton competed in meets for the Metro-Cobras and the school. The school practices helped Peyton relieve stress and relax, she said.

US Track and Field Coach Charlie O’Rourke said he admired how, as captains this spring, Samirah and Peyton always prioritized the athletes they were teaching.

“They both did a great job as captains in a difficult COVID environment. They were both great leaders and put the team first during the season,” he said.

Coach O’Rourke added that they’ve been training for Nationals since the fall with “extreme talent, total dedication, and focus on their goals.”

“It really is impressive that they peaked when it counted.”

Samirah plans to continue her track journey as a freshman at Villanova University in the fall, while Peyton continues training with the Metro-Cobras and school track team. Peyton hopes to continue running in college, she said.