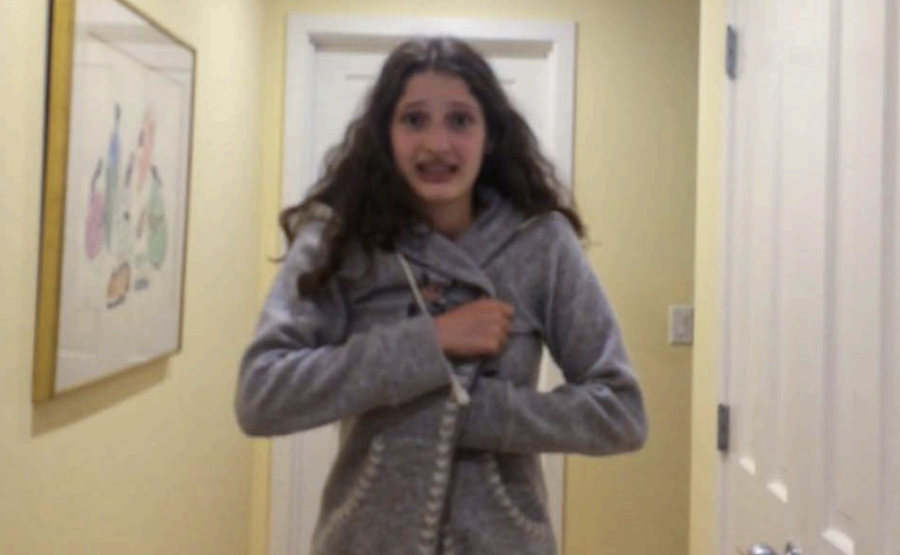 “Detention? On Friday? You can’t give me detention on Friday,” Hannah Curhan ’23 said in her monologue, “Detention,” which received an Honorable Mention in May at the Massachusetts Educational Theater Guild’s (METG) Monologue Writing Contest. “Especially for dress code. Do you know how much this outfit costs?”

After hearing about the contest in February, Hannah submitted her two- minute performance in March, which was one of five to receive an honorable mention out of high schoolers across Massachusetts.

“I chose to enter the contest because I really love writing creatively, especially for the stage,” Hannah said. “I thought it was a really exciting opportunity.”

Inspired by the contest, Hannah wrote her monologue from the perspective of a middle school girl trying to get out of a detention for breaking the school’s dress code. The character uses indignation, anger at the patriarchy, and charm in her efforts before realizing the detention won’t interfere with her social life and accepting it.

“I got the idea for this monologue out of the blue when I was thinking about school dress codes and how they are often sexist by making girls hide their bodies so they don’t distract boys,” Hannah said.

Originally, Hannah said, she had planned to write a satirical apology letter in which the character ranted about the misogyny of dress codes, but she redirected her piece after attending a Zoom lesson on monologue writing hosted by METG.

“The author teaching the lesson explained the usefulness of writing a monologue in which the character is trying to convince someone of something or to get something from them,” Hannah said. “It is important in a monologue for the character to make discoveries as they talk instead of just reciting a practiced script.”

One of Hannah’s favorite parts of her performance was when the character attempted flattery as a method of persuasion, she said. “I love the part where my character says, ‘And you’re such a good teacher. I just love your math—uh—history. I love your history class.’”

Hannah’s performance involved many hours of writing, acting, and revising, she said.

During the writing stage, Hannah improvised as the character in her performance before writing a script.

“I jumped into the character of the middle school girl and tried to speak the monologue, improvising as if I were her in the moment,” Hannah said. “I chose the personality of a popular, slightly shallow middle school girl early on in the process because it fit well with the comedic persuasion I wanted to explore.”

After a few weeks of multiple audio recordings, verbal practices, and a performance for a few friends and family members, she submitted the monologue.

“The most important thing I gained from the experience of submitting a monologue to a contest and then achieving an honorable mention was confidence,” Hannah said. “I had a great time writing ‘Detention,’ and now I hope to use my newfound skills more often. I definitely plan to continue writing monologues in the future.”

Upper School Theater Teacher Ross MacDonald, who served as Hannah’s sponsoring teacher in the contest, was impressed with Hannah’s writing and acting ability.

“The thing that I was most impressed with, and what I think Hannah has grown with as an actor over the last couple years, is her ability to talk to someone rather than talk at,” Mr. MacDonald said. “The [initial] indignation of the character to trying to charm her way out of it to trying to then weasel her way out—I was impressed with the way the shape of the monologue differentiated.”

Middle School Theater Teacher Christa Crewdson, who told Hannah about the monologue competition and taught her in seventh and eighth grade, said Hannah was hardworking and professional when they worked together.

“She was always dedicated—just the kind of theater kid you want in your class.”

Ms. Crewdson added that she was impressed with Hannah’s performance and the artistic choices she made.

“I thought it was very smart to address it to somebody, and it worked perfectly with the camera,” Ms. Crewdson said. “She has definitely grown as an actress since the last time I worked with her.”

After watching “Detention,” Alexandra Kluzak ’24 emphasized Hannah’s talent for capturing both an enjoyable and realistic portrayal of the young student.

“The witty and thoughtful writing managed to so successfully capture a typical middle school girl,” Alexandra said. She added that the mischievous way Hannah’s character tried to wheedle out of detention reminded her of aspects of middle school.

Hannah’s monologue is available to watch on the school’s YouTube channel at https://www.youtube.com/watch?v=Ftd-DrGkSSE.