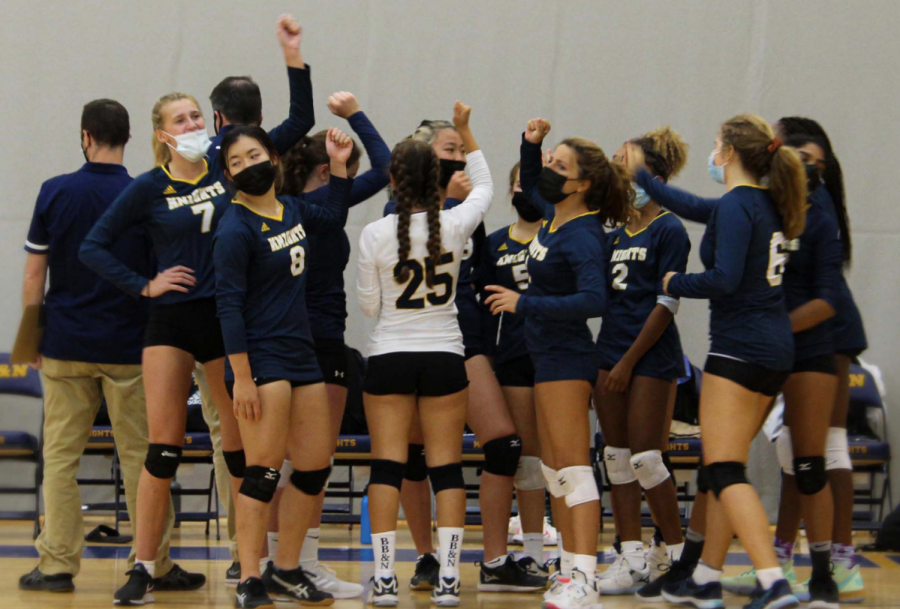 Freshmen and sophomores whispered among themselves as they walked into the gym on September 24 to a sea of blue, gold, red, and green face paint and balloons. After the initial confusion subdued, freshmen, sophomores, and upperclassmen who were new to the Upper School this year and last year ran through a tunnel of senior prefects and were knighted, signifying their official entrance to the US and the return of the school’s homecoming weekend.

“I was really happy to see our school spirit come back to life after the past year and a half where I felt like we weren’t able to bond as a community,” Senior Prefect Alicia Maginn ’22 said.

Emilia Khoury ’25 said the idea of being knighted was overwhelming at first, but after watching her peers run through the tunnel, she became excited to be welcomed into the school’s community.

“[The knighting ceremony] established a sense of community because it was all the grades mixing and becoming united,” she said. “Being a freshman, it’s hard to integrate with other grades, but the ceremony gave us the opportunity to spend time with people we usually wouldn’t talk to at school.”

Knight Games Captain Laura Cox ’22 also emphasized the community aspect, and she said part of her inspiration to become a captain came from the desire to make others feel connected with each other.

“[Being a captain means] you represent your color, make sure everyone is into it and try to get your team members excited,” she said. “Slapping the kids with red paint is always a good way to relax after a long day of calculus.”

Head of School Jen Price said the event was an important way to make people feel connected to the school after so much disconnectedness.

“We’ve tried so hard to make up for lost time, whether it be Bivouac [or] the Knighting Ceremony, and I’m just pleased that we can be back in community with one another,” she said.

The sense of community carried over to homecoming the next day, when Girls Varsity Soccer (GVS), Varsity Field Hockey, Varsity Volleyball, and Cross-Country competed at home. All but one team won their competitions.

Associate Director of Athletics Kindyll Dorsey, who helped coordinate the games and plan homecoming, said the day was exciting and a way for the larger community to participate.

“I really enjoyed the community support of our teams competing throughout the day,” she said. “I also enjoyed seeing so many families enjoying themselves, mingling throughout the campus, whether it be playing catch on the football field, watching games, sliding on the bounce slide or engaging in conversation with the PA, DEIG Team and the Alumni/ae Office.”

Varsity Soccer Player Ava Venuti ’23 said she loved playing in front of friends and family after not having fans during the pandemic.

“The energy of the crowd really powered us forward, and it added a level of fun and a sense that you’re playing for your entire school community,” she said. “I hope that the enthusiasm displayed by much of the community carries on throughout the season and the year because it truly does make a difference for the athletes on the field.”