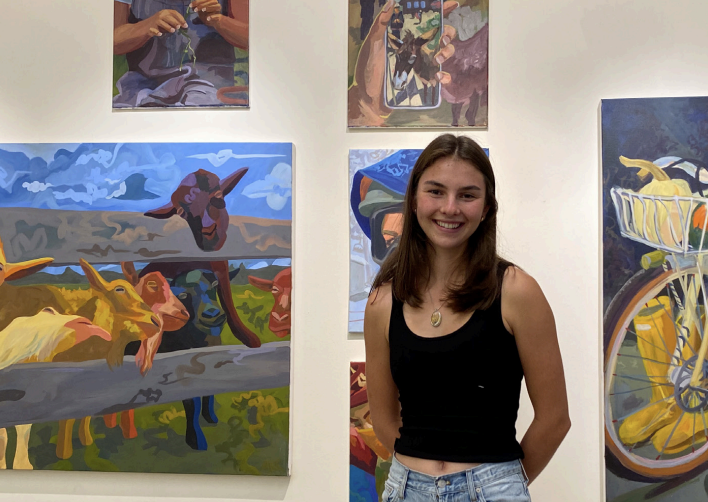 Hanging in the gallery area on the second floor of the Upper School (US) from September 21 to October 8 were representations of vibrant mountain landscapes, a bike, a pair of ski boots, the occasional farm animal, and family members—all created by Advanced Drawing and Painting student Arden Conine ’22.

Arden’s palette, heavy on ultramarine blue and earth tones, as well as explorative pieces protruding from cut sheet metal and a frame, covered the walls. Arden created all of the work last year either in class or, in the case of the metalwork, remotely in virtual Afternoon Art.

Arden is the first student to have a solo show in a US gallery. US Arts Teacher Lanie Wurzel approached Arden this fall in hopes of spotlighting the volume of work she was able to make last year.

“This is something I’ve thought about doing for a long time: giving seniors solo shows on the second floor,” Ms. Wurzel said. “Arden’s the first person I’ve asked, partly because she made such a large body of work.”

Ms. Wurzel said she’s enjoyed working with Arden as a student this year and last year.

“I’m just really proud of Arden. She’s a great student and a really hard worker. This show really shows the power of when you commit to something and work really hard on it; you can get really good at it.”

Arden said seeing her art as a cohesive body of work was a meaningful experience.

“Having them all up there is sort of the first time I’ve looked at them all together, which is super cool, and I guess my color palette was super similar for all of them, and that was cool to see.”

Her work draws inspiration from her camera roll, her family, and Ms. Wurzel’s class prompts, which included “narrative hands and feet,” “self-portraits without actual portraits,” and “a night painting.”

Narrative paintings like Arden’s create imagery with emotional or other subtext, like a story might, as opposed to technical paintings that focus on skillset and technique.

The exhibition includes a series of goat paintings, which was a new concept for Arden, she said.

“I’ve tried to do things straight out of my imagination,” she said. “With the goats, that’s what I wanted to do. But then, the weekend before I painted them, I found myself on a farm with these goats. So, I took pictures. All of the things in the gallery are photos I’ve taken, except for the bear painting, which is an old family photo.”

That old family photo, Arden said, became her favorite painting in the gallery.

“It’s called ‘Bear on Trash Mountain,’ and I felt like I could spend forever on it because I loved the process,” she said. “It’s super detailed, which isn’t something I normally do.”

Arden said she enjoyed working with new materials, as she did with the sheet-metal portraits hanging on the wall opposite from most of her work.

“I really enjoyed the metal pieces,” she said. “It was sort of a thing of the pandemic. I was at home, so I had access to stuff like that. In the future I would definitely want to do more with more materials.”