Students whittle away time in the red shed 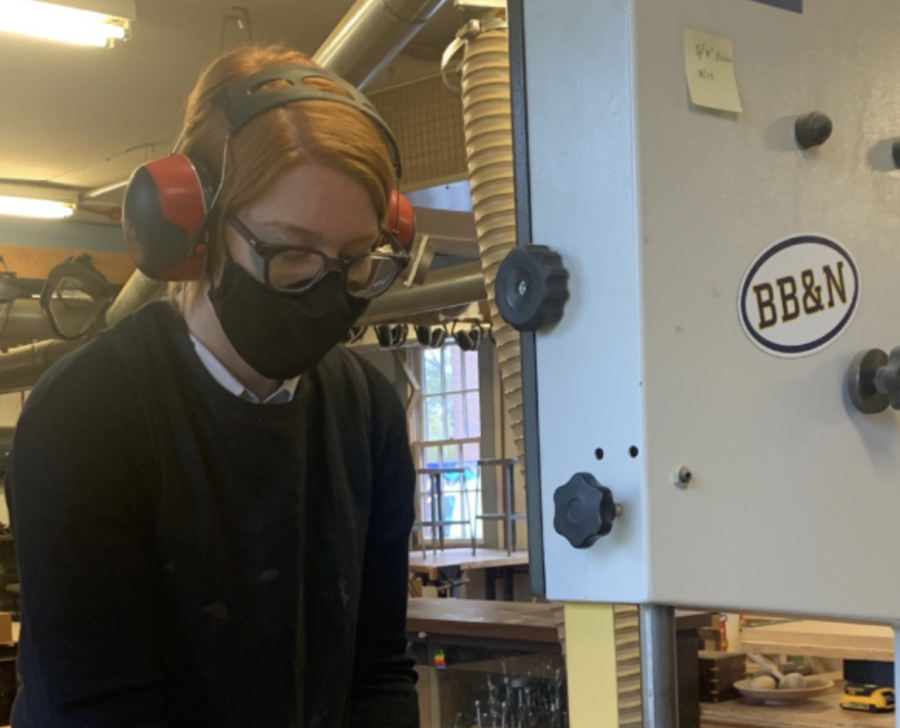 What goes on in that little red building by the baseball field? Many Upper School (US) students know this as the woodworking studio, but what happens inside?

On the afternoon of Monday, October 25, 10 10th and 11th grade Introductory Woodworking students rush into the studio, seeking respite from the pouring rain. They all quickly drop their backpacks on the wooden bench near the door and take their places on their stools around one of the many individual work desks.

US Woodworking Teacher Anna Van Voorhis welcomes them to class, encouraging the students to take out their sketchbooks as she begins a presentation on their next project.

“For the lantern project, we are focusing on modular design, precise measuring, and working from a blueprint, and using the laser cutter to create unique, perforated panels for our lanterns,” she explains. “The panels will be designed with light, pattern and narrative in mind.”

She tells students about the project’s inspirations, which include 20th century and contemporary artists and designers such as Olafur Eliasson, Jenny Holzer, Isamu Noguchi, Zaha Hadid, Kara Walker, Keith Haring and Yayoi Kusama.

“What is art?” Ms. Van Voorhis asks at one point in her presentation.

Ms. Van Voorhis then shows the work of an artist who had created an exhibit of a room that has a singular hole in the ceiling.

Henry Kirk ’24 exclaims. Other students counter his comment with different perspectives, and the discussion continues until the students break for individual work time.

Ms. Van Voorhis directs students back to their stations to finish their current project: self-portrait mobiles using one object they found and one they carved from wood.

This encouraged students to incorporate both personal sentiment and new skills into a project, Ms. Van Voorhis told The Vanguard.

Ms. Van Voorhis is in her first year of teaching at the school and hopes to incorporate her background in digital fabrication and sculpture into the woodworking curriculum, she said.

“While any future syllabus will have wood as its backbone, I am also interested in fostering an interdisciplinary curriculum that incorporates other media such as digital fabrication, small electronics and textiles,” she said. “The upcoming Chain of Lanterns project is an example of such a project as it incorporates traditional joinery with digital fabrication in the form of the laser cutter.”

Ms. Van Voorhis said the mobile project encourages introspection and artistic narrative in the students’ work while also allowing them to hone their technical skills.

“Since this is a self-portrait, the juxtaposition of the two objects chosen should speak to something that is important to the individual student and should tell a story when paired together,” Ms. Van Voorhis said.

As students finish their current project, one can see mobiles in progress around the room, including that of a tree, headphones, and a globe.

“I chose headphones to carve because I’m always listening to music, and to me the headphones represent my interest in music. I liked that I got to learn a new skill—carving—in regards to woodworking,” Rohan Durfee ’23 explains.

Students work on their projects at their own pace, often chatting with peers and listening to music. Rohan said the relaxing speed of the work is a side benefit of the class.

“I like that it’s in the middle of the day sometimes so that if you’re worried about a test that you have, or homework, it’s therapeutic,” he said.

Ms. Van Voorhis’ phone alarm sounds, marking the end of class. She tells the students to start putting away their projects, and they grab the studio brooms to sweep the floors.

Leaving the oasis of the woodshop as they head back out into the rain, the students say goodbye to Ms. Van Voorhis and rush back to the main building, talking about their projects and what they will work on next.