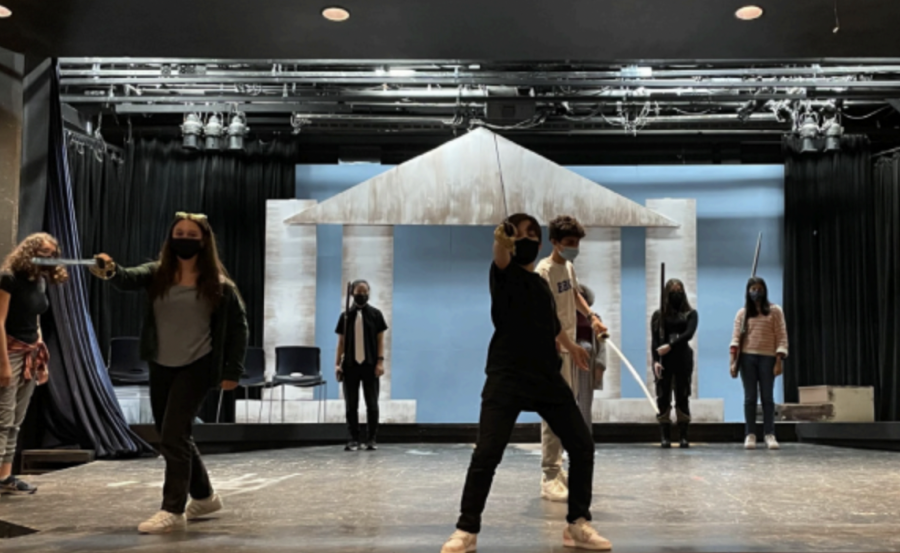 During a rehearsal for “Cyrano,” the fall play, the cast—in character—asked one another questions ranging from “Where were you born?” to “What is your relationship like with your mother?” in pursuit of a deeper understanding of their characters and the show.

“Cyrano” is the story of Cyrano De Bergerac, a soldier, poet, genius, and honorable man living in Paris in the 17th century. Despite Cyrano’s preeminence, he suffers the burden of psychological scarring—the product of a physical deformity.

The themes of the show include the struggles between loving and being loved, fearing the unknown, brotherhood, relationships, and the cost of war. Although Cyrano’s world looks different from that of Upper School (US) students, US Theater Director and “Cyrano” Director Ross MacDonald said, the audience will find it relatable to many real-world circumstances.

Mr. MacDonald said he prioritized the process over the final presentation in this production. He aims to create a safe space, he said, where the cast feels comfortable making mistakes and learning about themselves and their characters.

The challenges of this production and of theater, Mr. MacDonald added, prompt growth for actors.

“You ask people to try to be somebody that they are not, and to do that there is this process of stripping oneself bare,” he said. “It’s a really hard thing to ask anybody to do, but it’s especially a hard thing to ask a teenager to do. Acting in a production like this is an incredibly transformative experience when you tap into really taking those risks and growing out of those risks.”

“Cyrano” has 28 to 30 characters, and with only 12 cast members in this production, actors play multiple characters. Mr. MacDonald said fewer people has led to an increased level of creativity.

“Some of the scenes are going to be quite stylized because we have to fill the stage, but we don’t have the bodies to do so,” he said.

“For example, how do we create the battlefield of Arras with 12 people when there should be 40 people stabbing each other?”

In addition to the small cast size, unlike the primarily upperclassmen casts of the fall plays in past years, this year’s cast is mainly ninth and 10th graders, with nine underclassmen and two upperclassmen. Mr. MacDonald said the underclassmen are open- minded and eager to be on stage, and he identified the upperclassmen as setting a “wonderful example.”

Julia Shephard ’22, who plays Cyrano and has participated in the fall play for the past three years, said she’s enjoyed the vivacity of the cast.

“There’s a very different type of energy, especially since there are younger members of the cast,” she said. “I think a lot more excitement and passion are going into the play with them here, and I’ve enjoyed the process we’ve had so far.”

On the other side of the curtain, US Costume Designer Louise Brown said she and the costume team kept societal structures and groupings in mind when designing.

“I looked at the signature silhouettes of 17th century clothing and found some modern-day parallels,” she said. “I was interested particularly in how modern-day social groups adopt the same clothing to create a sense of common purpose and identity, much like uniforms have for soldiers of every era.”

Similarly, Theater Design & Production Coordinator Adam Howarth said he and his team of five students have tried to incorporate elements of the Rococo and Baroque art periods in which “Cyrano” takes place.

“The main concept I posed for the design of the set, lighting, video, and sound was: What is the relationship between a play written in the 1900s about the 1700s and a play being performed in the 21st century?” he said. “The answer came from borrowing the realism of basic structures of the 1900s and embellishing them with 21st-century technology, specifically video, akin to the embellishments of the Rococo period.”

Finn Wiegand ’25, who plays a soldier and a Gascon cadet and is on the stage crew, said he’s enjoyed trying out acting and assisting Mr. Howarth in the stagecraft for the production.

“I was definitely leaving my comfort zone, but it was very enjoyable,” he said. “I would highly recommend theater and stagecraft to anyone who is interested or wants to challenge themselves.”