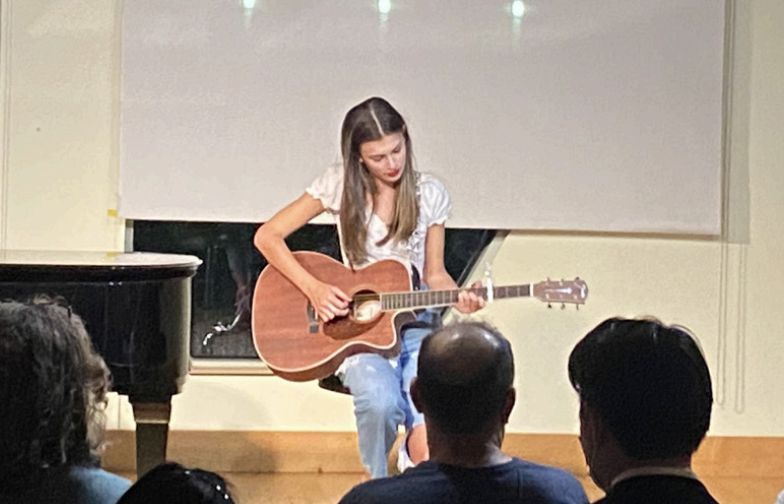 Small whispers escape from excited lips. The room is thick with attentiveness and anticipation as the dimmed lights set on a traditional stage for this year’s cabaret night singers and Nejma Reza ’23 took the stage to sing “Glorious” from “Meet the Mormons.”

On November 12, cabaret night, organized by US Chorale Teacher Joel Sindelar, 19 people gathered in the Upper School (US) Chorale Room and 28 people joined over Zoom to hear the voices of performers Rania Mankodi ’25; Rose Fahy ’24; Amphitrite Ma, Natalie Rudnick, Nejma Reza, and Anjali Reddy (all ’23); CC Chung, Gillian Goddard, and Alex Zhang (all ’22). Rebounding from last year’s online cabaret night, being in person this year created “a night to remember,” Alex, who sang “Go the Distance” from “Hercules,” said.

“I noticed that my confidence as a singer improved,” he said. “Hearing the power in my voice accompanied by a physical piano in the room felt a lot better.”

Having sung at cabaret since her freshman year, CC was excited to get back on the Chorale Room stage for “When Hope Goes” from “The Spitfire Grill” and “Spring Cleaning” from “Tales of the Bad Years,” she said.

“There is so much more excitement and anticipation for the performers when it’s in person. I got up there and realized that I could walk around and utilize a real stage. I’m beyond thankful that my last BB&N fall cabaret night wasn’t in front of a computer screen.”

US Chorale Teacher Joel Sindelar said he was proud to provide his students with an opportunity to sing a solo performance in person.

“Even though this year’s in person cabaret was more work, as a singer it feels a lot better to be singing directly to somebody rather than singing into a camera.”

Because this is his second year at the school, the night was Mr. Sindelar’s first-ever in person cabaret night, so the organization “was like a detective novel,” he said.

“I found out that there was a woman named Valerie [Becker P’15] who played the piano and contacted students and past teachers until that piece was resolved,” Mr. Sindelar said. “Once that was settled, the rest just fell into place.”

Audience members were also excited for the return of this tradition, US Math and Computer Science Teacher Mark Fidler, who attends cabaret night every year, said.

“It’s truly wonderful to see the kids performing something meaningful to them personally,” he said. “All of the songs have stories. Because of this, I am still able to enjoy them even if I’ve never heard them before.”

Following Taylor Swift’s new release of “Red (Taylor’s Version),” Rose, a first-time cabaret performer, felt inspired to emulate her idol’s work by singing the original 2012 hit, a meaningful song to her. She also played guitar, which she taught herself during the pandemic, during the song.

“‘Red’ is beautifully written. I love how the lyrics are set up. You’re placed directly in what she was feeling in the moments that inspired this song. As an aspiring songwriter, I love songs with deep, well-written lyrics.”

Songwriter Gillian performed two songs: a duet of “Landslide” by Fleetwood Mac with her mother, Janet Goddard P’20,’22, and “Just for You,” an original song.

The duet, in which they both sang and Gillian played the guitar, reflected the evolving relationship between her and her mother as they grow older, Gillian said.

“[Landslide is] one of my mom’s and [my] favorite songs,” Gillian said. “It’s about huge life and relationship changes and development, and, with my leaving for college soon, I felt like it reflected how our relationship [is] changing.”

Gillian said the second song she performed with the piano is her favorite song she has written. It represents a turning point in her songwriting, which she began when she was four or five years old, she said, because of the writing based around the hook rather than in a linear order.

“Some people have a diary, and I just write songs, instead,” Gillian said. “I wanted to repeat [the hook] again and again because I felt like it was the pinnacle of the song. I learned how to write in a non-form-fitting way.”

Tess Bierly ’22, an audience member and former cabaret night performer, said she appreciates events like this where she can support her peers.

“Whenever an opportunity presents itself to go and support other members of the community, it’s amazing to see people show up,” Tess said. “Personally, I wanted to cheer on my friends but also get to witness and take advantage of the uniqueness of this event as a whole.”

For future opportunities like cabaret night, Mr. Sindelar said he hopes to introduce a karaoke night and something experimental so students can showcase their musical interest in a less formal safe space. 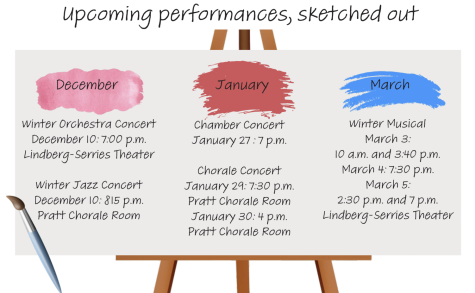