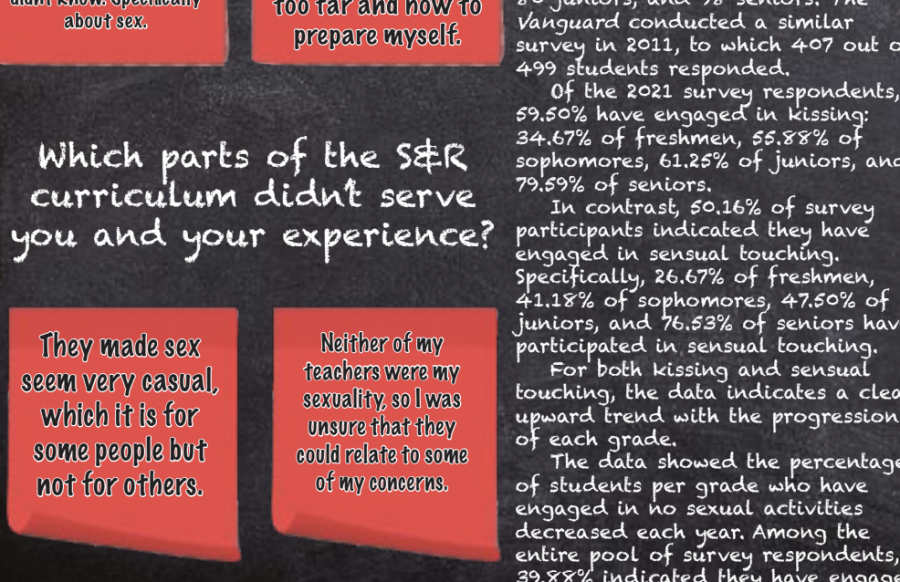 During sophomore year, all take Sexuality and Relationships (S&R), a program that seeks to educate students on safe sex and healthy relationships.

The course runs each trimester with several class sections, each taught by two teachers. The program aims to provide students with the lessons and knowledge to empower them to make informed decisions regarding their sexual health, Upper School (US) Counselor Doug Neuman said.

In The Vanguard’s recent survey on sex and relationships, 34.88% of respondents indicated the S&R program accurately reflected their experiences while 31.32% found it unhelpful. The last third hasn’t taken S&R yet.

In comparison, 28% of respondents from The Vanguard’s 2011 survey on sex and relationships found the program useless or not helpful, 30% found it helpful, and 43% had no opinion.

One 2021 survey respondent thought the course was helpful, they said.

“I learned a lot about certain terms that are important that I never really knew about. Also, I learned about certain contraceptives. Education is powerful, and having the tools at one’s disposal is always a good thing, regardless of what you might believe in.”

Sofia Khoury ʼ23 said she found the program informative and effective.

“The S&R program was helpful because I learned a lot about consent and what a normal, healthy relationship looks like.”

Another survey respondent said they viewed the course as ineffective in its goals and believed students were not engaged.

“The healthy relationships section of S&R is a joke. No one takes it seriously, and it does nothing to protect the students, especially the women who are disproportionately affected by toxic and abusive relationships.”

Others believed specific content in the course neededrevision, such as the lack of information about the asexual spectrum and LGBTQ+ perspectives, the awkwardness of hands-on contraception-related activities, and the open-endedness of discussions.

I think S&R needs more focus on the actual social aspects of sex and relationships,” one respondent said.

“There needs to be a discussion of what sex can be [and] should not be. I think people could benefit from knowing the social impacts of sex.”

While the number of students who gave positive feedback on the program remain relatively consistent between the 2011 and 2021 survey, the S&R program has incorporated several major changes in the past 10 years, including the addition of video content in several lessons focused on sexual assault, consent, and healthy relationships.

“For instance, we have some video clips from ‘Friday Night Lights’ and ‘Friends’ that students are more familiar with as a way to comment on the content rather than having the ‘what do you think about’ prompts because those tend to be awkward,” Mr. Neuman said.

A highlight of teaching S&R, Community Outreach and Engagement Specialist Candie Sanderson said, is the opportunity for answering questions and demystifying sex and relationships.

“There are no bad questions. Even the questions that sometimes people submit as jokes are really great for discussion,” Ms. Sanderson said. “It’s important to show that S&R’s not just about serious, heavy conversations, but it’s also something that can be really fun and joyful.”

English and S&R Teacher Zoe Balaconis said she sees strengths and weaknesses in the course.

“The program does a good job at teaching students about their body on the anatomy side,” Ms. Balaconis said.

“However, I think we could do a better job with the relationship side of the curriculum, [like] giving students more language and more tools to recognize unhealthy and healthy relationships.”

Ms. Balaconis also said she believes the S&R program should work to incorporate more aspects of the digital world into the curriculum.

“We don’t do much when it comesto life online. Because there’s such a general generational divide there, we teachers just don’t know how much of students’ relationships are through social media,” she said. 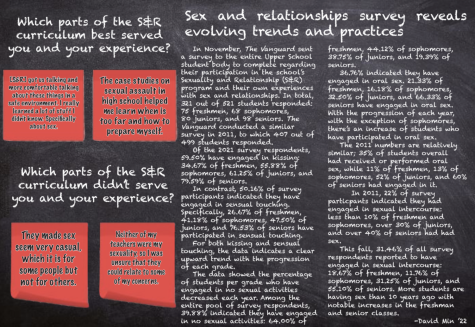