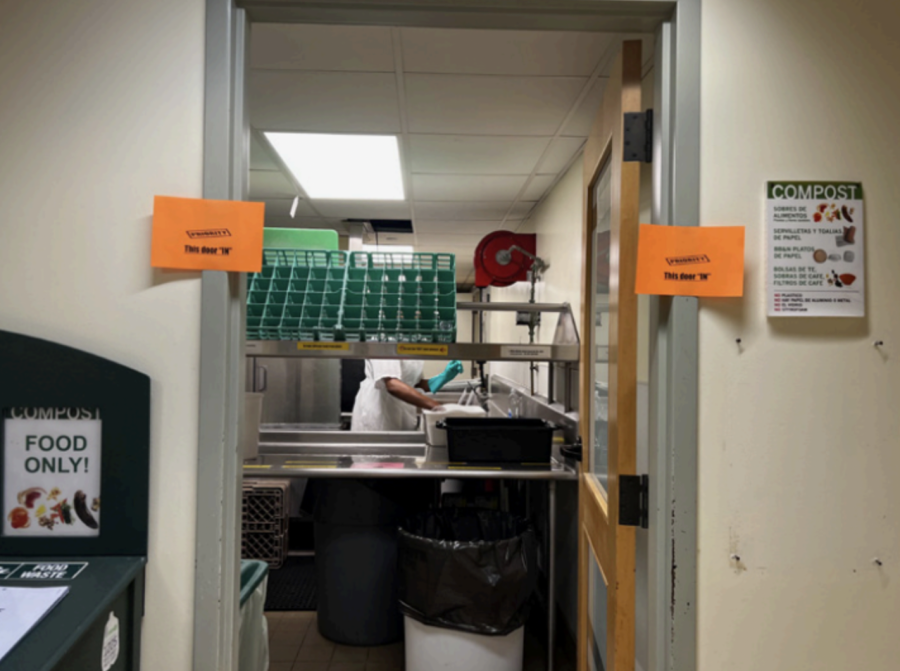 After two years of cardboard boxes, paper plates, and plastic utensils, Upper School (US) Dining Services returned to standard dishes and metal utensils on Friday, May 13.

Director of Dining Services Keith Jones said although the disposable dishes were needed during the pandemic, he prefers washable dishes. The decision was made by the kitchen staff based on CDC guidelines and practices at peer schools in the Boston area.

“Now that more people are vaccinated and boosted, the chances of us making each other sick with dishes being passed from person to person is much less,” Mr. Jones said.

Chef Jones said with disposable plates, the US was creating 10 times more trash than in pre-pandemic years.

Still, returning to normalcy during lunch has been a challenging process for the Dining Services staff, Chef Jones said, since many community members never had experience with the dish protocol. He explained freshmen have been like “lost puppies” coming back from Bivouac when it comes to what to do with their used dishes.

“When most students are finishing up and getting ready to leave, I’ll remind people to bring their dishes back. I have to,” he said.

Dining Services organized presentations at assembly and class meetings and posted pictures across the US to inform the community on how to return dishes to the washing station. Chef Jones said he also filmed a video demonstrating the process with Elizabeth Chin and Nejma Reza (both ’23), which was played during advisories.

Nejma, who was new to the school this year, said she didn’t know the school had real dishes until they brought them back.

“We have a few more responsibilities now but its worth it because it’ll really help the environment,” she said. “We waste way too much as human beings, so to now have reusable dishes is awesome.”

“We were generating so much waste. People weren’t composting, or recycling, and especially during COVID, everything had to be wrapped in plastic. We were using plastic utensils, non-recyclable plates—all these little things. It was just a lot of waste being generated, and it was needed for COVID safety, but it had a horrible environmental impact.”

Madeleine said she hopes the return to dishes will give students the chance to relearn the importance of recycling and composting.

“People still don’t pay attention to composting and recycling, but that’s something the Eco Reps are working on. All environmental practices got thrown on the backburner with COVID because that had to take priority. Now, it’s time to reassess and get back to where we were before.”

Niels Cohen ’24 said the change makes fewer people leave disposable plates across the Commons since now they must bring it to the washing station.

“Everyone should be responsible for picking up after themselves,” he said.

US History Teacher Matt Turnbull said the return to regular dish routines takes a little getting used to but has symbolic meaning.

“I’m glad to see the dishes back. It’s another sign of kind of normal life,” he said. “On the first day of using reusable dishes, I walked in the ‘in’ door, put my dish down, and then tried to walk right out the door and almost crashed into somebody. So, I still need a little practice.”