US Theater Director reflects on emerging from service in Afghanistan 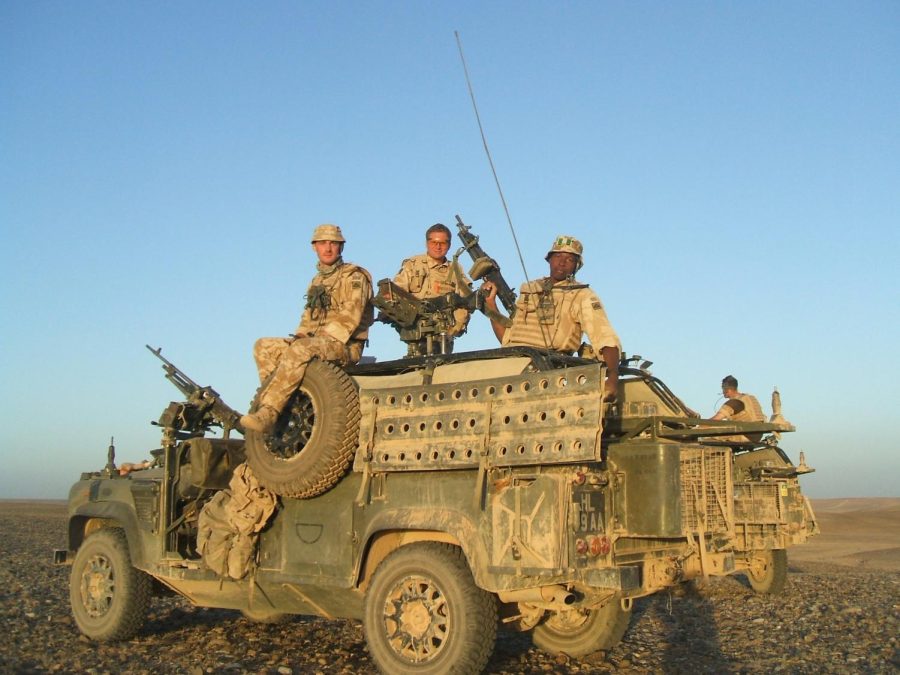 In December 2004, Upper School (US) Theater Director Ross MacDonald, serving as a rifleman for the 12th Mechanized Brigade of the British Army, was dispatched to Helmand, Afghanistan. Over a deployment that would last seven months and a military career that would span three years, he grappled with immense loss and what it truly means to serve, he told The Vanguard.
Why did you enlist in the British Army?

I had wanted to join the military since elementary school. When I was 18, I did a potential officers course—a military leadership training program with the Guards operated by the British Army—but after university I went to drama school instead of joining the military. I thought about joining the reserves whilst I pursued a career as an actor. But one vocation was always going to take precedence over the other, and as the war continued in Afghanistan, I decided I had to join the army reserve. I had this small bit of experience in the army; I’d had family history in the Armed Forces, and I looked up to my grandfather who served in World War II. At 31 years old, I was pushing the ceiling age-wise; I thought, if I don’t do it now, I never will. For me, actions always speaks louder than words. I genuinely felt it wasn’t fair for 18-year-olds to put their lives on the line while the rest of us sat back.

That doesn’t mean Afghanistan wasn’t very complicated. Maybe there was a naiveté of trying to go back and right the wrongs of Britain’s [interference in the region in recent times and throughout history]. I believed we were helping the Afghan people. Some people talk about the war as an act of neo- imperialism, but the British have a duty to the whole world because of our colonial past. We have a responsibility to clear up some of our mess. If I didn’t serve in the army, I’d regret it for the rest of my life. I believe in the Queen, and I believe in service. You can’t call yourself a patriot if you’re not willing to serve your country.

What is your definition of a patriot?

A patriot is somebody who serves their country. A patriot can come in any form, shape, race, or be of any ethnicity. Both my Welsh and Scottish families have endured systematic oppression from English governments throughout history. My grandfather used to be beaten in schools for speaking Welsh, and he still joined the British Army at 15. A patriot is someone like him who is willing to lay down their life in uniform for their brothers and sisters.

What did you expect heading into Afghanistan?

You train as if you’re ready to face every single situation. We knew we would be obligated to carry out any orders. We told our families we were just on guard duty. I didn’t tell my fiancée about the hairy moments, like landing on a minefield under mortar fire, or having a body bag rest at my feet, or flying to pick up multiple casualties.

I accepted the risk that I could get killed. When you sign up, you accept that might be a possibility. But I’m a Christian, and if you think about my faith, Jesus made a sacrifice. So, if, God forbid, I was going to get killed, I would have to be okay with that. But the thing that really was tough for me was always thinking about my family and my fiancée. How would they go on if I died? You realize there is a risk of physical harm. What you don’t realize is the amount of suffering it might cause your loved ones.

Describe the relationships with fellow soldiers.

They were some of the best friends I’ve ever had. Even the guys I didn’t get along with, I knew I could trust with my life. If there was a problem today, they would help me. Here in America, I might meet a fellow soldier at a rugby event, and nobody has to ask any questions. We will suddenly have a deep bond. If you’ve served, you have an understanding.

A line from the St. Crispin’s Day speech in Shakespeare’s “Henry V” best encapsulates the bonds that form between fellow soldiers: “Then will he strip his sleeve and show his scars and say, ‘He who sheds his blood with me shall be my brother.’” Shakespeare means it’s not just how the men earn the scars, but the bonds they made, that they stood their ground, made the sacrifice, had the courage to be there, and tried to do their best in the most horrific circumstances, that allows them to have an enormous sense of pride. It’s really moving.

Describe your most poignant memory from Afghanistan.

My friend, Daryl “Daz” Hickey, a self- educated man who was a grenadier, was killed in action in July 2007. Before he left for the operation in which he would lose his life, he seemed so happy and at peace. I said, “I’ll see you when you get back. Look after yourself.” That was the last I saw of him. A couple of months later, I was patrolling with my platoon, and someone said, “This is where Daz was killed.” Immediately, I thought of a line from Rupert Brooke’s “The Soldier”: “There’s some corner of a foreign field that is forever England. There shall be in that rich earth a richer dust concealed; a dust whom England bore, shaped, made aware.” I thought of this quote because Daryl died so far away from his home country. His death made me incredibly sad. He was one of the most amazing men I have ever met. He reminded me of my granddad. In the face of such a tragic loss I thought, was service worth it? Yes. The reason I joined was because of people like him. Because it shouldn’t just be the special people, the remarkable men, or the boys that have no choice who serve.

What did you learn throughout deployment?

My experience in the army has made me a much better, more well-rounded person. My company commander always said, “Give me solutions, not problems.” That’s the way I look at life now. I don’t blame others or say, “It’s not my fault.” Whenever there’s a challenge, I think, how are we going to solve it? And if I can’t solve it, I’m going to find somebody else who’s going to help me solve it. My experience has made me a much better person because I try to work out how I am going to accomplish things with a greater deal of humility than I had before.

My experiences in the military ignited this idea of how I can be of greater service. That’s why I signed up in the first place, and that’s why I work with theater companies and help other people. I also cherish every day a lot more, and I know to be thankful. And I know never to give up as well. It’s made me a lot better in so many ways.

How was your transition back into civilian life?

I moved to the U.S. immediately after my service. It’s taken a long time to feel at home as a civilian. For a while, I wanted to go back to the military. There was a purpose to everything. Everything was black and white. There was no gray. On the whole, what we were doing was a good thing. I felt guilty for coming back.

And practically speaking, in the U.S., the military pays soldiers’ way through college and offers other benefits, but the British Army does not offer any such compensation. Moreover, I was not able to work until March the following year when all the necessary paperwork in the U.S. had been approved. So, I was an unemployed veteran, newly married, living in a new country with no friends in the area. But in many ways, being in Afghanistan taught me to be strong and overcome challenges as I found a place for myself in the Boston area.

How does firsthand experience in Afghanistan affect your views on the fall of Kabul?

I am incredibly sad about what occurred this past summer. When I came to BB&N, I felt like I had managed to bury the war. And then with the fall of Kabul, a lot of frustration, anger, and pain came flooding back in. I was surprised how badly things had been botched. I went back to thinking we had severely let down another nation. Only this time, maybe it’s not so much the Brits who were responsible. But we failed them again.

How does your experience in the army inform your approach as a teacher?

It makes me feel an enormous sense of gratitude daily and a deep appreciation for life, art, and the ability to work to improve the future of our world. I realize it’s a gift now to have had those experiences empowering me to connect to a deeper sense of what we can achieve as human beings.