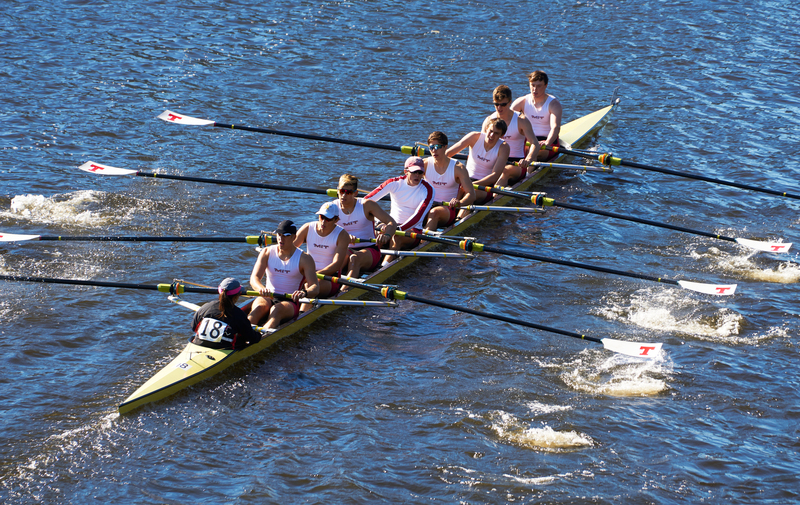 Boys Varsity Crew (BVC) ramped up its physical training to meet the demands of a competitive season—its first since 2019.

“The program is not where it was when I was a freshman,” BVC Co-Captain Charlie Goebel ’22 said, “but we’re getting there. There are kids who are clearly progressing at the same rate they might have in a normal year. Overall, we’re starting to improve at the rate that we need to be.”

Charlie said both interval and long-distance training on the erg and water have built up their physical capacity so that they could race twice in one day, against St. Mary’s and Belmont Hill, an impressive feat given that they did not race at all last year.

BVC Co-Captain Thaddeus Foote ’22 said racing gives the season a purpose, and that without it, the past two seasons had been “abysmal.”

“The whole point is to race. If you have personal goals, like becoming more fit, great. But we do so much hard work, day in and day out, so to have something to show for all your hard work is what I love so much about the races.”

Thaddeus said the team’s lunches during preseason and weekly team dinners during the season have fostered a strong camaraderie which allows rowers to quickly adapt when they are reassigned to a new boat.

“You have to have great chemistry; it’s five people who are working together as one unit,” he said. “You switch around a lot, so you have to get along with everyone, and everyone on the team has to be able to do that.”

Nico Bers ’23 said many of the rowers have found a home in the crew team.

“You get to combine the intense athleticism that comes with rowing at a high level with a nice team,” he said. “And you get a really good sense of belonging someplace in the school.”