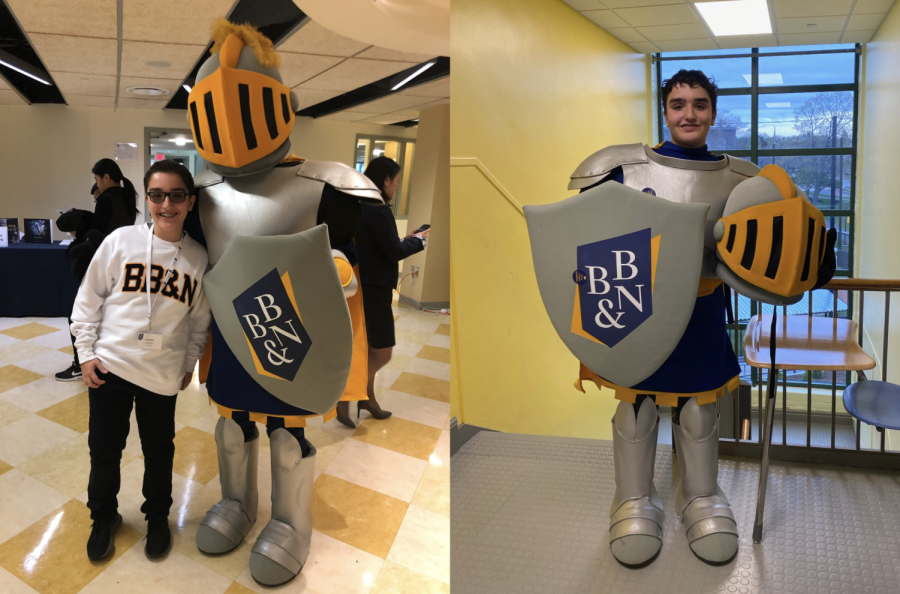 Oh diary, what a day! Dreams do come true, and I’m so glad my dream included hanging out with all my best friends. I’ll end it with this: does it ever drive you crazy just how fast the “Knight” changes?

Behind the black mesh and what felt like 50 pounds of body armor, I saw BB&N’s Class of 2026 mingling for the first time. As I walked through the crowd of students and their families, sudden pats on the back, constant stares, and the occasional calls of “Hey, Bucky!” began.

So, how did I end up here? Well, it all started during one of The Vanguard’s article ideas meetings.

Someone suggested, “What if Rahdin was Bucky?” (Okay, maybe that someone was me!) The Vanguard reached out to some sources, and we discovered we could get access to the costume; this half-joke of an idea turned into a reality.

Fast forward a couple of weeks later to May 3, the day of the annual welcome evening for the incoming freshman class. At 5 p.m., I put on the multi-layered, tight, and very warm Bucky costume. I hadn’t noticed before how elaborate the costume was, complete with gloves, belt, plume, and of course the shield.

I immediately wondered what I had gotten myself into; I was already sweating after just a couple of minutes! But like Superman coming out of a phonebooth, I knew I had a duty to serve.

As I walked into the crowded Nicholas Athletic Center in Bucky’s large boots and with limited visibility through the costume’s head, it was hard not to trip. I was met with high fives and waves from the members of the incoming freshman class, their parents, and other student leaders present that night. Being able to see everyone while nobody could see me on the inside of the costume was surreal. Not even Grade Nine Dean David Strodel knew who was inside the costume at first.

As I wandered around trying to breathe steadily with limited amounts of air, people whispered questions around me: “Who is Bucky?” “Can Bucky see?” “Can Bucky talk?” (For the record, Bucky doesn’t talk—a requirement of the role.) For the next half-hour, I made Bucky known to the crowd, walking up to several families and joining groups of incoming freshmen. I soon found students bonding over Bucky; the Class of 2026’s commuKNIGHTy was growing right before my knight’s visor, and I felt the sacrifice of my physical comfort was worth it. I was happy to help the Class of 2026 integrate a little bit more smoothly into our community.

There were even a few cool dads who went out of their way and left their conversations to give a high five to “the Knight.” I posed for pictures, gave hugs, and nodded my way through the (K)night. I was having so much fun that I lost track of time. Before I knew it, the incoming freshmen split up into groups and followed student leaders into the main Upper School building.

Feeling a little more agile in my armor, I quickly made my way to the entrance by the math wing to prepare to welcome them when they entered through the side door. When each group was settled into their classrooms, I made stops at each one. I wanted all the students to feel a special connection with Bucky.

By this point, I had been wearing the heavy Bucky head for two hours and was parched. I looked around and, seeing no one nearby, I went straight for a water fountain, removed the head, and drank cup after cup of water. It was at this moment Head of School Dr. Jen Price approached me, holding her hand up for a high five.

“Thank you,” she told me. “Believe me, I know how hot it gets in there.” What? Dr. Price had worn the costume too? I felt even more lucky to have been one of the few to have this honor.

The next day at school, Mr. Strodel also expressed to me his appreciation of Bucky’s presence.

I feel proud I was able to make a difference in the incoming class’s first night all together, adding something unique and memorable. I might not have been feeling the coziest myself, but I was able to make the Class of 2026 feel cozy with one another. Although I never figured out who was in that Bucky costume back in 2019 when I was a freshman, (although I now suspect it was Dr. Price), I am grateful that I had the chance to wear it. It is safe to say my appreciation for the importance of Bucky—and the people who brave the heat and discomfort to carry his shield—has risen to a new level.