Event is result of committee, hundreds of volunteers 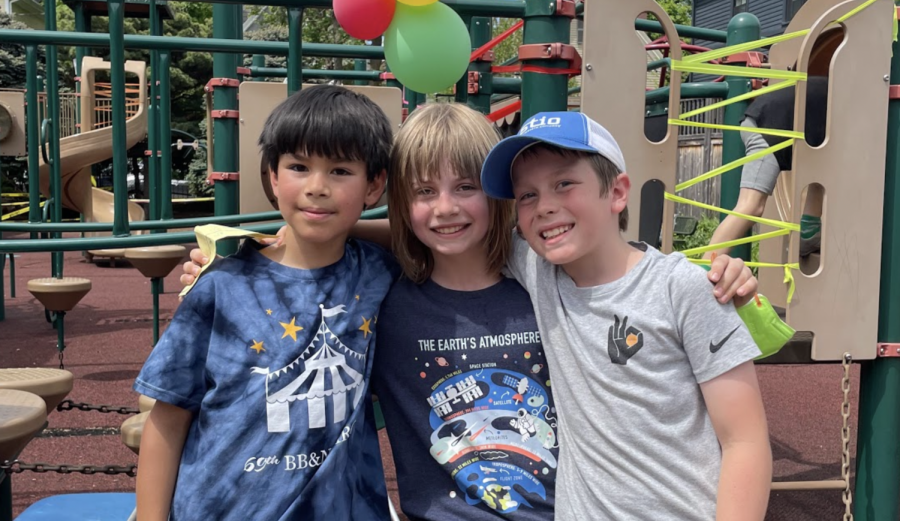 Hundreds of students, parents, and community members entered the Lower School (LS) Campus under an archway of vibrant balloons on Saturday, May 14, at the 69th BB&N Circus, which featured dozens of carnival games, inflatable bouncy houses, and food vendors.

The event, which was given the green light by Head of School Dr. Jennifer Price in February—later than usual due to lingering concerns about COVID— required the planning of four co-chairs, 18 committee members, and the help of upwards of 160 volunteers.

After canceling the 2020 circus just weeks before its intended date and an attempt to have a remote circus in 2021, the committee decided on a theme that captured a new chapter of life after the pandemic: Re-unknighted.

“Themes have been Willy Wonka, Wizard of Oz, Charlotte’s Web—we’ve thrown out so many fun themes in the past. This year, as much as we love the fun themes, the idea that’s been on everybody’s mind is just how fortunate and how lucky we are to all be able to be together once again,” Circus Co-Chair Linda Zarifi P ’32 ’35 said.

While in past years, themes for the circus have been evident through decorations or staff members dressed in costumes such as The Cat in the Hat or Willy Wonka, this year’s theme was more than visual, Ms. Zarifi said.

“The concept is something that can be seen from the colors of the school logo in the balloons at the entryway to something dynamic such as having teachers and parents working together at the cotton candy stand or at the game stand to getting older kids to volunteer for the dunk tank,” she said. “It’s something that plays out on an emotional level as well.”

Although the committee faced obstacles such as less than two months of planning time and increased costs for vendors, they worked to ensure that ticket and food prices did not increase dramatically as community was the priority.

One particular obstacle was finding a petting zoo, as most vendors were booked. The school had to look farther than usual and hired a petting zoo from New Hampshire. Parent Engagement and Interim Communications Manager Isabel Dau highlighted the dedication of the committee to catch up on planning with limited time.

“Behind the scenes, they have been working on this for the past few months and doing their best despite the obstacles,” she said. “The late approval of the circus posed a challenge for the committee. If they had known in the fall that it was 100% sure the circus was going to take place, it would have allowed them to book a lot of their vendors in advance and get a head start on the planning.”

Still, by the date of the circus, the committee had secured the needed volunteers to run games such as football toss and cornhole, rented inflatable Skee-Ball, basketball shots, and bouncy houses, and finalized the food options, which ranged from cotton candy to tacos.

For Circus Co-Chair Irene Harris, the event is a perfect opportunity to incorporate new families into the community, an exchange her family was on the opposite side of in 2019 when her daughter joined the school, she said.

“There’s a big draw because as a new kid, you feel a bit nervous and hesitant about going to a new environment. But if you have a really good first experience like the circus, the child will say ‘Whoa, that’s my school.’”

Marina Kluzak ’27 echoed the idea of seeing the community in a different light from the typical rigid school schedule.

“It’s a really nice community, and everyone gets to be connected while having fun instead of the typical environment of seeing each other in classes.”

Another highlight of the circus was the return of the dunk tank, where students take turns throwing balls at a target in an attempt to dunk sixth graders in a pool of cold water, Samuel Richards ’28 said.

“I’ve been here since beginners, and it’s a rite of passage getting dunked in the dunk tank,” he said. “The more people miss, the more stressful it gets. When you slide in on your own, usually your head can stay above the water, but when you get dunked, you go all the way under the water, and it’s cold.”

Aside from dunking their peers at the dunk tank, students had opportunities to play games and collect stamps before turning them in for prizes at the end of their visits.

Fiyaz Kanji P ’25 said volunteering at the food stand was a way to reconnect with other community members, especially in a time when there’s a new feeling of normalcy.

“It’s been a long two years, and it feels like we’re entering the last phase of the pandemic. I’m excited the school and our kids can try being integrated back into life.”