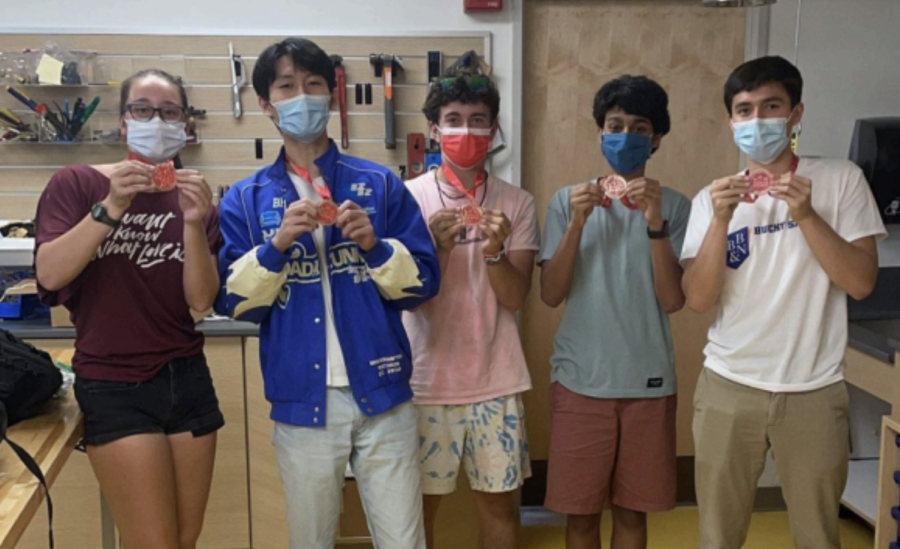 In a series of competitions on November 13 centered on design, aesthetic, and functionality, the Upper School (US) robotics team won three of their six qualifying matches and advanced to the elimination round, giving them the overall ranking of 26th place. The competition, located in Framingham, hosted 42 different schools across New England and held matches for more than six hours.

The matches were played in randomly selected teams of two, called alliances, against another alliance.

Over the course of the day, the team worked in alliances with Moses Brown School, Framingham High School, and four other schools during their matches, which, Co-Captain Daniel Katz ’22 said, provided opportunities for connection.

In the six qualifying matches, the team operated their robot to score points. In between every round, they made little changes to their robot to help prepare for the next match.

“Our team is always fixing and always testing new stuff, even after the final round,” Daniel said.

During the alliance selection, a brief period after the qualifying rounds where teams with the greatest number of points select an alliance from the rest of the teams, the Moses Brown School robotics team chose BB&N’s robotics team, whom they competed alongside in the first match, for their alliance.

Sixteen alliances competed in the final rounds in a bracket system, and the school’s team was eliminated in the first match against the number one seed.

Beginning in September, the 17-student robotics team split into three sub-teams based on experience and spent regular practices building and coding three different robots in preparation for the tournament. All three robots could lift objects using motorized lifts, and the most experienced sub-team’s robot could pick up objects from the ground using a grabber tool.

“Usually, you build a robot in steps—you first build the drivetrain, then you build a lift, then you build a ring picker- upper,” Daniel said. “It was very satisfying seeing the different parts of the robot work, and those are usually the highlights that keep you going throughout the building season.”

In every match, both alliances operated two robots to try and gain the highest score. There were various ways to score points during the competition, including balancing the robots on seesaws as well as picking up small rings placed in the arena and putting them in designated areas with different point values. The alliances chose how they wanted to approach each match with a pre-determined strategy. At the end of the round, points were scored to determine the victorious alliance and added to each team’s record.

The team faced challenges throughout their building process, Daniel said.

“We had to rebuild our robot multiple times from the ground up, but it’s always faster the second time because you know what you did wrong.”

Team Member Darius Sinha ’24 said they also faced last-minute challenges. The robots, comprised mostly of metal parts, each had two protruding rods attached to motors that functioned as lifts, Darius said, and on one of the robots, the rods were a quarter of an inch too long to meet the competition’s size requirements.

“We had found this out the previous night when we were preparing for the competition at school, and so we all went home nervous for the coming day when we had to fix it under a time crunch.”

Ultimately, the team filed down the sides of the robot and passed inspection. Throughout the building season, Co-Captain Elaine Mo ’22 said, she was proud the team did a good job balancing teamwork, productivity, and desire to win.

“It’s less about really working to win the competition and more about experimenting with design and working on the robot,” she said.

US Mathematics and Computer Science Teacher and Robotics Team Faculty Advisor Joe Cyr said the team’s work during practice and at the competition impressed him.

“They’re a great bunch of kids,” he said. “They come up with some pretty clever ways to work with their robots. In between every round, they were frantically trying to adjust and fix things to get them working—things that didn’t work right the first time that they wanted to make better.”

Dr. Cyr said students with fewer years of experience on the team competed against the same level of skill as those with more experience. “They fought hard,” he said. “They were up against some pretty stiff competition. I was proud of them for putting up that fight.”

Co-Captain Dan Bi ’22 said he enjoys the collaborative and social aspect of robotics practices and competitions.

“You get to talk to your friends and work on the robot at the same time, so that’s pretty great,” he said. “Just in general, everyone’s really friendly. The other teams were super nice, and it was awesome to talk to them.”

The team’s overall goal, Dan said, is to qualify for the VEX Robotics World Championship, an international competition in May for which they qualified in 2019. Only the top eight regional teams enter the championship, and the team hopes to succeed in the next few tournaments this year, the next in February, to make it to Worlds.