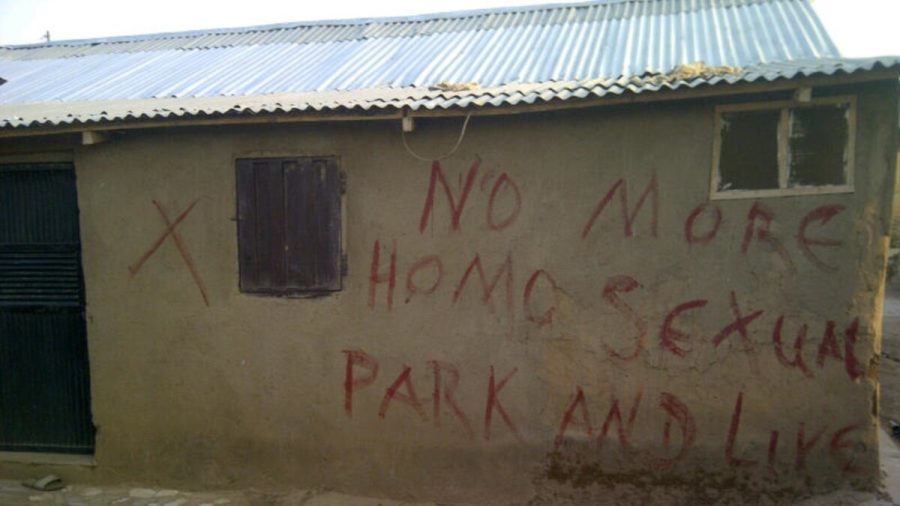 On October 9, 1996, The Vanguard released Volume 25, No. 4, a page-turner and time capsule that featured an interview with Former President Bill Clinton, a list of Knights football victories, the resignation of student body co-presidents, and a passionate column about lactose intolerance. But tucked just beneath the headlines, starting on the very bottom of page one, is a harrowing title all the same: “Homophobic graffiti found.”

The homophobic graffiti in question was a swastika and message reading “Death to the Faggots of SEADS” scrawled on the stall wall of the boys’ bathroom. Students for Education about Diverse Sexuality (SEADS) was the predecessor of the current Gender and Sexuality Alliance (GSA). This hate message appeared on the day of the Activities Fair at which GSA Co-Presidents Geoffrey Palmer ’98 and Rachel Sommer-Hays ’99 were hosting a sponsored table and making routine recruiting announcements for prospective members of the club.

It sounds like public, especially subtle, homophobia wasn’t entirely uncommon at BB&N at the time. In the original 1996 article, Geoffrey said two freshmen had been pointing at the GSA table and laughing.

“It was pretty obvious what they thought,” he had said. “They assumed everyone there was gay.”

These incidents shocked the school community.

“I am very disturbed to hear that we had this kind of graffiti, particularly in a community that is as open as ours,”

Then Head of School Mary Newmann said. Morgan Mead, Dean of Students at the time and openly gay himself, seemed unsurprised:

“I think obviously there are people who are uncomfortable with homosexuality [at school],” adding, “the issue is still there.”

I have to give props to the student body organizations and administration for how they handled the incident in 1996. The student body took charge in the response.

Various club leaders and those most affected spoke at a dedicated meeting open to students and faculty. The administration and students worked closely to commission small discussion groups about homosexuality at the school to prevent any reoccurrences and promote diversity and acceptance.

Teachers were also encouraged to discuss the moral implications of the graffiti in class. I am impressed and proud to know that our school was looking out for one another 25 years ago just as they are today.

But memory of the incident seems to have faded as quickly as the derogatory message was removed.

I recently contacted Geoffrey, now a published playwright, novelist, and essayist in the Boston area, for his thoughts nearly three decades on.

“If you hadn’t emailed me, I’m not sure I would have remembered it,” Geoffrey wrote to me, “which seems strange because it was such a strange and powerful moment. But the words [on the stall] I do remember. Somebody wanted me dead because I wanted more equality, less hate, more love in the world. [The message] was so permanent, so public.”

Despite the initial shock, Geoffrey “did not actually feel threatened,” he told me; he primarily felt sadness for our community. “They wanted to hurt us, psychologically. This only reinforced the need for a group like [GSA].”

I asked Geoffrey about homophobia at the school when he was a student. As he described it, homophobia was limited then to the pejorative usage of words like “gay,” as well as casual homophobia persistent in the “jock” crowd.

“There were not very many openly gay people at the school,” he said, which perhaps contributed to the few targeted incidents of the time, but “it wasn’t easy to be out, for sure.”

My experience as a transgender student at our school only dimly echoes what Geoffrey described. I have, over the course of my seven years at the school, been called slurs behind my back and under the breath of passersby. I have, too, been mocked, teased, and made to feel lesser than for my feminine traits and then for being trans. But these experiences have truly been far and few between. In the words of the late Ms. Newmann, “it takes one person in a school of 400 students to do that.”

Let us take the one-in-400 as a reminder of what we are unfortunately capable of and the 399 as a declaration of all that we proudly stand for. Keep making the world a more accepting place. Keep demonstrating the warmth which you have shown me, and keep loving those who seem different from you so that an incident like the one in 1996 can never happen again.