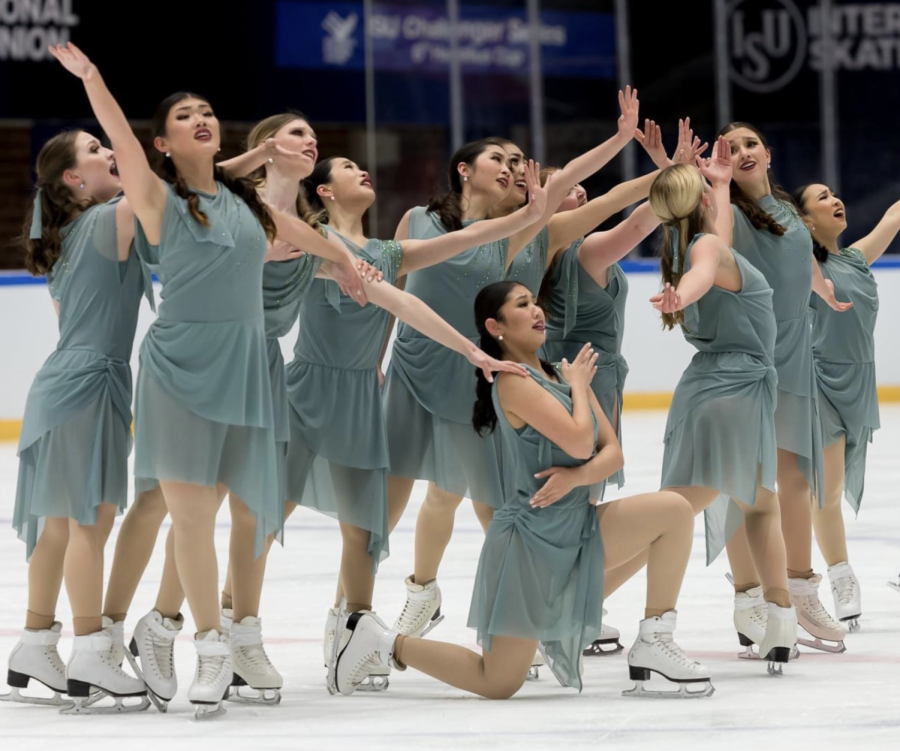 The Hevelius Cup, an international synchronized skating competition hosted in Gdansk, Poland, marked the return to skating in front of an audience for Katie Chen ’22, who twirled and glided across the ice on January 5 and 6 with 15 team members.

“Having an audience makes skating so much more lively,” she said. “It doesn’t look the same on video ever because there’s not as much life to the expression we put out there. The return back to actual arenas is such a nice thing to have.”

Following a season of only virtual competitions, Katie competed in the California Cup, the international selection pool qualifier, this past November as part of the Lexettes, her junior skating team at the Hayden Synchronized Skating Teams in Lexington, MA. The Lexettes placed third overall, received a bronze medal, and were named Team USA for the Hevelius Cup.

Since the California Cup was the Lexette’s first competition since the pandemic began, Katie said the team went in without expectations, but their “rigorous training” and the strength of their routine gave them a good sense that they would be considered within the International Selection Pool. However, Katie said being named to Team USA and getting to go to Poland meant a lot to her.

“I had never competed internationally before, and it was an amazing feat for me,” she said. “We got to see so many other countries skate and so many different styles. That was a really great learning experience for me.”

Following months of three-hour practices four times a week, the Lexettes felt prepared for the event, Katie said. After they arrived
in Poland, though, jet lag and the intense training timeline proved to be a challenge for Katie during practices, she said. Two hours after the team’s arrival in Poland on January 1, the Lexettes took the ice at Haga Oliva, the arena where the competition was held, and began practicing. The following three days before the competition, the skaters practiced for up to five hours a day.

“Being able to train there was super nice,” Katie said. “We trained in the official arena where we were gonna compete, so by the time we actually competed it felt comfortable to compete there.”

The Lexettes completed two different routines at internationals—a “confident piece” to a Latvian song by Tautumeitas called “Raganu Nakts,” on January 5 and a routine to Lauren Daigle’s “Rescue” on January 6.

Katie said she especially connected with their performance of “Rescue.”

“’Rescue’ is about the journey of feeling lost and alone, hopeful and longing and finding each other towards the end; we each take on our own personal stories of grief, loss, and healing, so our emotions are genuine and honest when we skate,” she said.

“We definitely as a team felt like this competition could have gone a lot better,” Katie said.

“Both of our programs definitely were not our strongest, but we talked about a lot with our coaches and what we’re going to do next moving forward into nationals, the 2022 U.S. Synchronized Skating Championships at which 13 teams compete. I think all of us were just really happy that we all got to compete at our first international.”

Anna Chong, a member of the Lexettes and a junior at Bedford High School, said she felt slightly disappointed with the team’s outcome considering the nature of their practices beforehand.

“Those four practices we had in Poland before competing were probably the best practices we’ve ever had,” Anna said. “So, going
into the competition, we had really high hopes of placing high.”

Once the competition ended, before their flight back home, the Lexettes all took video-proctored rapid antigen COVID tests, on which three team members tested positive before their departure.

Anna said COVID added stress to the team’s trip but also worked as a bonding force for the team. “When people tested positive, it was definitely a very surreal experience, and it brought us together as a team knowing that we had to be understanding of what people were going through,” she said.

Anna and Katie have been skating with one another for the past seven years. With college on the horizon, Anna said, skating next year will be “different not having Katie there.”

“Katie is one of my best friends,” she said. “Especially with skating taking up all our time after school, we’ve formed a special bond because you can relate so much to each other’s lives.”

Anji Friedbauer ’22, one of Katie’s friends, said she’s impressed with Katie’s dedication to skating. “It’s pretty inspiring,” she said. “Skating sucks up so much of her time. I could never imagine myself committing to anything at that level and doing it so intensely and still being able to keep up with everything else. It’s really impressive.”