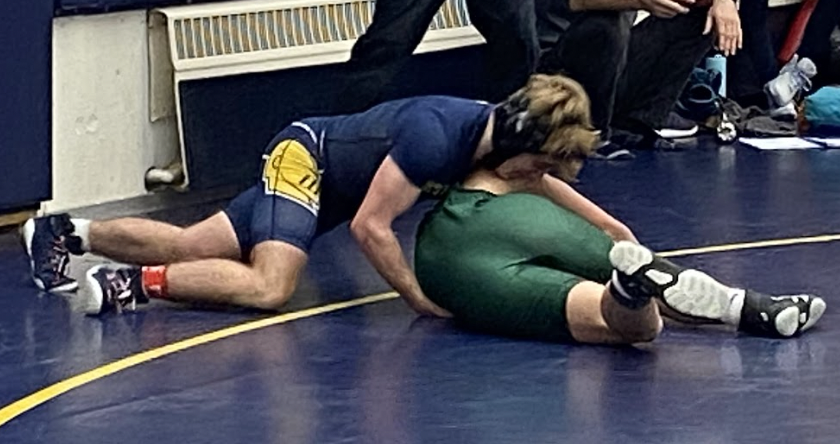 Clad in singlets and face masks, members of the wrestling team returned to the mats this winter.

Like all winter athletes, all wrestlers who attend schools in the Independent School League (ISL) must be fully vaccinated to compete. In addition to the vaccination requirement, wrestlers practice with masks on, and, before Winter Break, it was mandatory for wrestlers to take a rapid COVID test 24 hours before each meet. As of January 3, wrestlers are required to take a PCR test every Monday at the school and have to take rapid tests before a match if the school they are competing against requires it within their COVID policy.

The ISL had not made any final decisions regarding wrestling until the start of the season.

“A lot of the season was up in the air,” Wrestling Coach Henry Kasdon ’98 said. “Once we actually started wrestling with full contact on the first day of practice, I actually started to believe we were going to get through it.”

Despite the COVID protocol, Coach Kasdon said, he’s enjoyed seeing the wrestlers come together and compete.

“The energy in the room for the first meet of the season was amazing,” he said. “This was the first time many of us have wrestled in almost two years. Just how wide that room was with spectators, athletes, referees, and coaches, all so happy to be a part of this sport.”

Fin Crafter ’23, a first-year wrestler on the team, said they are “very unified.”

“Matches are very energetic, and a lot of support comes from the team whether we win or lose,” Fin said. “We have fun but also get a lot of work done and drain the energy from one another during drills and practices.”

Charlie Goebel ’22, who’s been wrestling since sophomore year, said he likes watching his teammates rise up and bond with one another.

“Seeing people’s first wins is always fun,” he said. “As a senior, seeing a bunch of new kids wrestling and supporting each other while learning about a sport they love to play has been nice.”

Charlie said COVID risk is still a concern, though.

“It’s been in the back of our mind because we know that if we do test positive, then that upcoming meet will likely be canceled for us,” he said. “If one of us is testing positive after wrestling with each other, we’re likely going to all test positive.”

The wrestlers have had to adapt to complications like upholding their focus when their mask slips,

“The greatest challenge is wearing a mask in a match,” he said. “Already matches are a physical grind, but wearing a mask makes it much more difficult. They can fall off, which makes us stop the match, and when they become sweaty they stick to your face which makes it hard to breath.”