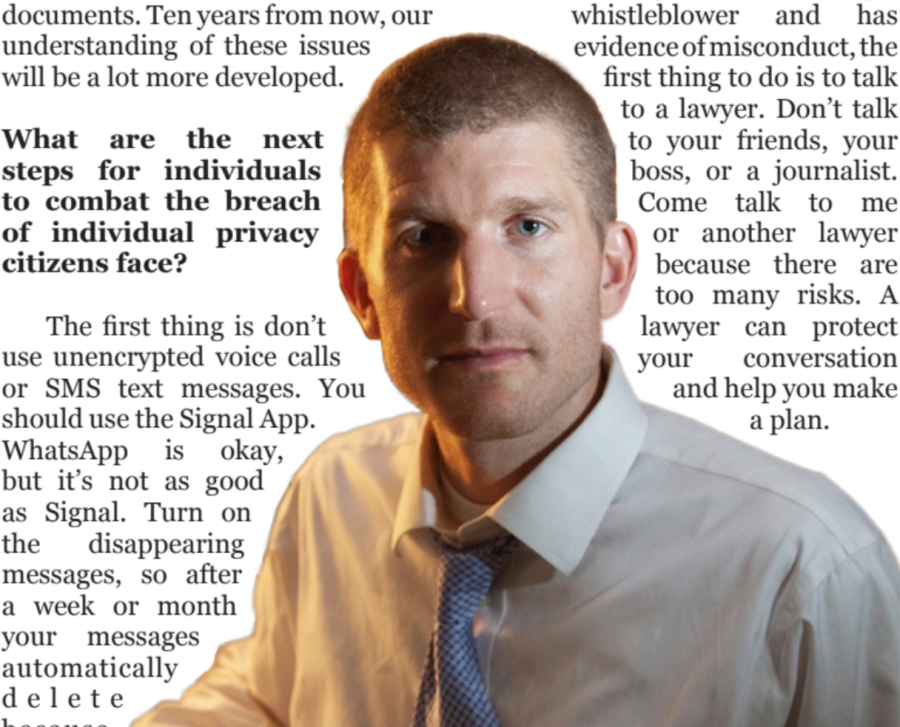 Tell us about Whistleblower Aid and its purpose.

I had been a whistleblower myself back in 2014 while I was working at the State Department and had a top-secret clearance. For the whole year after the Snowden disclosures—where IT consultant Edward Snowden, who worked for the National Security Agency under contract, revealed secret information regarding U.S. intelligence operations and abuses on American civilians and around the globe—part of my job was to respond to them in various diplomatic forums. During that period, there hadn’t been a single article on the main legal authority that the National Security Agency uses to collect Americans’ data, Executive Order 12333, so I wanted to become a whistleblower about it. I thought and still think that it violates our Fourth Amendment rights in the Constitution. I didn’t want to go to jail or flee, so I went through the lawful disclosure process, and during that process, I realized there weren’t enough resources for whistleblowers out there. In 2017, I decided this was something I wanted to spend my time on.

We represented multiple officials with evidence that President Trump’s nominees had broken the law and were able to block some nominations in the U.S. Senate. But we’re non-partisan, so we’ve represented whistleblowers reporting conduct by Democratic officials as well. We’ve been involved in a number of prominent cases in the last five years.

What does it actually look like to be a whistleblower?

Every whistleblower case is different. We’ve done cases involving classified information to other kinds of civil servant cases to private sector cases like Facebook to universities like Massachusetts Institute of Technology (MIT) Media Lab, where we represented Signe Swenson, whose disclosures exposed Jeffrey Epstein’s relationship to MIT. The rules are always different, but the strategic factors are almost always the same.

There are two recommended ways to be a whistleblower. One is you make an anonymous disclosure, and no one ever learns who you are. Option number two is to be very public about who you are and try to build support from the public. That’s very scary because you’re putting your name out there and taking a big risk. Multiple times we have had to hire armed guards to protect our clients or lawyers around the clock in their homes.

When I was a whistleblower, I decided I was going to follow the lawful process. I first made disclosures to the State Department Inspector General, the [National Security Agency,] Inspector General, the house in the Senate Intelligence Committees on Capitol Hill, and then I wrote an article by hand that I submitted for pre-publication review to make sure it had no classified information, and then it was published in The Washington Post. Ultimately, instead of attacking me, the government complimented me. They were definitely not happy, but because I had followed the rules, they couldn’t criticize me. You can put the perpetrator in a bind where it becomes difficult for them to criticize you, and I think we’re successfully able to do that with Ms. Haugen’s case. Facebook, now Meta, has not tried to sue her. I think that that’s a testament to her courage and to our hard work to build a lawful disclosure path for her.

What’s next for the case and for Facebook? What are the potential implications from the case’s outcome?

I don’t know what’s going to happen. Consumer protection is handled on the federal level by the Federal Trade Commission (FTC) and at the state level by various attorneys generals for all 50 states. The FTC or the state agencies could bring an action against Facebook saying that they either negligently or deliberately distributed products that they knew harmed teenagers or some other vulnerable group.

Congress or the European Union or other countries could pass laws that would start regulating social media. From a legal perspective, both enforcement actions and legislation are possibilities, but from a societal perspective, the internet is a weird thing. There’s a whole bunch of things about the internet that have never been possible before in the history of humanity. In fact, my disclosure in 2014 was about one of those things, which is that certain government entities and corporations essentially have a goal of collecting detailed profile information of every person on earth.

I’m not an expert on social media, but the reason that platforms are so compelling is because they tap into the most basic psychological needs for affirmation and status. Teenagers want to have friends and they want to be liked. These platforms are very enticing and addictive. People have made the comparison to tobacco. Kids would smoke to look cool, and now they want the likes on Insta. People are still figuring it out, even with the data in [Ms. Haugen’s] documents. Ten years from now, our understanding of these issues will be a lot more developed.

What are the next steps for individuals to combat the breach of individual privacy citizens face?

The first thing is don’t use unencrypted voice calls or SMS text messages. You should use the Signal App. WhatsApp is okay, but it’s not as good as Signal. Turn on the disappearing messages, so after a week or month your messages automatically delete because five years from now, everyone in their early 20s is like ‘Wow, I did some really embarrassing things when I was a teenager.’ You just don’t want that stuff laying around.

Tell us a little bit about your time at BB&N.

I made wonderful friends who are still some of my best friends who I talk to and see all the time. That’s probably the most important thing. Academically, it was very intense. The good part of that was that I was well prepared for college and ahead of the curve. I didn’t feel as supported on an emotional level, however. That part was hard for me. Yet, I loved it: I had great teachers; I had great friends; I was on the ski team; I played baseball; I played soccer.

It wasn’t until after college that I figured out what I wanted to do with my career. At BB&N, I had no idea what I wanted to do. I went to Duke University and thought I was going to be a scientist. Science was intellectually stimulating, but it didn’t feel connected enough to people. So, I became a lawyer.

What is the most important thing readers should know?

If you or someone you know is thinking about becoming a whistleblower and has evidence of misconduct, the first thing to do is to talk to a lawyer. Don’t talk to your friends, your boss, or a journalist. Come talk to me or another lawyer because there are too many risks. A lawyer can protect your conversation and help you make a plan.