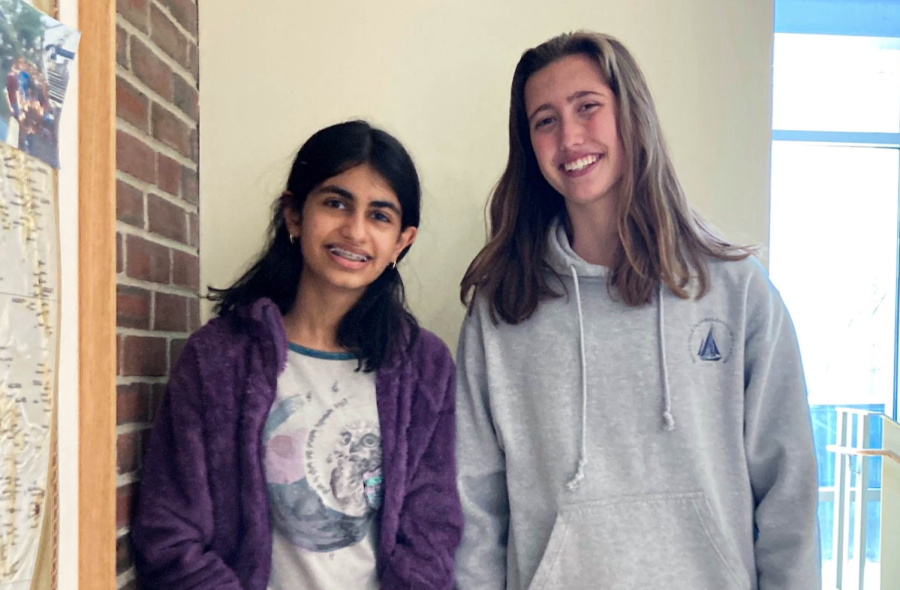 Every Wednesday after school this winter, nine Upper School (US) girls shuttled to the Lower School (LS), awaited by the third- and fourth-grade girls. The US girls went into the Markham Building at the LS to teach math games, help with homework, and assist with prior math competition problems. These afternoons marked the beginning of Girls x Math at the school. This winter functioned as a learning experience for the LS girls and marked an exercise in community building between campuses.

These Wednesdays were made possible through the work of Mika Higgins ’24 and Nina Khera ’23, the two leaders in the effort to turn the national organization of Girls x Math into a program at their school. Girls x Math is a nonprofit mentorship program aimed at fostering a love of math in third and fourth-grade girls.

Founder of Girls x Math and a senior at the Trinity School in New York City, Maia Posternack is a passionate math scholar who set a goal of engaging more girls in math at a young age. According to the Girls x Math website, Maia was curious why so many girls at her school lost interest in math as they got older and believed the best way to keep girls interested was to cultivate curiosity beginning in elementary school.

US Math Department Head Chip Rollinson said he learned about the nonprofit in an email from Maia. Mr. Rollinson then sent out a What’s Happening email asking US girls if they were interested in the program, and 22 students volunteered. After receiving a follow-up email from Mr. Rollinson, Mika and Nina stepped forward as student leaders of the program. Mr. Rollinson continued to work on logistics with After School Lead Teacher Janine Cozier at the LS, he said. They were able to kick off the program in January.

Before the program began, Nina and Mika met with Maia to learn more about Girls x Math’s mission and its curriculum. As Mika and Nina began their first sessions at the LS, the effect they had on the LS girls became clear, Nina said. Nina enjoyed teaching the kids, and found she got a lot out of the program. She brought candy to help motivate the girls but said they were also interested in the math.

“I really enjoy working with the kids and seeing girls get excited about math. It makes me really excited for the[ir] future,” Nina said. “[The meetings] were [fun for] them because they enjoyed the math problems and getting candy, and it’s important to us because we love getting them interested in math and hopefully creating lifelong passions.”

While the volunteers wanted to show the LS girls how engaging math could be, they also wanted the girls to see that math can be fun, Mika said. To help the girls with multiplication, the volunteers showed them how to play a game of Connect Four where they rolled dice and multiplied numbers to access spaces on the board. The third- and fourth-grade girls were enthusiastic about new math concepts, Mika said.

“It was really refreshing to listen to the girls talk about how they love to do addition or how much fun they have learning a new method for subtraction,” Mika said.

Volunteer Geneva Burkitt ’24 found Girls x Math to be a transformative experience, as she saw how infectious the passion for math could be.

“The program description in Mr. Rollinson’s email originally drew me in because I like spending time with kids, and I can definitely teach simple math,” Geneva said. Throughout the winter, Geneva began to understand the value of her relationships with the kids and was encouraged to see that math was more fun for them than it had been for her as a young girl.

“I liked seeing the kids because they ended up actually liking to see me,” Geneva said. “They were excited when I would come every Wednesday. I also didn’t expect them to enjoy the hour sessions as much as they did. Every time we would meet, they would come really excited, which I didn’t expect, because I didn’t like math that much when I was younger. I liked that I was helping them have fun,” Geneva said.

Mika had a similar experience, noting that one of the LS and US girls’ favorite aspects of the program was getting to hear about each other’s lives, she said. The connections formed across campuses became a meaningful part of the girls’ experience, she said.

“I love hearing about my mentees’ days, what books they read, what sports they play, and so on,” Mika said.

Wednesday afternoons during the winter season became a cherished experience for both the volunteers and the kids involved, Mika said. Because of its success, Girls x Math will continue at the LS next winter with the hope for even more volunteers and participants, Mika said.