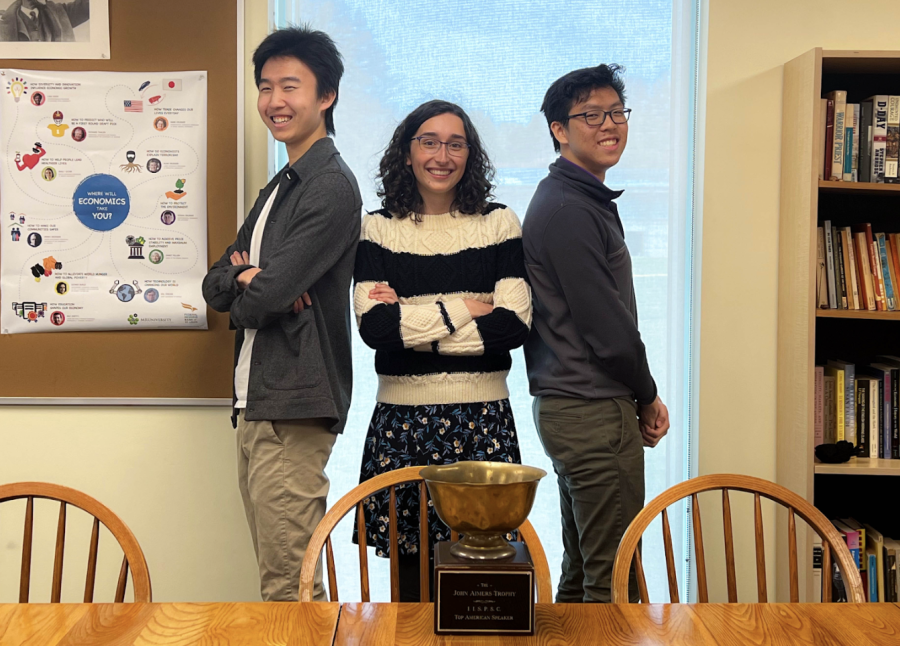 “First!” the Upper School (US) shouted in unison at assembly on March 28, responding to US Debate Coach and History Teacher Steele Sternberg’s question: “How was Julia Shephard ranked at Internationals?” Six weeks later, Julia Shephard ’22 placed second overall at the World Individual Debating and Public Speaking Championships (Worlds) as the only American in the top 30.

Witnessing debators Daniel Wang ’22, Julia, and Tim Guan ’23 support each other with a positive conversation before a debate or a consoling hug after a less-than-stellar result taught Mr. Sternberg how well the debaters worked together, he said.

“They really behaved like a team, not just a group of students doing a Zoom event for some random prize,” Mr. Sternberg said.

From March 4 to 6, Julia, Daniel, and Tim competed virtually at the International Independent Schools Public Speaking Competition (Internationals), an annual competition for high school debate teams in Canada and the United States. At Internationals, Julia placed first in impromptu speaking, where competitors speak for three to five minutes on either a concrete or abstract noun or a common phrase; first in after-dinner speaking, where competitors give a five- to seven-minute satirical speech; and first overall. Daniel placed first in extemporaneous speaking—an event he had never competed in before—where competitors speak on a political or social topic for six minutes with 30 minutes of preparation. Daniel and Tim placed first in cross-examination debate, where competitors prepare a side of a fully-researched debate topic: Should countries pay monetary reparations to marginalized groups?

Daniel and Julia qualified for Worlds–a virtual competition with 115 participants representing 30 countries with preliminary rounds and final rounds taking place from April 9 to 10 and April 15 to 16, respectively. At Worlds, Daniel was a finalist in persuasive speaking and parliamentary debate. Along with placing second overall, Julia was a finalist in impromptu speaking and interpretative reading and placed first overall and second overall in after-dinner and parliamentary debate, respectively. Former Debate Coach Sarah Getchell and current Debate

Coaches Zoe Balaconis and Steele Sternberg chose Daniel, Julia, and Tim to compete at Internationals from a pool of 15 US debaters after holding tryouts.

Julia prepared for the debating and impromptu speaking events through what she calls “debate calisthenics,” which consisted of two impromptu speeches a day and two full debates a week.

“I kept losing my voice,” Julia said about her preparation. “I talked to myself on Photo Booth or Zoom to mirror the experience of competing online.” Julia generated her impromptu ideas from constantly texting her friends for a concrete noun, an abstract noun, and a quote. Her three impromptu speeches at Worlds were about tears, disgust, and the internet.

In Julia’s after-dinner speech, she played the role of a suburban housewife promoting her book “The Great Red Suburb in the Sky: Preparing for Life on Mars.”

“My character operated under the assumption that working to address climate change was hopeless, but the satire in the speech was that we shouldn’t be considering things like moving to space,” she said. “Rather, we should address the root of the problem.”

In the hours leading up to the tournament, Julia decided that Daniel, Tim, and she should watch American Olympic ice skater Nathan Chen’s 2022 Beijing Olympic performance for inspiration because he had failed in previous tournaments but never gave up, she said.

“[It was] the most inspiring video [I have] ever seen. The pure joy came from knowing that Nathan Chen does so much work and then he goes and wins,” Julia said.

After months of intense training, Julia reflected on winning the entire tournament.

“It was very emotional, actually,” Julia said. “Running around afterwards screaming ‘we are Nathan Chen’ was very nice.”

Before Julia, the highest overall placement at Worlds from US Speech and Debate was Adam Levin ’19, who placed fifth. Julia had qualified for and competed in Worlds virtually in 2020. She went into the 2022 tournament with no concrete expectations other than trying to meet new people, she said.

“I would message fellow debaters after their event ‘great job!’ and we would start a conversation over Zoom chat, which would lead to exchanging contact info and making new friends,” Julia said. “It made my experience the second time around much more enjoyable.”

Julia will attend Harvard University this fall and before Internationals, was reconsidering her future in debate. “Debate has been something I loved since freshman year. It’s been really, really fun. But I had been thinking about giving it up after high school, because there are different things to do in college,” she said. “And then during the day of debate at finals when I did all my event—impromptu, after dinner, interpretive reading, and parliamentary debate—I was hopping from one event to another, and that was the most fun I’ve had in such a long time.”

Julia plans on trying out for the debate team at Harvard, but she’s had her share of winning, so that’s not going to be what motivates her in the future, she said.

“Debate people are some of the coolest people out there. So if there are more people like those at Worlds to hang out with in the future, I’d like to meet them,” Julia said.

Approaching Internationals, Daniel and Tim spent a month preparing for their negative cross-examination case through unconventional research because their topic’s position did not oppose reparations in general but called for them in a different form, Daniel said.

“We were hoping to catch people off guard,” Daniel said, “and it very much worked.”

Tim described the week leading up to his three competitions as very stressful. Tim was required to submit a video of his after-
dinner speech a week before the beginning of tournament, which happened to be the day after his junior-year U.S. History research paper was due. His after-dinner speech was on the topic of Asian hate crimes, specifically performative activism.

In his first impromptu speech, Tim spoke about the word ‘laughter’ with a focus on the science of laughter and how the human brain works. His second impromptu speech centered around the saying ‘it takes a thousand voices to tell a single story,’ during which he spoke about a broad range of topics from compassion to vaccine hesitancy.

When witnessing his fellow debaters—Daniel and Julia— compete in Worlds, Tim was incredibly proud, as he had watched all the work they both put in for months beforehand, he said.

“Three times I got reports of their advancements in Worlds, and I would immediately ecstatically message them with words of encouragement,” Tim said.