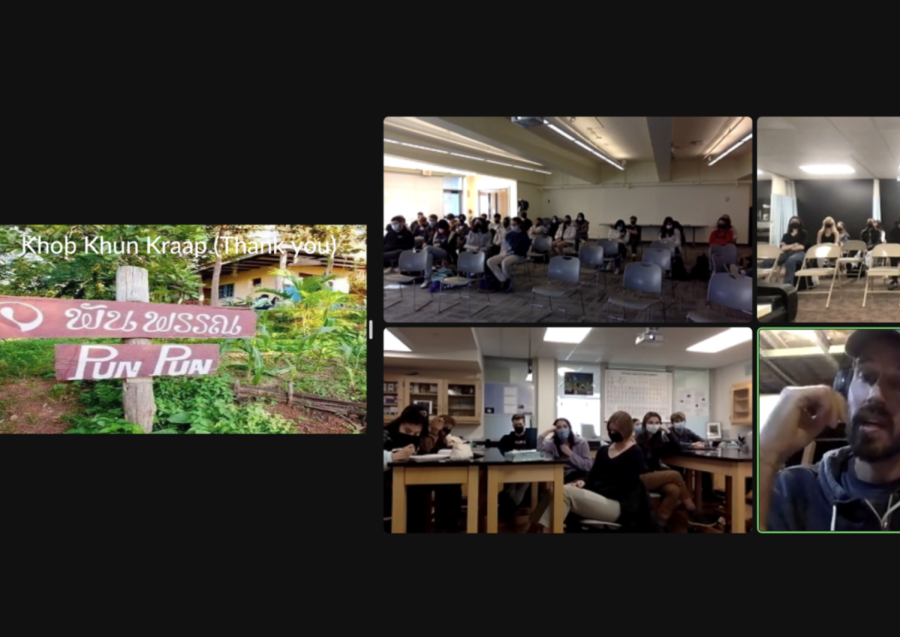 When Where There Be Dragons (WTBD) Field Instructor Greg Pettys met with Upper School classes over Zoom on January 18, he described seed saving, wildlife conservation, and sustainability at the Pun Pun Center for Self-Reliance in Thailand. Students gained the opportunity to hear from Mr. Pettys through the Global Speaker Series, a virtual discussion board that brings awareness to cultures and lifestyles around the world.

In the Speaker Series, Mr. Pettys highlighted agricultural issues faced by farmers in Thailand and potential solutions for such issues. Students from Advanced Placement (AP) Macroeconomics, AP Human Geography, Experimental Biology, and Current Topics and Research listened to his insights, then talked through compelling questions that arose from the discussion.

AP Macroeconomics and Experimental Biology student Oscar Caparo ’22 said he learned about important details and examples relating to the links between agriculture and the economy, like the chemical damage done to the environment by the agricultural technology company Monsanto.

“The highlight of the event was definitely the energy that the speaker brought while speaking about his way of life,” he said. “I was able to see firsthand why seeds were so important, and it gave me an appreciation for the lives of the people affected by companies such as Monsanto.”

WTBD, a program with a large array of educators from different backgrounds and cultures, organizes its teachers to speak in classrooms around the United States. The topics that the program covers range from climate change to advocacy through stories. WTBD aims to break down cultural barriers and create cohesion between communities worldwide, according to their website.

History and Social Sciences and AP Macroeconomics Teacher Farah DiPasquale said the idea to host the Speaker Series came organically through observations made by students and teachers.

“We have a lot of overlapping students in our classes, so we thought that it would be really great if we could explore a topic from our respective disciplines and then have the students come together and discuss the issue,” she said.

The Pun Pun Center for Self-Reliance is an organic farm in northern Thailand that is home to a community of 20 people. These people share almost every aspect of their lives with one another, whether it be while farming, raising children, or learning with one another. The members of the Pun Pun community believe in hands-on learning, and they tackle issues or problems in a combined effort, Mr. Pettys said. Originally from America, he has been living there for 10 years.

Though agriculture was the main focus of the discussion, Mr. Pettys also explored music, food, and other essential aspects of life at the Pun Pun Center. US History and Social Sciences and AP Human Geography Teacher Steele Sternberg said his students gained insight into the varying ways that people choose to live their lives.

“The highlight, for me, was when it became clear just how radical the speaker’s departure from western consumerist society truly was,” he said. “Greg’s decision to live at Pun Pun also meant a decision to not regularly use money, to truly depend on others in his community for his basic needs, and to limit his moments of entertainment and relaxation to that which was local to him. I was happy that my students, who live such modern lives very much entrenched in western society and western culture, had an opportunity to see a different way of living.”

AP Human Geography student Sammy Krem ’22 said he appreciated the opportunity to hear about different parts of the world from the speakers.

“I’m really glad that a system that expresses sentiments from different parts of the world exists,” he said. “The speaker talked about the cultural significance of respecting your elders through music, which I found very interesting.”

Going forward, more US students may benefit from the speaker series. US History and Social Sciences Teacher Matt Turnbull and US Science Teacher Melissa Courtemanche, who co-teach Environmental Studies, hope to have an educator talk to their students sometime in this trimester, Mr. Turnbull said.

“For us, having someone who can talk about specific case studies of the cultural side of climate change that we don’t cover in class will be a great way to supplement topics that we have been working on,” he said.

In the coming years, the school plans to organize Global Speaker Series for students in person. Classes such as Environmental Studies, Chemistry, and Global History 1 will receive opportunities to hear from speakers discussing topics such as climate change, Buddhism, and the accessibility of drinking water.