All hands on deck 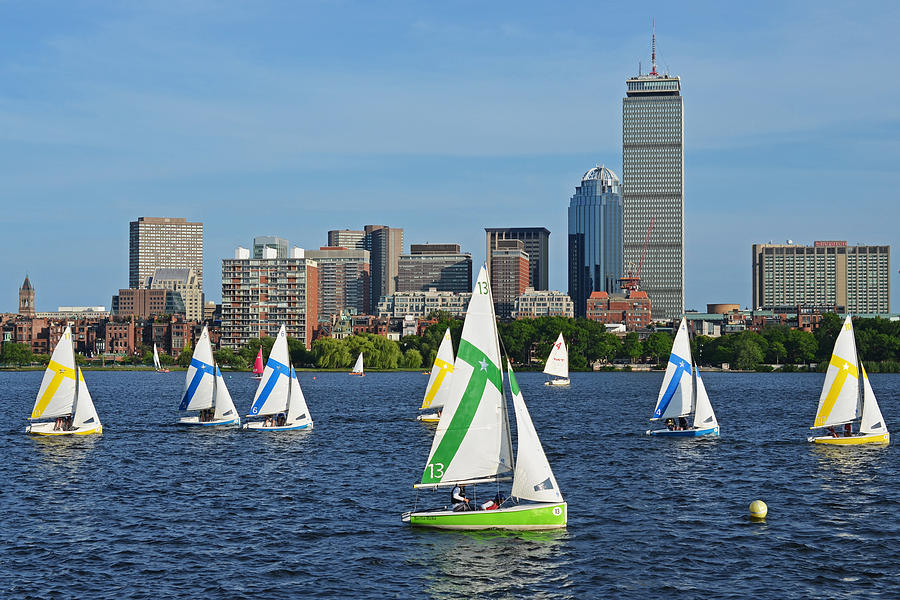 I love to tell stories, and my most entertaining stories take place in boats or, more often, out of them. These sailing stories often end with “and that’s how I found myself treading water in thirty-knot winds in the [Boston Harbor/Charles River/dead center of a lake/wherever].”

I love entertaining and seeing the expectant faces as I build tension by talking about being stuck underneath an overturned boat fighting for air. (Why do people get so nervous when I talk about almost drowning? Clearly, I turn out okay.)

Great sailing stories have danger peeking around corners, wild rescues, and high winds. In reality, however, my favorite parts of sailing are far less suspenseful.

Sailing is a two-person sport—a synchronized, agile dance to get the boat slicing through the water. (Actually, I take that back: I’m a horrific dancer and a decent sailor.)

Sailors have to communicate, engage harmonized muscles to pull ropes, turn tightly, and balance the boat. Sailing is a case study on how humans work together. The way I see it, the central dogma of sailing is that the behavior of the boat reveals the teamwork of its sailors.

For a racing boat, cooperation is paramount. Having two great sailors in one boat means nothing if they refuse to communicate. I’ve sailed with people whose egos trump their boatmanship. You can see tension between sailors in the luff of a sail and see miscommunication in the wobble of an uncontrolled tiller.

To prevent this, I try to apply behavioral science to the sport. Malcolm Gladwell, in “Outliers,” wrote anecdotes about the sociology of teamwork: how power structures in airplane cockpits supersede communication and lead to fatal crashes. If a copilot is afraid to tell the pilot they’re doing something wrong, the problem doesn’t get fixed.

The same thing (albeit with less disastrous consequences) can happen in the water of the Boston Harbor. After losing one scrimmage race by a hair, I realized I’d forgotten to tighten the vang on a downwind stretch. (If that sounded like nonsense to you, it’s a minor step but might have made the boat faster by just enough.) I turned toward my teammate and asked if she noticed what I’d done wrong yet not pointed it out. She shrugged a small “yes” and despite myself, I asked, “Do I intimidate you or something?” She laughed and said no. I wondered if she was entirely telling the truth and made her agree to tell me next time.

Another thing I refuse to shut up about is neuroscience. Like sociology, I apply the neuroscience of teamwork to sailing. In an evolutionary attempt toward connection and learning, we have brain cells called mirror neurons. Mirror neurons fire to help us mimic behavior. If I sail properly, my teammate’s brain will be aided through the learning process by imitation. This is why I maintain precise, textbook form when I sail with beginners.

On a more nuanced level, research shows that mirror-neuron imitation also helps develop empathy and kinship between people. On purpose, I try to activate these neurons and these connections. If my skipper is quiet, I stay quiet. If my teammate communicates through animated gestures, I gesture back. I have no scientific data from this experiment, just anecdotal evidence: I get along pretty well with my skippers. I match my teammate’s energy in an effort to neuroscientifically foster connection and learning.

Sailing is the science of teamwork, applied. While other sailors may have more high-intensity takeaways, this is mine. My teammates might race seeking the thrill of the win, and I do, too, but I also seek evidence of the fact that humans can work beautifully together. Sailing consistently gives me exactly that.

Sometimes, my application of behavioral science to sailing is less elegant and more cautionary. In the most evolutionarily ancient parts of our brains, we have the essential instinct to just keep breathing. Once in a while, when a sailor isn’t listening to me, I’ll say something like, “Hey, if you don’t [move the tiller/trim the sail/hike harder/whatever], this boat is going to flip.” I imagine the instinctual, lizard-like part of their brain (the medulla oblongata in particular, which holds our breathing instinct) kicking into high gear.

They generally fix what they’re doing wrong out of sheer self-preservation. And if they don’t correct themselves? Splash. They’ve got a brand-new, action-packed, almost-drowning, Sailing Story to tell.