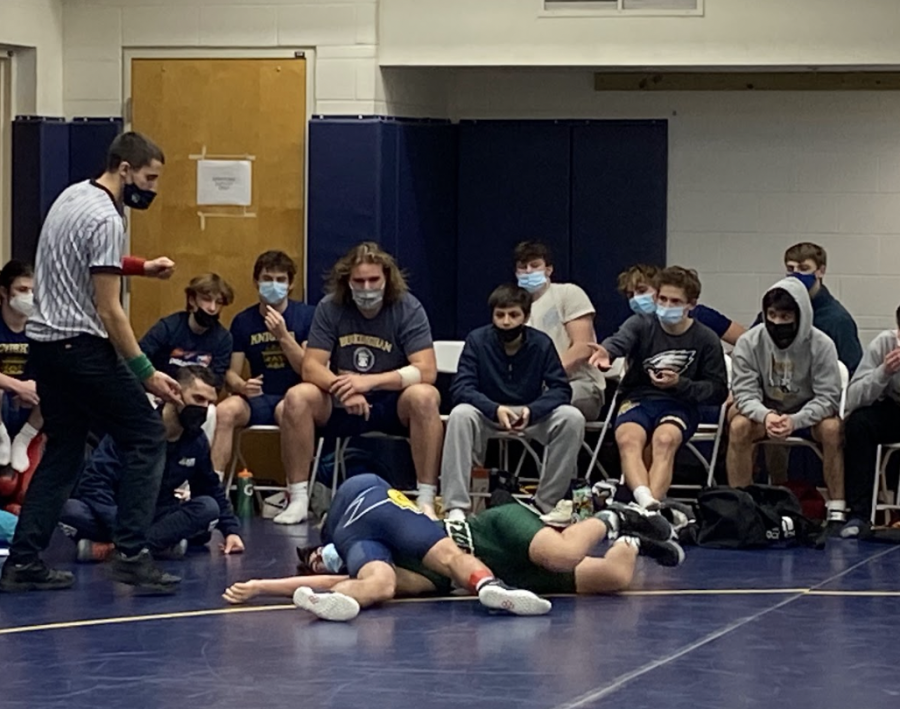 Varsity Wrestling had nowhere to go but up after last season’s practices of tackling human-sized dummies in tennis courts, Co-
Captain Angus Crafter ’22 said. Varsity Wrestling closed its season with a 2-12 record, led by Angus and Co-Captain Ethan Beagle ’22.

“I’m just happy that we had a season this year,” Angus said.

In previous seasons, captains would organize dinners at their houses before and after meets. Due to not everyone being able to attend indoor dinners this year, the team became closer by appreciating practice time more, Angus said.

Angus has had to find new ways to celebrate the team and help everyone get better at wrestling, he said.

“Rallying around the underclassmen who win their matches and pre-match pep talks are how we bonded,” Angus said.

Head Coach Henry Kasdon ’98 said the team’s greatest strength was their adaptation to whatever the season threw at them.

“This season has been full of challenges: complicated scheduling changes, navigating ever-changing masks and testing mandates, and ‘How do we keep enough kids healthy to fill out a lineup?’”

Coach Kasdon’s highlight from the season was when Brooks Hawkins ’24 achieved a goal he set at the beginning of the season, he said.

“After being quickly pinned in Brooks’ first match of the year, the highlight this year was when he pinned the same opponent during his semifinals.”

Coach Kasdon is proud of the team’s work this season and particularly their performance at the Graves Kelsey League Tournament, a competition against the whole Independent School League, which took place on February 12. After only two team wins during the regular season, Varsity Wrestling finished the tournament in sixth place out of 12, improving on their 10th place finish in the 2020 Graves Kelsey League Tournament.