Trivia club puts knowledge to the test at quiz bowl 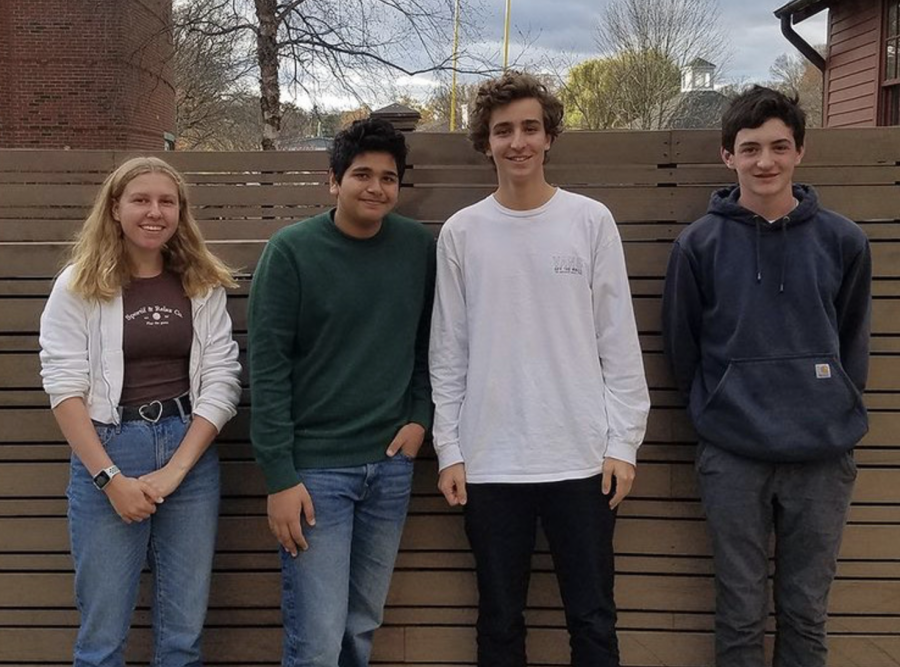 Have you ever wondered what the capital of Pakistan is? Or what the third longest river in the world is? For members of the Upper School (US) Trivia Club, knowing the answers could be the difference between total victory and utter failure, Trivia Club Co-Founder Bradford Kimball ’24 said.

“I had watched the High School Quiz Show as a kid, so being there felt like living a childhood dream after watching and re-watching all the episodes,” Bradford said.

After qualifying for the show this fall by passing an entrance test on which they scored in the top 12, BB&N competed against Lincoln-Sudbury High School in four rounds: the multiple-choice toss-up round; the head-to-head round; the category round; and the lightning round.

For the first three rounds, Trivia Club maintained a steady lead. Going into the final round, the team was leading 615 points to 575 points but lost the critical lightning round and ended the competition losing 895 points to 795 points. This loss resulted in BB&N’s elimination from the tournament in their first match.

Henry said it’s difficult to know what to expect having never competed in a real trivia competition before.

“I was a little nervous about the idea of being on TV, but I was confident in my trivia skills,” Henry said.

Leo attributed their early loss to nerves and a lack of competition experience but said he knows the team has “a bright future.”

“What happened in the last round was very uncharacteristic of our abilities. We got unlucky with questions none of us had encountered,” Leo said.

After having a taste of trivia competition, Trivia Club has full intentions to join the same competition and more next year, Leo said.

“I am proud of everyone on the team. We put up a great score, but we caught a few unlucky breaks. Even just making it on the show is a great success.” Leo said.

Trivia Club is founded on learning general-knowledge facts, promoting conversation, and “destroying opponents” in competitions, Leo said. After talking to friends at other local schools with popular trivia clubs, Bradford and Leo started the club this fall after a year of planning.

According to Leo, Trivia Club has two practice styles: laid-back trivia, and fast, competitive trivia to prepare for the contests. Bradford taught the team through re-watching old Jeopardy episodes and practicing trivia lists from the internet.

“I mainly run the less competitive, chill side of the club. We play fun trivia games and learn new things. Trivia is a great de-stressor.” Leo said. “Bradford does the leading for the competitive side, where they practice for competitions.”

“He’s the perfect faculty advisor for this club since he shares the common love for trivia and is committed to growing the trivia community,” Leo said.

Mr. Parsons said Trivia Club’s members’ enthusiasm and desire to improve is their greatest strength. Since it’s their first year, he said, he had no expectations going into the competition.

“Many of us didn’t know what to be ready for, but now we’re ready. We’ve already talked about plans for next year. This started as a casual way to have fun, but as we continued, it became more committed and organized, despite our inexperience.”

Mr. Parsons said this program has the possibility to grow.

“We encourage everyone to stop by and try the club out. We want to extend the appeal of this serious program to all,” Mr. Parsons
said.

The Trivia Club meets on Fridays during Community Activity Block and encourages new faces to join them for fun trivia or to try out to join the competitive trivia team.