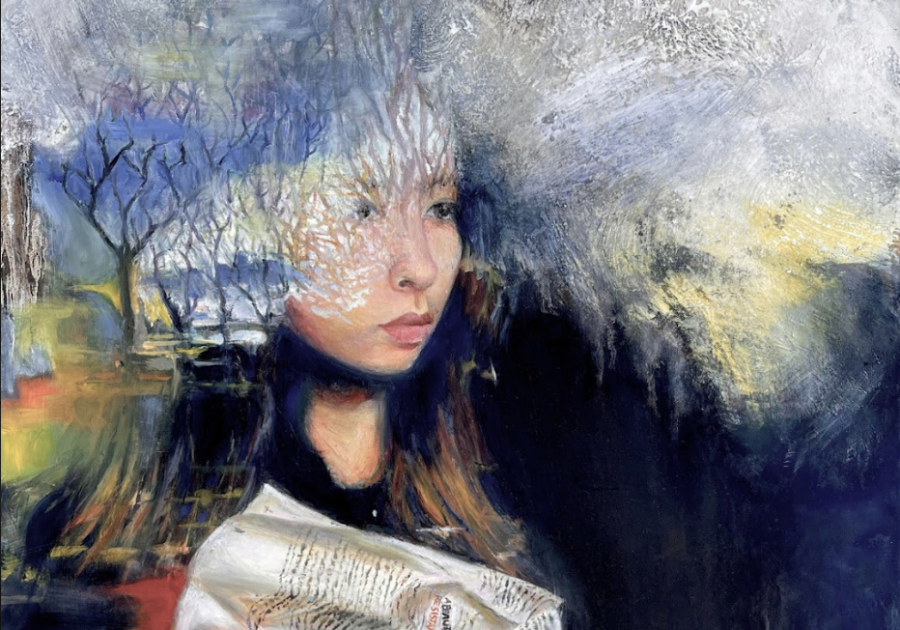 “Six months will pass, six glorious, gorgeous months during which her freckles turn to flowers and fire sprouts from her lips, and she will talk herself into thinking the cold might not be so bad this year,” wrote CC Chung ’22 in her short story “Pomegranate Seeds,” one of the nearly 230,000 works in 28 different categories of art and writing created by students across the country and submitted to the regional Scholastic Art & Writing Awards (SAWA), a nonprofit organization that gives students a platform to showcase their creative works.

CC’s “Pomegranate Seeds,” which received an honorable mention, is a retelling of the myth of Persephone and Hades, which CC said was inspired by the musical “Hadestown.” The two main characters of the short story, Penelope and Henry, are a couple facing the challenges of mental health and love. CC said she wanted to portray the perspective of a teen struggling with seasonal depression.

“The knowledge that you are not providing what the other person needs while being unable to do so for yourself, no matter how much love you feel for them, is still a challenge,” she said.

CC also said she experiences changes in her mood more frequently in the winter and reflected her own experiences in the story.

“Writing this story helped me put my feelings into words,” she said.

Olivia Bancel ’22 received an honorable mention for her photograph, “Social Media,” which features several phones and cameras pointed at her subject. Olivia said she was inspired to create this photo by her “difficult relationship” with her phone and social media.

“In this piece, I wanted to portray the pressure that society has on us, and especially girls, to always present ourselves happy and beautiful on social media.”

Gillian Goddard ’22 won an honorable mention for her personal memoir titled “Growing Pains,” which was about growing up and her relationship with her older brother. Upper School (US) English Teacher Zoe Balaconis, Gillian’s teacher, described her work as open and sincere.

“Gillian’s essay described the world outside and the one within with unblinking candor and poetic musicality,” Ms. Balaconis said. “Gillian was able to pick up feelings and glances and gestures and turn them around in our hands like a polished stone.”

Daniel Wang ’22 won an honorable mention for his short story “Nice Guy,” which he wrote for US English Teacher Sharon Krauss’s Fiction Writing class. Although he has submitted pieces in the past, Daniel said, he didn’t expect to win anything.

Anji Friedbauer ’22 won three Gold Key awards and two Silver Key awards for her four individual paintings and her senior art portfolio, which is a series of six works submitted together that represent a single theme.

“My pieces this year were all informed by some aspect of life during COVID, as I wanted to make my body of work relevant to the world around us,” Anji said.

Anji said “A Beautiful Resistance,” was her favorite piece she submitted.

“It was one of the earlier pieces I did and I had a lot of fun figuring out a style and how I wanted to paint it, as well as experiment with plaster on oil paint for the first time.”

Aparajita Srivastava ’25, who received her first Silver Key this year after winning Honorable Mentions the past two years, is the only freshman who won a SAWA accolade.

Aparajita said her family and the show “Gilmore Girls,” were inspirations for her short story “Lorelei’s Summer Solstice.”

“I was inspired by the show ‘Gilmore Girls,’ the craziness of my family, and I’ve been told that I’m very good at dialogue, so I wrote a piece solely focused on that.”

While writing “Lorelei’s Summer Solstice,” Aparajita sought to craft a funny and relatable story for the reader, she said.

“The main message of my piece is that family is family no matter how crazy they are, and I definitely want people to laugh and relate to my story because we all have crazy families.”

Those who won a Gold Key for their pieces this year are being considered for national SAWA recognition, and SAWA plans to announce national medalists on March 23.