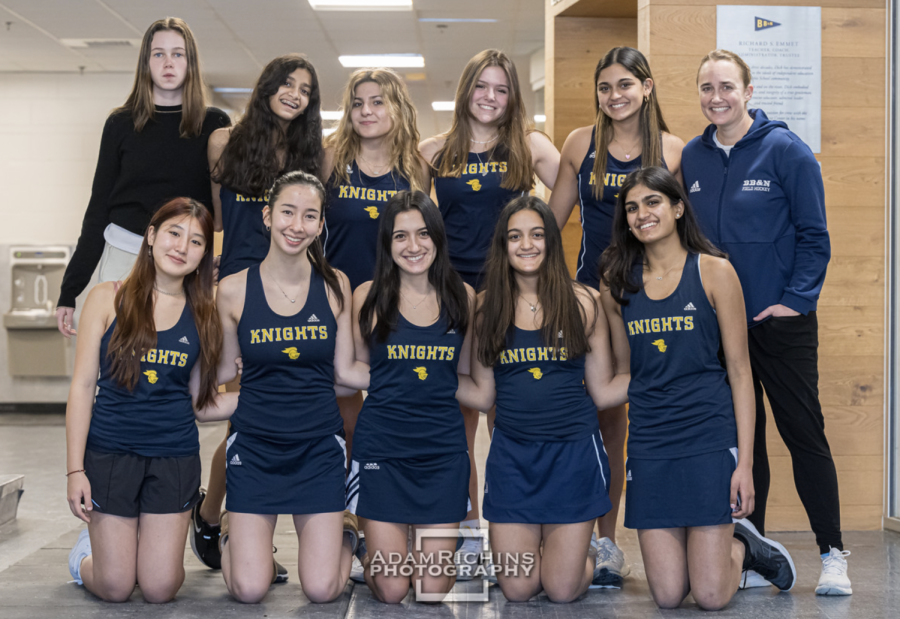 This season, the Girls Squash team won six of 12 of their matches, which were all away, and focused on rebuilding their team after not having a season last year. The team approached the season with a grateful attitude and a desire to improve despite the difficult training schedule, Co-Captain Anika Desai ’22 said. One moment that stood out to her, she said, was arriving at Tufts for a 6:00 a.m. practice only to find out it was canceled.

“It was tough because obviously we were all so tired, but the team stayed really positive, and everyone showed up at 6 a.m., even though that practice was optional,” Anika said. “I think this experience speaks to the team’s willingness to put in their full effort 100% of the time, even though we’re always practicing at crazy hours.”

Additionally, the team got the chance to compete at New England’s, where they placed fourth in Class C, and Nationals, where they placed 15th in division 3. These tournaments allowed them to cheer each other on in a competitive environment, Co-Captain Maya Benjamin ’22 said.

“When I was on the court, it was so great to look out between points through the glass of the court and see my team sitting out there in the stands cheering me on,” she said. “Especially at New England’s, when the stakes were higher than our typical matches, it was so great to have their support constantly present.”

“It’s exciting to watch the athletes play and improve with every single game. Just seeing that resilience and that fight is so rewarding as a coach,” she said. “I think even if they don’t end up with a win in the end, the effort that this group puts in on the court is really awesome.”