Juniors and seniors speak about sex 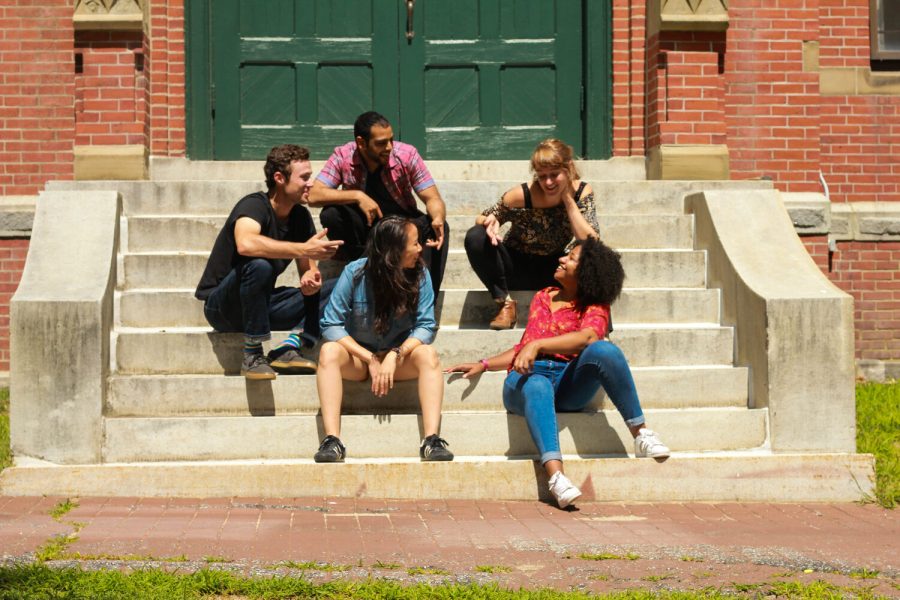 After running onto the stage to the song “I Just Had Sex” playing in the background, five performers from Speak About It, a non-profit that teaches high school and college students about healthy relationships and consent, put on a one-hour show for juniors and seniors on February 7. The performers offered a combination of real stories, skits, and advice to students in its mission to promote awareness of healthy sexual choices, advocate for consent, and prevent sexual violence.

The school first contacted Speak About It in 2015 after Upper School (US) Counselor Sarah Vollmann discovered and appreciated the organization’s work at Governor’s Academy.

“BB&N brings in Speak About It because we feel they offer a unique and effective approach to talking about consent, healthy relationships, and sexual assault,” US Counselor Doug Neuman said. “When we’ve had them here in the past, they have been well-received.”

The school has hosted Speak About It every other year since 2015. On the alternating years, One Love, a different non-profit specifically focused on abuse in relationships, has come to present films on dating violence. After either presentation, peer counselors facilitatesmall group discussions.

The discussion aspect after these presentations is important to solidify students’ ideas, Mr. Neuman said.

“Our hope is that we can find ways to continue these conversations in smaller groups, different kinds of settings—perhaps student-only as well,” he said.

At the start of the show, the actors came on stage and introduced themselves with their names and pronouns. To set the tone of the discussion, they defined terms such as identity, asexuality, queer, and gender fluidity. This reinforced the importance of inclusivity.

The performers spoke about embracing yourself for who you are and being open to learning from others on your path of sexual discovery. They also emphasized the importance of consent before sex; they recommended talking with your partner beforehand to ensure both of you are on the same page and explained an emphatic “yes” should be the only acceptable answer. To highlight their points, the performers read and performed true stories of positive and negative sexual experiences from students of different sexualities.

“Throughout the performance, the actors were very dynamic and engaging,” Madeleine Brodeur ’23 said. “I thought it was balanced in a very interesting way. The actors added humor while also talking about very serious subjects.”

Some scenarios were based on the school’s location, which made them realistic and relatable for students, Mike Veson ’23 said. For example, in one scenario, an actor asked another if they wanted to get Insomnia Cookies and then “Netflix and chill.” Another scenario followed a couple going on a walk by the Charles River.

Speak About It succeeded in making the performance applicable to every student, Mike said.

“The variation throughout the performance added a lot of diversity, making at least one scenario where everyone could see themselves in,” he said. “The scenes at the party were especially relatable and informative.”

Additionally, the performance built on a lot of the topics students had previously learned about in Sexuality and Relationships (S&R) classes, Rohan Badani ’23 said.

“They reinforced and added to my knowledge in S&R by providing real-life examples that included applications of skills and information I had learned in the past. I liked the bystander intervention situations because it’s really important to look after your friends but also make sure they can have fun and find a good ratio of both.”

Some aspects of the presentation could be improved, Maggie Gohlmann ’23 said, like the scenes in which the performers demonstrated helping a friend out of a difficult situation.

“I wish there were more scenes where you thought a stranger was going to go home with someone rather than an acquaintance or friend,” she said.

“It seemed more college-student oriented than it did for high school students. Most of the scenarios were taking place on college campuses, and they referenced dorm rooms a lot,” she said. “I wish it were more catered to high school students, but it was still a good learning experience to prepare students for upcoming college life.”

After the performance, the classes were divided into smaller groups to have discussions led by Peer Counselors, where students addressed hookup culture, helping friends in an unhealthy relationship, and being active bystanders.

Peer Counselor Tess Holland ’23 saw a lot of value in the performance and hopes her fellow students learned something, she said.

“I thought this was a better way to talk about these issues that are really important other than the standard Sex and Relationship class,” she said. “My discussion focussed on issues that come up in BB&N and sharing our own experiences with this.”

Sammy Krem ’22 said he felt comfortable participating in the discussion.

“It wasn’t very awkward; I liked how the discussion was very open,” he said. “I didn’t feel nervous when I spoke, and the facilitator kept the discussion engaging.”

The school plans to host One Love in 2023 in order to continue educating students about the importance of consent and positive relationships.