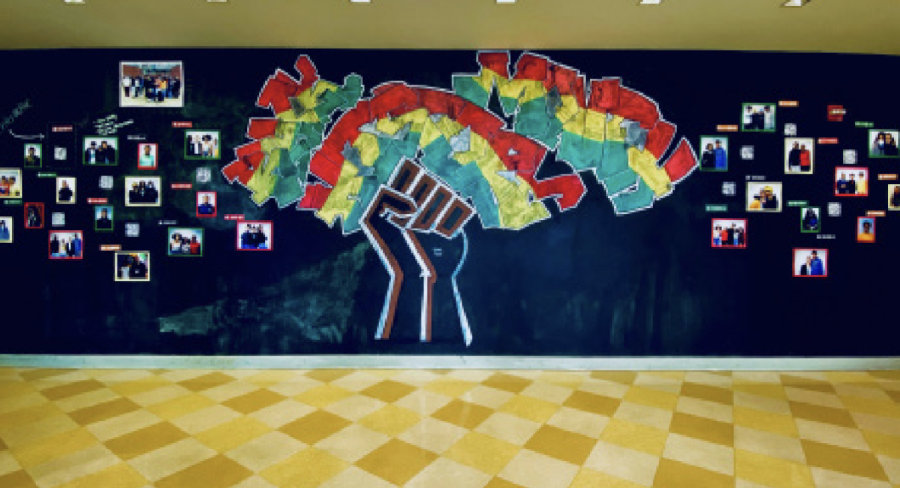 Just before the Upper School (US) Almy Library, the wall-size chalkboard explodes with color—graffiti, construction paper with Spotify links, portraits of Black community members, all centered around a colorful drawing of a raised fist.

“I knew from the start the fist was something I wanted to do,” Kallie Francisque ’22, the creator of the mural, said. “That’s a monumental symbol across the board of Black history and power, so I thought, ‘That’s perfect. That’s what I need.’”

Kallie, with help from Library Co-Director Camille Hoven and several students, spent most of February designing and creating the mural in
celebration of Black History Month. The school also celebrated with a new advisory curriculum, dedicated discussions in certain affinity spaces and
classes, Middle School (MS) and Lower School (LS) curricular innovations, and a poetry meeting hosted by Parents of Black Students (PBS).

Miley Chen ’25, who happened upon Kallie and the mural one day and offered to help, said she learned a lot about Black History Month at the school and in the world by working on the mural.

“It’s not just a title of Black History Month. It’s a community with people behind it—people who care and people who are passionate.”

Miley originally volunteered to help with the mural when she was “procrastinating and looking for something fun to do,” she said, but the work soon became more meaningful.

Under Kallie’s leadership as “the conductor of the whole thing,” Miley said, she saw other students learning, too, specifically from the QR and Spotify codes that link to stories and music from Black history.

“I am so excited that the chalkboard was really student centered. I see the joy it brings people when they pass it, when they talk to Kallie, and that is
wonderful. It’s a real celebration. I hope we can continue to emulate that.”

Ms. Hoven, together with US English Teacher Alda Farlow and US Dean of Students Rory Morton ’81, using student input from a meeting she hosted
for Black students, designed an advisory lesson in which each advisory discussed a quote from Martin Luther King Jr., learned about important moments from Black history, and made posters celebrating several facets of Black history and culture.

“Since the Martin Luther King Day (MLK) assembly was postponed due to the Omicron variant of COVID-19, we thought it’d be good to do something with MLK Day and Black History Month and also have it be student empowering and student centered,” Ms. Hoven said.

“When we were talking about the MLK quote, it got a little intense in a good way,” she said. “It helped me understand my advisees better.”

In making the posters, advisories discussed the Student Nonviolent Coordinating Committee (SNCC)—a group of students in the civil rights movement who promoted change through sit-ins, marches, and posters which inspired posters relating to history and to the present, Ms. Hoven said.

Over on 80 Sparks Street, students spent time researching Black inventors, and some emulated their inventions in the “maker space,” a creative hands-on lab at the middle school.

MS Science Teacher and Science Club Leader Marnie Klein, who led a group of students in researching inventors and creating matchbox microphones in the science lab, said learning about Black inventors is helpful for students’ “identity formation” at this stage in their development.

“The more we can expose students to folks of all backgrounds who are succeeding in science and in STEM, the more they can start to help their identity formation and be more open to all sorts of ways of being as a person, as a future professional, and as a student,” she said.

Ms. Klein said taking the time to discuss these “lesser-known” inventors is also very important for the students’ understanding of certain fields.

“I hope they take away the rich history of Black scientists and Black physicians and Black engineers in STEM and the continued need for
representation in these fields,” she said. “I hope that they start eroding
that impression of the one way to be a scientist and the one way to be in STEM, they start eroding ideas of stereotypes of what people are and who people can be.”

The research students did on Black inventors was a part of a collection of “small imprints to celebrate and honor Black History Month,” MS Diversity, Equity, Inclusion, and Global Education (DEIG) Practitioner Tiffany Rice said.

“We want to offer a lot to our students, but we also understand that there are limitations to what time can allow,” she said. “What I’ve been really thrilled about is when students choose [to do] something [like the “Knight Lab Projects”], they are really fully engaged.”

Ms. Rice said she’s found that the students who come into the MS from the LS already have a lot of knowledge about Black history.

“They’ve got a really wonderful foundation, and I think covering [Black history] in middle school just gives them an opportunity to go deeper and to get a little bit more sense of context,” she said.

Lower School (LS) students, like the middle schoolers, have spent Black History Month researching Black inventors. In addition to the research, the lower schoolers created final presentations about their inventor to
display at an assembly. Third to sixth graders shared their work with each other in one assembly and Beginners to second graders shared their work in another.

Theo Cheatham ’30—who studied Raye Montague, an American naval engineer who created the first computer-generated, step-by-step process for building a US naval ship—served as one of the presenters at the third through sixth grade assembly. During his presentation, Theo shared a phrase that he had drafted as a part of his class’s Black History Month celebration and that held meaning for him.

“My sentence was you don’t know what I know,” he said. “I chose
this because we all know something, but you might not know the same thing as other people.”

Noah Williams ’30, who is in Theo’s class, said he was nervous for the presentation beforehand because of the large audience but was ultimately excited to speak in front of his peers.

“I felt good because I was looking forward to it, so I was super happy when we finished.”

Filled with presentations about individuals like the creator of the ice cream scoop or the pencil sharpener, LS DEIG Practitioner Emma Price said, the assembly offered the LS community knowledge of how Black inventors have impacted the world around us.

“I hope [the students] see how integral the contributions of the Black community have been to their daily lives,” she said.

Ms. Price said she was impressed with the teachers’ “creativity and ingenuity” while working on research projects in their classes. Taking the time to have meaningful discussions to center and celebrate Black joy was a main goal this month, Ms. Price said, and she said she thinks this goal was achieved.

“Too often Black history is synonymous with enslavement when there’s just so much more to learn and to explore,” she said. “Our goal is to help the Black students who are in our community feel affirmed and seen and celebrated and for our students who aren’t Black to really value and appreciate the contributions of the Black community, as well as just knowing this is an integral part of how we got to where we are today.”

US Diversity, Equity, and Inclusion Practitioner Maria Graciela Alcid shared a similar goal and said the month was focused on “celebrating Black joy and Black excellence.” The celebration shouldn’t end on March 1, she added.

“One goal is how to amplify and center the voices whose identities are being celebrated. Simultaneous, we need to recall that Black History Month is not just this month; it is every month.”

Ms. Alcid said the mural, advisory discussions, and LS and MS presentation of curricular work promotes school values of coming together to celebrate one another.

“To see people stop, enjoy, engage, and celebrate the work of our community members feels deeply rooted in our mission and honors the rich funds of knowledge, creativity, culture, and potential we have here at BB&N. My hope right now is: how do we continue to build on that?”