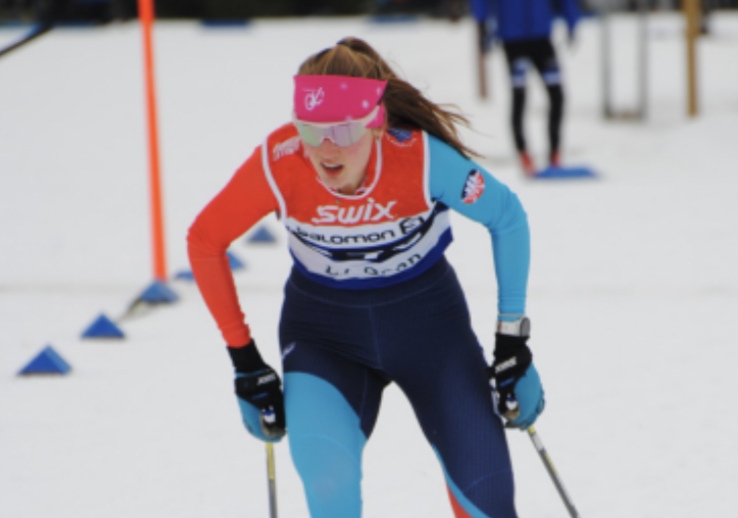 Although spring has begun and snow no longer covers Massachusetts, cross-country skiers Evie Walton ’23 and Gil Cavalieros ’25 will continue to train year-round. They only compete from December to March, snowfall permitting, so they can’t enter the season cold, Evie said. This past winter, Evie placed tenth out of 100 competitors at the Junior National Cross Country Ski Championships in the five-kilometer race while Gil placed fourth out of 40 competitors in the Junior Biathlon Championships.

Evie began cross-country skiing at two years old after seeing the enjoyment it brought her parents, aunts, uncles, and cousins, she said. After skiing recreationally from ages two to eight, she began to cross-country ski competitively as she loved the challenges that the sport presented, she said.

“I love pushing myself as hard as I possibly can, and skiing is a great way to do that both physically and mentally,” she said.

Evie skis for the Eastern Massachusetts Youth Cross-Country Ski Team (EMXC), which is based out of Weston. The team trains on the Leo J. Martin Ski Track from late November to March with artificial snow to keep the course operational. Evie competes with the team most weekends in the winter and trains four days a week for several hours each day.

“It is a very physically-taxing schedule, but you just have to push through,” Evie said.

In addition to training with the team, Evie travels to Vermont during vacations to train on more mountainous terrain. When the snow melts, Evie continues to train on roller skis. This special equipment allows her to continue to train in the offseason and outperform her competitors, she said.

While the races are important, Evie said, her favorite part of the sport is the small, tight-knit community which allows for friendly interactions while preserving the competitive nature of the sport.

“My favorite [cross-country skiing] memories are after the competition when we relax as a team. We’ve all been through similar physical pain, and [we bond] over it,” Evie said. “If someone’s had a great race, we can all be really happy for them. But if someone had a disappointing race or crashed, we can be there for them as a team and support them.”

Evie plans on continuing to lift weights in preparation for her upcoming races next November.

Gil specializes in five-kilometer and 10-kilometer races. He also skis the biathlon, which is composed of both rifle shooting and skiing. To prepare for the biathlon, Gil and his team practice their cross-country skiing at the Leo J. Martin Ski Track–the same facility Evie’s team uses–and their shooting at the Harvard Shooting Range.

After traveling to Lake Placid, New York, last winter for the Junior Biathlon Championships, Gil was able to see all his hard work pay off, he said.

“Getting fourth was definitely one of my biggest, if not the biggest, achievement in [my cross-country skiing] to date, and I’m excited to keep working and see if I can do better,” he said.

Gil said he enjoys the biathlon event because of the two different challenges.

“[It’s] a great balance between a tough physical workout and accuracy,” he said. “When you get to the shooting, you have to try and slow your heart rate down as quickly as possible in order to be more accurate.”

“One of [my] biggest challenges is motivating myself to go train,” he said. “But that’s what is so rewarding about the sport. You push yourself almost to the breaking point but then you see how much better you are at the races because of it.”

Quentin Higgins ’25, a classmate of Gil’s, respects his dedication and enthusiasm for the sport, he said.

“Training [as much as Gil] seems very difficult,” he said. “I really respect Gil for being able to do so well at a sport that intense.

Gil is taking a couple of weeks off before continuing to train to compete at a higher level next season, he said.