Greatness of a granita 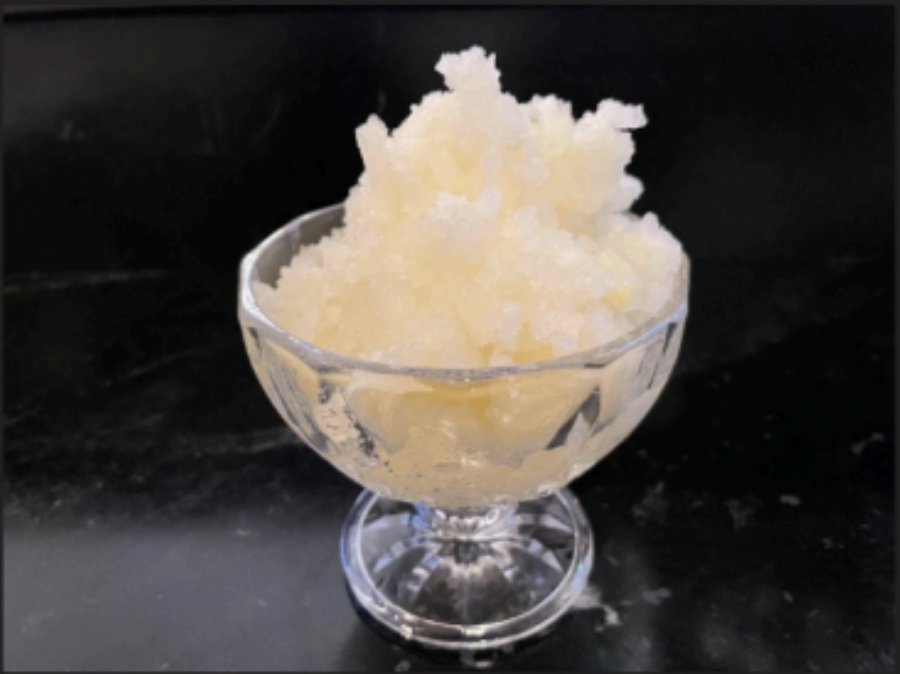 I love this dessert. It’s elegant, seductive, and incredibly flavorsome. Far too often, desserts are just… boring. While desserts should incorporate a sweet component, they should never be one-dimensional. This dessert is anything but that. The combination of lemon juice and sugary syrup that serves as the base of this frozen treat refreshes the palette, while ginger adds an unexpected heat that cuts through the sugar and acid. This is not a rich dessert but rather light and exciting. For those who appreciate cuisine and are willing to try new things, this dessert’s complex flavor profile and incredible history will make for a perfect ending to a meal.

Most often associated with Sicily, the granita remains an important element of the island’s culinary heritage. Common flavors include lemon and almond, while the texture of the frozen dessert varies by region. Typically, granitas from the north are chunkier, while those found further south take on an incredibly smooth, sorbet-like texture. This recipe produces a somewhat chunky texture found in Palermo: Sicily’s capital located on the northwestern coast.

The frozen dessert holds ancient roots dating back four thousand years. Ancient Mesopotamians would take trips to Mount Etna in central Sicily to collect snow to store in caves for culinary purposes. The presentation of the granita continues to reflect these roots. In 900 B.C., after conquering the island, Arabs brought sugarcane and lemons to Sicily. They also brought sherbet, a frozen drink which served as an early model of the granita.

Though the Arabs also introduced many spices to Sicily including ground ginger, fresh ginger seldom appears in traditional Sicilian cuisine. However, the root lends itself well to Western cuisine. It has become an important ingredient in contemporary French cuisine specifically and has appeared in numerous renowned dishes over the last fifty years. Even the island of Sicily itself has begun to cultivate the root.

While I came up with the pairing of lemon and ginger simply because I thought the flavors would work well together, the idea is not so far-fetched given recent developments in the culinary world. Ultimately, food should make sense. Many people think that cooks throw random ingredients together to see how they work. That’s not cooking; that’s a fifth-grader’s science experiment. Just as an articulate person thinks before they speak, a good cook thinks before they cook. If you take the time to cook, honor your ingredients and do it the right way. Make mistakes but make an effort!

Perhaps my favorite part about this dessert is its dependability. It does not require incredibly complex technique, and the processes involved are easy to replicate. This dessert can be made hours in advance, enabling cooks to concentrate on executing other dishes that require close attention (e.g., the preparation of proteins, vegetables, starches). Not only do I thoroughly enjoy this dessert, but I have found it to be an absolute lifesaver when preparing time-intensive meals in which the main courses require immense attention to detail. It is undoubtedly a useful addition to the repertoire for any cook.

Note: Traditionally, the ratio of lemon juice to water is 1:1, but I find this frozen drink to be a bit sour when using lemons grown in the United States–they tend to be quite large, mass produced, very pungent, and sour. Feel free to add more lemon juice if you want a more sour dessert, but be cautious! Be sure to taste the granita before freezing to make sure it’s not too tart for your liking.

A heaping portion of lemon and ginger granita intended for two. The dessert should appear like a pile of snow, an ode to the drink’s origins. Because of the dessert’s intensely acidic and hot flavor profile, I recommend consumption in small quantities so the dining experience is entirely pleasurable.

Instructions:
1) Combine water and sugar in a shallow saucepan. Slowly bring to a boil using a medium-low heat so as not to burn the sugar. As the water heats, use a whisk to dissolve the sugar.
2) Remove syrup from the heat to cool.
3) Squeeze the lemon juice into the syrup once fully cooled.
4) Finely grate ginger into mixture.
5) Use a colander to strain any large ginger chunks or lemon seeds.
6) Freeze for about four hours, mixing with a fork every hour to create desired texture.
7) Grate additional ginger to taste, and mix thoroughly.
8) Serve in dessert glasses, and grate additional ginger over top if desired.